{State of the Kitchen} Part 16: I Can Touch the Light!

Can you believe it? I know I can't! I thought this day would never get here.
I had a friend who tiles for a living do our backsplash. That was the 1 thing in this whole project that went off without a glitch. Ben did such an amazing job:


We thought the countertop was put in without anything going wrong, but we were mistaken. The light caught the corner of the sink just right for me to notice this:

It's hard to see in the pictures, but there's a "milky" spot. When I first saw it I thought maybe something they used to put in the sink got on the countertop. I used my granite cleaner but it didn't come off. I sent the pictures to the designer at Home Depot. She said she sent them on to the countertop people, but as of Wed.  evening (when I'm writing this)I haven't heard anything. (Big surprise, huh?)  Ben (my tile friend) said he thought they could just buff it out.

Monday, I plugged up my coffee maker, but it didn't come on. I plugged it into the lower receptacle, and it worked. AND, when I turned on the garbage disposal, it didn't come on. CH got it to come on by flipping the switch quickly. I emailed the contractor & the electrician came by yesterday afternoon. The electrician said that the outlet where I put the coffeemaker was bad. He said that he had some bad ones mixed in, and we got a bad one. REALLY??? He also replaced the switch for the garbage disposal, so that's all good now.
So...what's left? I sent these pictures to the designer and asked her if this is what the corners were supposed to look like: 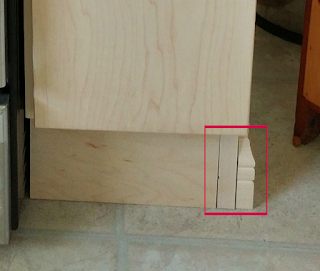 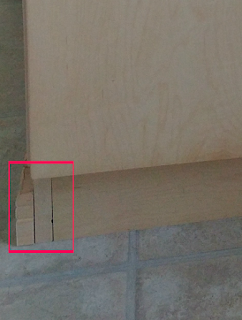 I thought they looked unfinished. She said that they should have carried the toekick all the way to the edge. That will have to be fixed. Also, apparently there are some touch-ups that have to be done. And then they should be done.
We have some boxes of trim, doors, and tile that need to go back. One of my sisters asked if the contractor will take those back or if we will need to. I told her I didn't want the contractor to take them; I want to make sure we get credit for bringing them back. Oh, and one thing needs to go back that just breaks my heart: 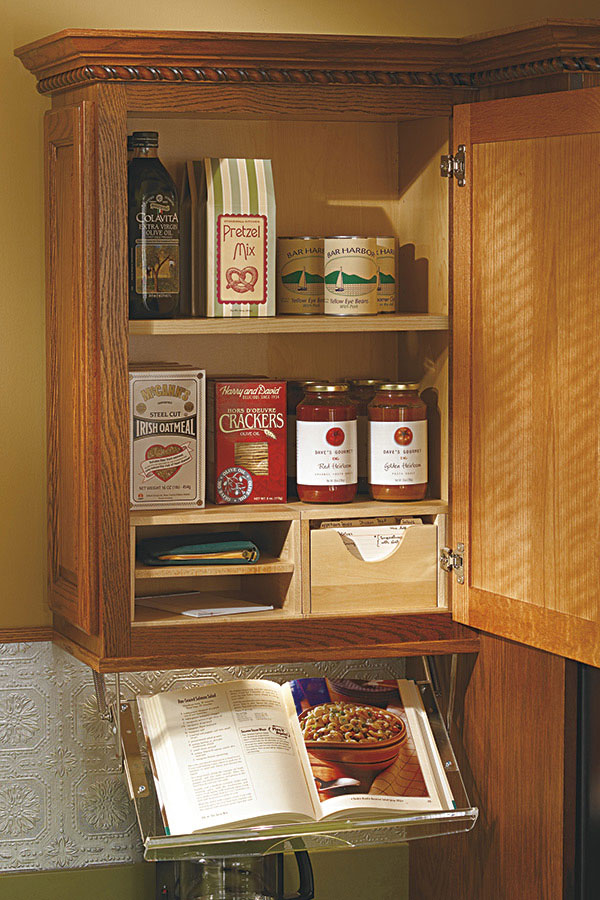 I was told the cookbook holder wouldn't fit since I have undercabinet lights. We haven't double-checked, though. I'm thinking it's a possibility that they just didn't want to mess with it.
We decided to not push the strip in the ceiling. CH said that it is textured, it just needs to be painted. Since we're planning on having the walls painted, we'll have our handyman guy paint the ceiling as well.
We've resolved ourselves to the fact that we're probably going to have to fix the seam in our floor by ourselves.
I am absolutely in love with how my kitchen looks. I knew it would be beautiful, and it certainly is!