It's the last day of September! YIPPEEE!!!

1. Something on your October calendar that makes you smile?Sisters' Weekend. Beginning TOMORROW! Can't wait to spend the weekend with these ladies! 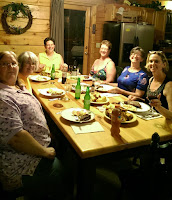 3. What are two or three things you've learned recently as the result of an online search?

I'm drawing a total blank on this one.

4. Share your favorite game day recipe. You can describe it, post the how-to, or add a link to the actual recipe.

5. What are your five essential steps for creating the perfect morning routine?Wake up. Let the dogs out. Take a shower. Eat breakfast. Drink coffee.

6. What small thing have you taken note of today?The little footie things that are are meant to be no-show footwear? Yeah, they don't do the job. I spent almost all day with only the part that goes around your toes in the right spot. Not comfortable at all.

7. Sum up your September in seven words or less.Quick!

8.  Insert your own random thought here
CH & I spent Sunday at a local craft beer place. They had an Oktoberfest Celebration, and we had a BLAST! There was an "Oompah' Band, 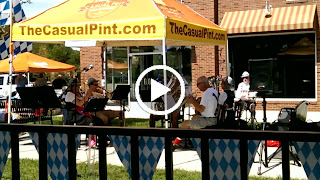 and then a "stein hoisting" contest (that YS won!). 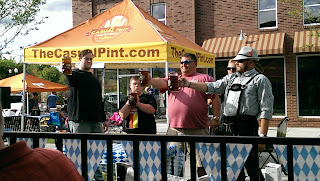 It really made me want to go to Germany for the "real" Oktoberfest!

Falling for the Hodgepodge

I'm pretty sure I've already used the Post Title before, but, eh....who cares?
Joyce has come up with some thought-provoking questions this week (as always), so put your thinking cap on and get started!

1. What have you 'fallen for' recently?
This isn't a new thing, but anything pumpkin. I had my first pumpkin spice latte of the season last weekend...I asked for 1 less pump of pumpkin, and it was perfect.

2. What's something you're 'squirreling away' for later?
If "squirreling away" can also mean procrastinating, then I'd have to say cleaning the house.

3. How do you like your apples? Sweet? Tart? Crisp? Cooked? Apples are one of the superfoods for fall...how often do you eat an apple either plain or as part of a favorite recipe? What's your favorite variety?

Sweet. I usually eat an apple by itself, but I'm definitely okay with eating them within a recipe. Like my MIL's Apple Pound Cake or an apple crisp.

4. According to Fodor's the ten best fall foliage trips in the US of A are-Aspen Colorado, The Catskills New York, The Berkshires Massachusetts, Columbia River Gorge Oregon, Green Mountain Byway Vermont, Enchanted Circle Scenic Byway New Mexico, Great Smoky Mountains of North Carolina and Tennessee, Upper Peninsula Michigan, Lake of the Ozarks Missouri, and Glacier National Park Montana. Which would you most like to visit this fall and why?
I'm very fortunate to be able to call the Great Smoky Mountains "home". Going into New England during the fall is definitely on my bucket list, so I'd say The Berkshires & Green Mountain Byway.

5. The topic of legalizing marijuana was raised in the most recent televised political debate so let's wade in too. Twenty-three states and the District of Columbia currently have laws legalizing marijuana in some form. Four states have legalize marijuana for recreational use. Your thoughts?
Honestly, I could pretty much care less. I'm not going to use it either way. I could definitely see the medicinal purposes, but not really for recreational use. But, like I said, I don't really care 1 way or the other.

8.  Insert your own random thought here.
I finished this season of Longmire last weekend. I even watched a few episodes twice. Now I can't believe I have to wait another year for the cliffhangers to get resolved!!!
11 comments:

This past weekend was the first one that I spent camping since July. CH & YS went last month (we try to get in 1 camping weekend a month), but I didn't go. Our camping group had our Fall gathering at a place about an hour from our house. This was the first time we had visited this particular state park, and it's one we're putting on the list for a re-visit!
We got there on Friday to a heavy downpour/thunderstorm, but by the time we set up camp, it had all but stopped. Even though it was overcast on Saturday, the temperatures were perfect for camping.

We had a campsite that was away from everybody in our group...I have the hardest time looking at a map and deciding which campsite to get! The sites on either side of us were empty, so we had plenty of room (although we really didn't need it).
We spent Saturday exploring the park & catching up on some sleep. There's a really cool dam/bridge in the park that was built by the Civilian Conservation Corps in 1938. All of the material used to build the dam are local; the sandstone for the concrete came by a nearby quarry that is still in operation. It's also the largest masonry structure built by the CCC, and also considered the largest non-reinforced dam in the world.

Saturday night, we always have a pot luck at our gathering. Lots of good food & company! This was the largest one we had been to; we had over 50 campers this time.
Sunday is always sad for me...time to pack up and get back to reality. The weekend goes by way too fast!
We had a really nice surprise on Saturday when I checked the email for our camping blog. There was an email from a woman who works for the Blue Ridge Parkway Foundation. She saw a picture on the camping blog (Flyin' the Coop) and asked permission to use one of the pictures for a fundraiser. I am so incredibly honored to be a part of it, and was very happy that she asked to use it. I'm assuming this is the one she asked to use:

We took both dogs with us this time. I didn't know how Pepper would do all weekend without Laika. She got to the campsite without having a stroke from shaking and panting! (I really need to invest in some "calming pills"!) She was fine once we got there...she's just not a big fan of riding in the car. We did have an incident where she jumped out of the truck...but we were stopped. I'm just thankful there wasn't a car coming. I think it's safe to say that she is definitely not a camping dog!
So...hello, Monday. It's a busy week of work, a meeting at church, and 2 music practices.  Only 3 more weeks until Fall Break, and Sisters' Weekend!

"Someone" had a 90th Birthday on Friday! He started the day with Mass, followed by a breakfast that the "morning mass regulars" arranged for him. I took a half-day so I could get in on the celebration. 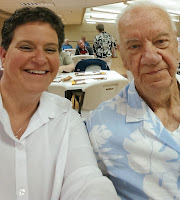 That evening, we met as a family and had dinner and cake & ice cream. 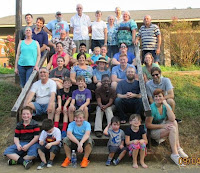 This is everybody, minus (let's see if I can do this without leaving anyone out!) 2 of my boys, 2 sisters & their families, a brother & his spouse, and 2 nephews & their families. So, we were missing a total of 21 people.  I don't think there will ever be a time when we have everybody together!

MS came in from Law School for the long weekend, but we only saw him Friday evening. I guess it will be Thanksgiving before we see him again.

I spent Saturday on another product for my online store. Monday is a "must have" sale: we choose 1 item to put on sale for 1/2 off. In the SLP community, Talk like a Pirate Day is turning into quite the event, and I had a really cute book I wanted to make some activities for. The sale set a deadline for me, so I worked my tail off on Sat. to make sure it was up Sat. night. Here's the cover: 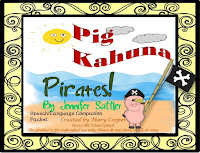 How's that for a catchy post title? I sound like a broken record, but I've really been neglecting this little blog lately. Time to try to get back into it!
This week's Q&A:

1. What's on your September calendar? Anything fun?
We have a little camping trip this month with our camping group. We haven't seen them in over a year, so it will be great fun to see everybody.

3. September is National Courtesy Month...what one act of courtesy would you most like to see more of in your home, town, or the world at large?
Just saying "please" and "thank you" would be nice.

4. Eager beaver, chicken out, clam up, or let the cat out of the bag...of the phrases listed, which one have you related to most recently?
I've really been trying to "clam up", especially at work, more specifically with the speech group. It's working so far!

5. What's your movie theatre snack protocol? Do you chow down on snacks during the previews or wait until the movie begins? Do you buy snacks or refuse to pay those kind of prices? What's the last movie you saw in a theatre? How many thumbs up would you give it?
Is there anything better than movie popcorn? The only problem is that we eat it before the movie. The last movie I saw was Catching Fire. Since I read the books, I knew what the ending was going to be. CH was not amused. (He hadn't read the books.)

6. Henry Ford is quoted as saying, "Nobody can think straight who does not work. Idleness warps the mind." Agree or disagree? Why?
I think you need to have some down-time to straighten out your mind. You can't work all the time!

7. What's the last job you completed or task you performed where you had to 'work like a dog' until it was finished?
I just finished another product for my Teachers Pay Teachers store. I wanted to finish it up because I need to have another item up before the 7th for a special that the SLPs hold the 7th of every month. I've made  a little bit of money so far!

8.  Insert your own random thought here.
Yesterday was a sad day for me. Well, actually the past couple of days have been downers. Ally (my 17 year old schnauzer) had some problems with her hip a couple of months ago.  Last Monday when I came home, the problem was back. I took her to the vet on Tues., and she gave Ally some pain meds and told me to continue it for about a week. She said if it wasn't better, then it was time to let her go. She did quite well over the weekend, but Monday afternoon had a major relapse. Monday night she couldn't sit still; she paced around the house and couldn't squat to urinate. When I picked her up to bring her back inside, she looked at me, as if she was saying that she was ready to go. I knew in my heart it was time. So yesterday afternoon I called the vet and told her I thought it was time. YS & I took Ally to the vet and said our goodbyes. The vet said that her mom passed away 15 years ago and was a huge animal lover. So, she said that she always feels that she is handing the animals over to her when she has to put one down.
That was the hardest thing I've ever had to do, but I know it was the right thing. I sure am going to miss my little princess, though. 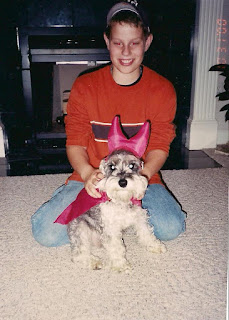