Stephani at A Defined Life is taking a little break.  Don't we all need one every now and then?  Meme or not, I'm doing a weekend wrap-up, especially since we had a pretty eventful weekend.

Saturday morning, CH & I left the house around 5:30 a.m. to take a little drive.  It was actually about a 3 hour drive.  I didn't think I was going to be able to go with him, because I thought I was scheduled to work for the middle school football game.  The middle school played a make-up game before a high school double-header.  Ever since our second year here, the Small Town High School has had to travel to find someone who would play the football team.  We went to Ky. for 3 years (the first year was a complete disaster!), and then travel several hours for teams that would play us.  Last year was the first year we participated in a "Kick-Off Classic" with our rival school.  They played WHS, we played CHS; then this year we switched and we played WHS, and they played CHS.
I realized Friday night that I really wasn't on the schedule, so I was free to go with CH to pick up our his new toy:

It's a "toy hauler":  a small camper that you can haul your "toy" (aka motorcycle).  We originally looked at the "tear drop" campers, but then CH started looking on the internet and found these.  We want to do some camping together, but I have standards when I camp.  I need to have air conditioning; I don't do well in the heat anymore.  Here's what the inside looks like:

The benches in the top picture can be expanded so that it makes a bed, or they can be folded up against the walls to make room for the motorcycle.  In the bottom picture (left to right) you have a microwave, air conditioner, 2 burner stove, and refrigerator.  At first I was a little bummed that it didn't have a sink, but then CH reminded me that there wouldn't be anything that had to be done to winterize it without the sink.  And, he's thinking about buying this: 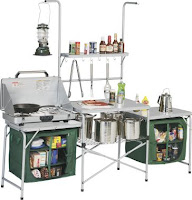 When we went in to finish the paperwork, we caught this little girl taking a nap: 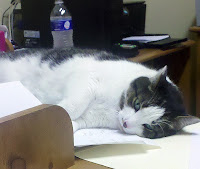 She was a pretty cat, as far as cats go!  She really had some beautiful light green eyes; unusual for a cat.

We got home just to have to head up for the Rival High School's game.  CH runs the chains, so he had to do double duty.  Rival HS won their game, then it was time for the first look of the Small Town's football team: 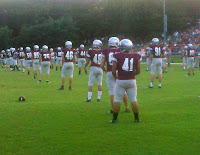 Even though I don't have someone on the football team, it's still exciting to see the boys come out for their pregame tradition.  It was a long day, but a good day, topped off by a 14-7 win!
Sunday was a day to sleep in, do laundry, and do some paperwork for the meetings I have this week.  CH had some more "alone time" for dinner at our favorite Mexican Restaurant: 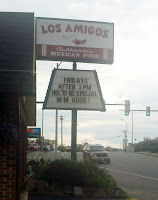 We topped that off with a quick trip to the grocery store.  As we walked back to the car, we saw this: 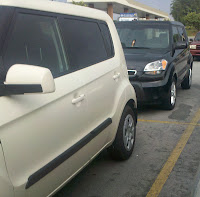 Oh, yeah...it's a Kia Soul parade!  I am still loving my car!  I'm especially loving the gas mileage, and being able to fill the tank for a little more than $30!
The weekend was busy, but good, and this week is going to be another crazy week!  I'm looking forward to things slowing down!
Email ThisBlogThis!Share to TwitterShare to FacebookShare to Pinterest
Labels: camping, Weekend Wrap-up