We made it home Friday night; an hour later than scheduled and without luggage, but we made it!  It was a crazy day.
We got to the airport in Copenhagen 3 hours before our flight.  When we checked in, the guy said that YS & I had our tickets, but the friend did not.  Apparently his booking was cancelled by the airline.  The agent got it straightened out, and gave us our boarding passes.  (Or so we thought)  When we dropped off our bags, they had the friend flying out of Dulles to our local airport, but not YS & me.  So, they put all of the bags under the friend's name and assured us that once we got to Dulles we would have no trouble getting our boarding passes from them.
We got to the gate and were told to have a seat so that we could get our seat assignments.  I'm not a real experienced flyer, but I knew that meant we were on standby.  And, I couldn't get into my email to pull up our itinerary to show that YS & I had seat assignments.  They got us on the plane, and we even got a little bit of an upgrade to Economy Plus, so we ended up with a bit more room.  There was only 1 movie worth watching:  "A Good Day to Die Hard".  Love Bruce Willis in that series of movies!  I slept some, watched the movie, and did a little reading. 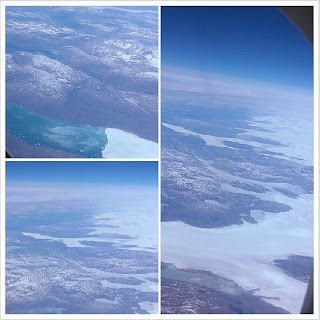 (Greenland from the air...actually from the window in the airplane's bathroom!)
We land in Dulles, and we try to hurry since we only have 2 hours before our flight to home leaves.  The lines in customs were long, and they didn't have all of the desks open.  We got our stamps to enter the USA, then proceeded on to get our luggage to transfer it to the belt so they can be on our flight home.  Except our luggage wasn't there.  We talked to the employee who handles luggage that hasn't shown up, and she had another employee double check to make sure they weren't on the plane.  No luck, so she then hands us a piece of paper that indicates our luggage didn't arrive so we can get through the second part of customs.
Then came security.  I wasn't hopeful that we were going to make our flight home.  The lines were very, very long, and again, not every station was open.  In fact, they only had 4 lines open, and there were at least 2 international flights going through at the same time.  We got through security without any mishaps (that makes me 1 for 3!), but I was stressing the whole time about not having a boarding pass.  I couldn't remember if they checked throughout the customs/security process, but was relieved that nobody asked for it.  We practically ran to the tram to take us to the terminal, then again to the gate.  Right before we got to the gate, there was a customer service desk, so we went up and told the lady that we didn't have boarding passes for YS & myself.  That took all of 5 minutes:  hassle free!  When we got to the gate, we ended up waiting for about 1 hour for our flight to leave, but that was totally fine with me:  it gave us a chance to collect ourselves, make phone calls/texts to home, and check our emails/facebook/instagram.
Once we got home, we had to go to the luggage customer service for the airline to fill out a report.  CH wasn't very hopeful that the luggage would be found.  I always carry my glasses & prescription in my carry-on...well, except for this time.  The drugstore had a refill waiting on me, so I swung by there before I went home.  I also had some souvenirs that I had bought for the boys and their girlfriends in my backpack, along with a gift from CH's uncle.  I came sooo close to putting those in my carry-on, but decided against it at the last minute.  Luckily I had put my souvenir, a couple of gifts for my SIL, something I bought for CH, and of course the candy (!) in my carry-on!  I went to WalMart and bought a new hairdryer, some makeup, a new hairbrush, and a razor, hoping that if I did that, they would find the luggage.
I called the 800 number yesterday to see what they could tell me, and was told that our luggage would be on a couple of flights, but both would be at our local airport late Sunday night.  I got my bag (and the friend's bag) around 8:30 last night.  As of right now, YS' bag hasn't been delivered to the house, but the delivery man said that if it came in after a certain time, it would be this morning before we would get it.
While we were with the group from school in Germany, the adults dubbed this trip "The Miracle Trip", because of some things that happened along the way.  (I'll get more into this when I recap the trip.)  It's only fitting that our trip would end with one more miracle!

Update  (4:45 pm):  I went by the airport to see about YS' bag.  45 minutes later, I walked out with it!
Email ThisBlogThis!Share to TwitterShare to FacebookShare to Pinterest