Since I never got around to wrapping up my weekend from last week, you get a "twofer" this post!
MS embarked on a new adventure on the 31st. He moved away from everything he knows and away from a place where he is very comfortable. CH & I drove 11 hours to help him move into his new home. He'll be attending Law School at a place with this resident: 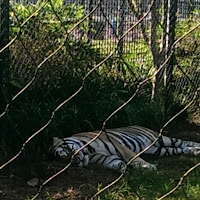 I worked 4 days, then took a day off so we could travel. When we got to the house where he's living, the summer residents hadn't vacated. That wouldn't have been a problem except that we were planning on spending the night there. So, we ended up getting a hotel room.
Saturday morning we unpacked CH's truck & MS' car. One of his roommates (he has 2) was there, so we met him and were able to spend some time with him. He & MS' other roommate are 2nd years, so hopefully he'll get some help from them.
I have a cousin who lives in the same city as this University, so we met him & his wife for lunch. This area is known for its food, and my lunch didn't disappoint at all! I'm curious to see how much weight MS gains...he's going to have to work out when he's not studying to keep from gaining too much.
We bought some groceries and a few other things he needed, then spent the rest of the day relaxing. CH "helped" MS mount the tv wall mount, and MS' roommate grilled burgers & boudin for supper. The roommate left early on Sat. to meet his family for vacation. CH  & I left for home after we got up and were ready. Thank goodness the trip was uneventful.
I feel really good about MS being where he is. It wasn't his first choice, but I think God put him right where he should be. I think he's going to fit in nicely.
I was hoping to meet a Speech Blogging Buddy, but there just wasn't enough time. Turns out she was busy doing things around her house, but we did talk for a few minutes on the phone. Hopefully next time we, along with another Speech Blogger (who I didn't know is also in the area!) can have a "cocktail hour" together.
He was taken care of and settled, so now it was time to check in on OS. I traveled 2 hours this past Saturday to take care of some things with OS. I was about 30 minutes out, and a check engine light came on. I just had my car serviced Friday night, so I figured something hadn't been put on tight enough. My gauges were fine and the car was performing normally, so I wasn't real concerned. OS met me at the dealership so they could take a look at it. There was an update on the sensor that apparently hadn't shown up the day before.
OS absolutely loves where he lives. I got to meet his girlfriend (she got my approval!) during lunch, and I got to visit with my granddog for a little bit.

A new iphone (Merry Christmas, OS!) and some groceries later, and I was back on the road to go home. The interstate right outside of the city where he lives can get a little hairy and nerve-racking with the semis going around the curves, but it was strangely empty as I drive west to home. In fact, I only passed 3 semis on that stretch of road. They have to are supposed to stay in the right lane, so that helps with how fast they're going. There is road work on a bridge about an hour away from home, and when CH & I came back from the Outer Banks, traffic was backed up and not moving. I was prepared to take another route, but I ended up not having to stop at all when I got there. If it hadn't been for the lane being narrow and the pavement not being smooth, I wouldn't have even had to have slowed down. (I would have, of course, since it was in a work zone!)
Since YS is still living at home, I know how he's doing! School starts for him in a few weeks, so he has a little while longer to work as much as he can.
I think I'm all caught up now!