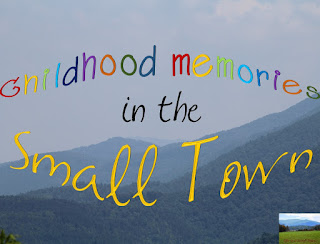 I don’t know about you, but I get very reminiscent during the summer. Life in the Small Town was good all year round, but in the summer, it was heaven.


The past couple of days I was able to have the air conditioning off and the windows open…even during the day. I didn’t like having the windows open when I was growing up, but, not having air conditioning, it was a necessity. My current house has traffic noise, but it’s not the horn-blowing, annoying traffic noise. It’s just "the cars going by the front of the house" kind of noise. The house where I grew up is on a side street, so not much traffic goes by, meaning it was a bit quieter.

I love being able to feel a breeze blow through the house as it comes through the windows. And to smell that fresh air that accompanies it.  The night air is especially wonderful to feel. Hearing the crickets chirping at night and the birds singing during the day truly is music to my ears. Even hearing people talking down the street as dusk falls is extremely comforting.

Summer days were filled with walking to the pool to spend the day. Cinnamon suckers (you know, the big thick kind that were rectangular) were "pool treats". Spreading out your towel among what seemed like a million other towels on the grassy area, and having to run on the concrete to the pool since it was so hot, only to be stopped by a lifeguard's whistle and a quick shout to "Don't run!" once we crossed the bridge over the little creek were daily occurrences.  Having your brother(s) getting kicked out of the pool for the rest of the season for doing something stupid, but then having one of them turn out to be  one of the best lifeguards the pool has ever seen (because he knew all the tricks) is part of my best memories. Walking home at the end of the day, through the park, with my sister; towel and shoes in hand are right up at the top, too.

Evenings were filled with playing kick the can, hide & seek, and roly bats in our yard with the other kids on the street. I don't know why we didn't go to anyone else's yard...probably because the majority of the kids playing were my siblings. There were arguments, but there was also a great deal of laughter and competition. Once it got dark, it was time for the other kids to leave and for us to go into the house for baths, or at least to wash off our feet after being barefoot most, if not all, of the day.
Getting stung after stepping on a bee...do kids today even know what that feels like?  Bike rides around the neighborhood, looking for change on the sides of the road so we could go to the neighborhood store and get some candy...I know kids can't do that anymore. Even if they found change, they wouldn't have enough to buy anything.

Other memories of childhood summer:
Going to sleep with the fans on and waking up cold in the middle of the night if they didn't get turned off.
Hearing the rain (since the windows were open) and having mama or daddy quickly closing the windows.
Hearing music that takes me back to the pool, especially Brandy by Looking Glass (for some strange reason I remember that song being played while at the pool.). Or Dancing in the Moonlight  by King Harvest.
Yep, having the windows open the past couple of days brought back all of those wonderful memories. The only thing that's missing is the slam of the screen door.