Well, I figured it's about time I got around to summarizing Christmas. We got out of school on the 19th and I needed a day to just decompress from school. That Sunday we had our family get-together at one of my sisters' house. As always, there was waaay too much good food to eat, and a lot of good company. 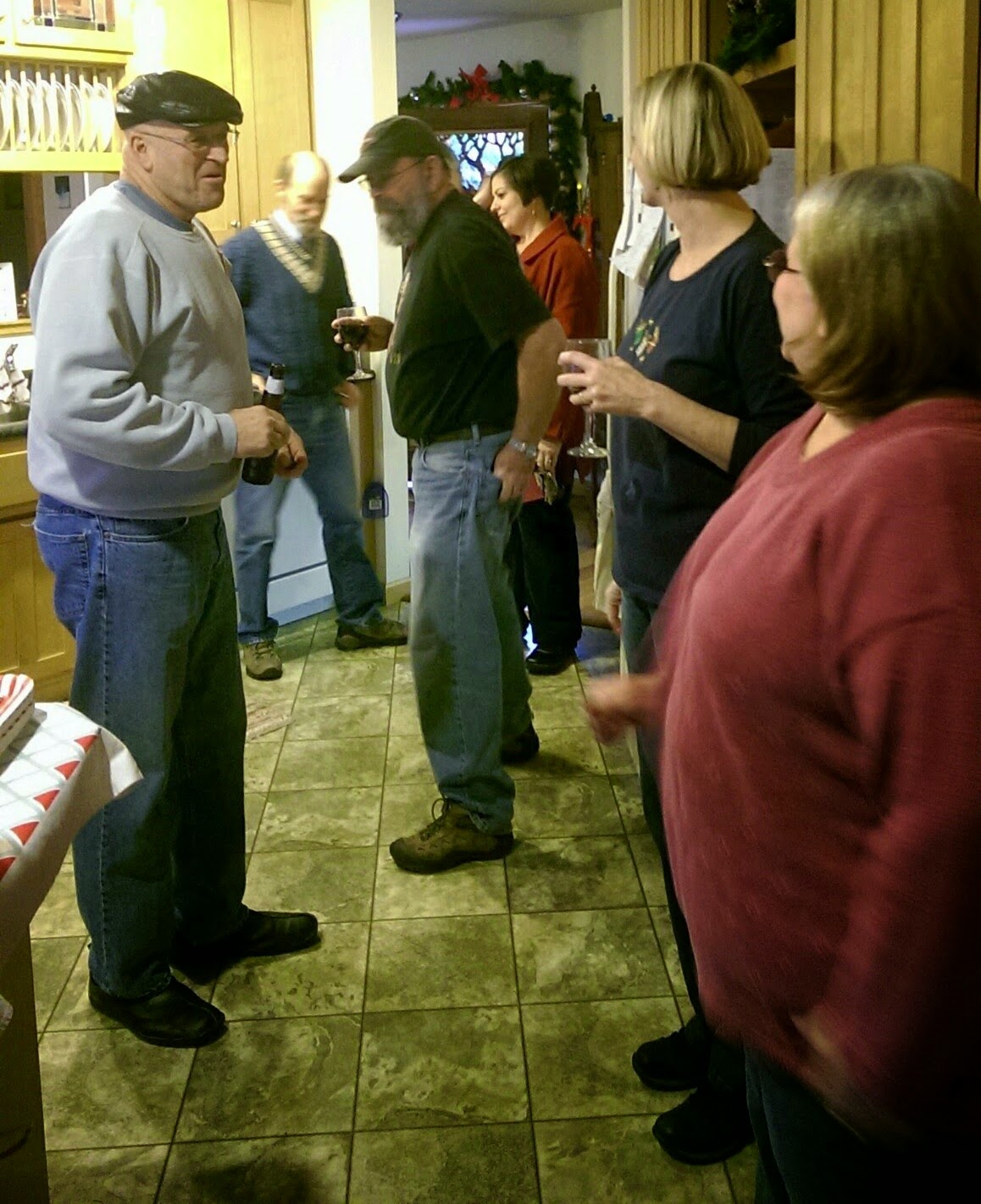 My sister did an excellent job of disguising their garage and making it festive:

I clicked a few selfies: 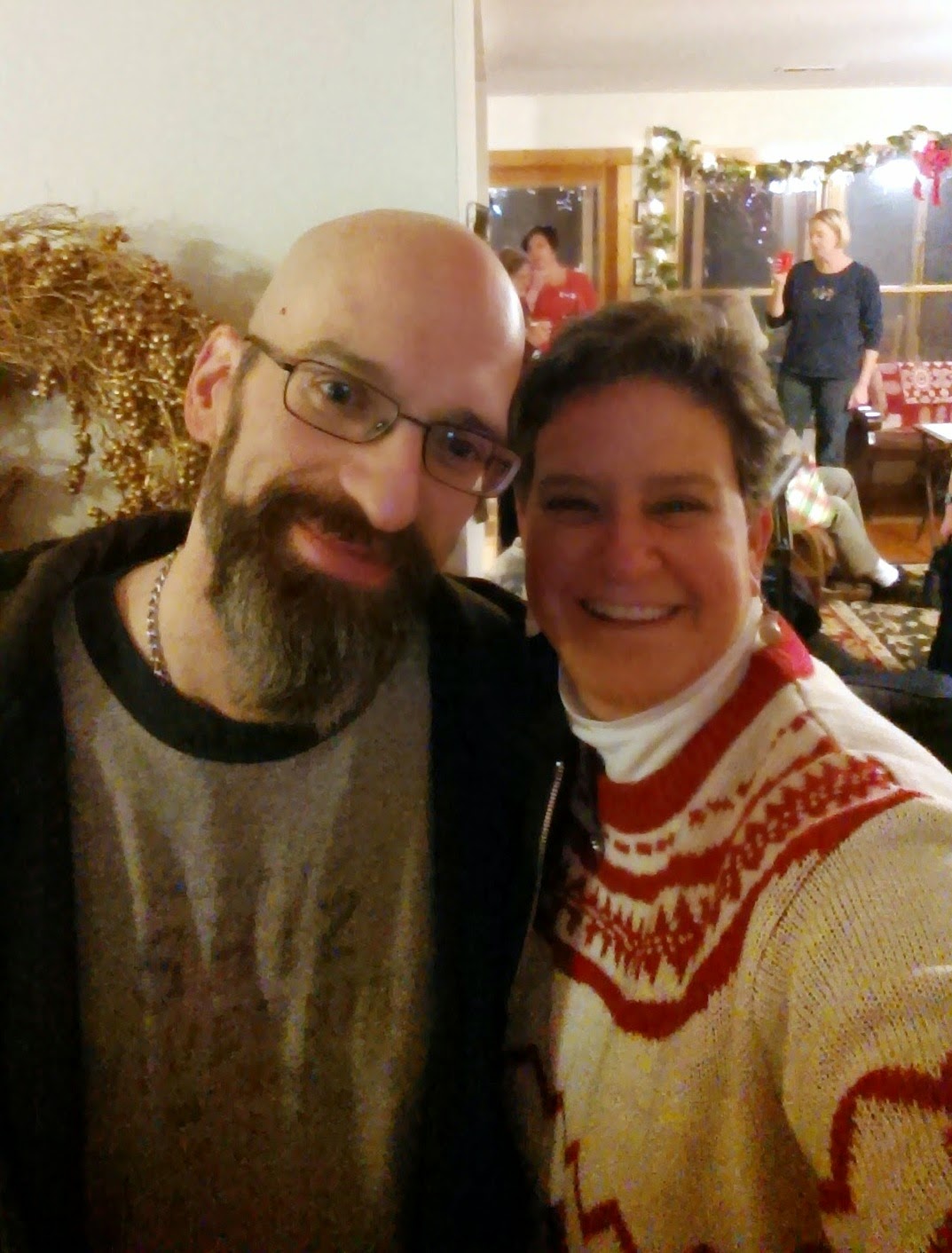 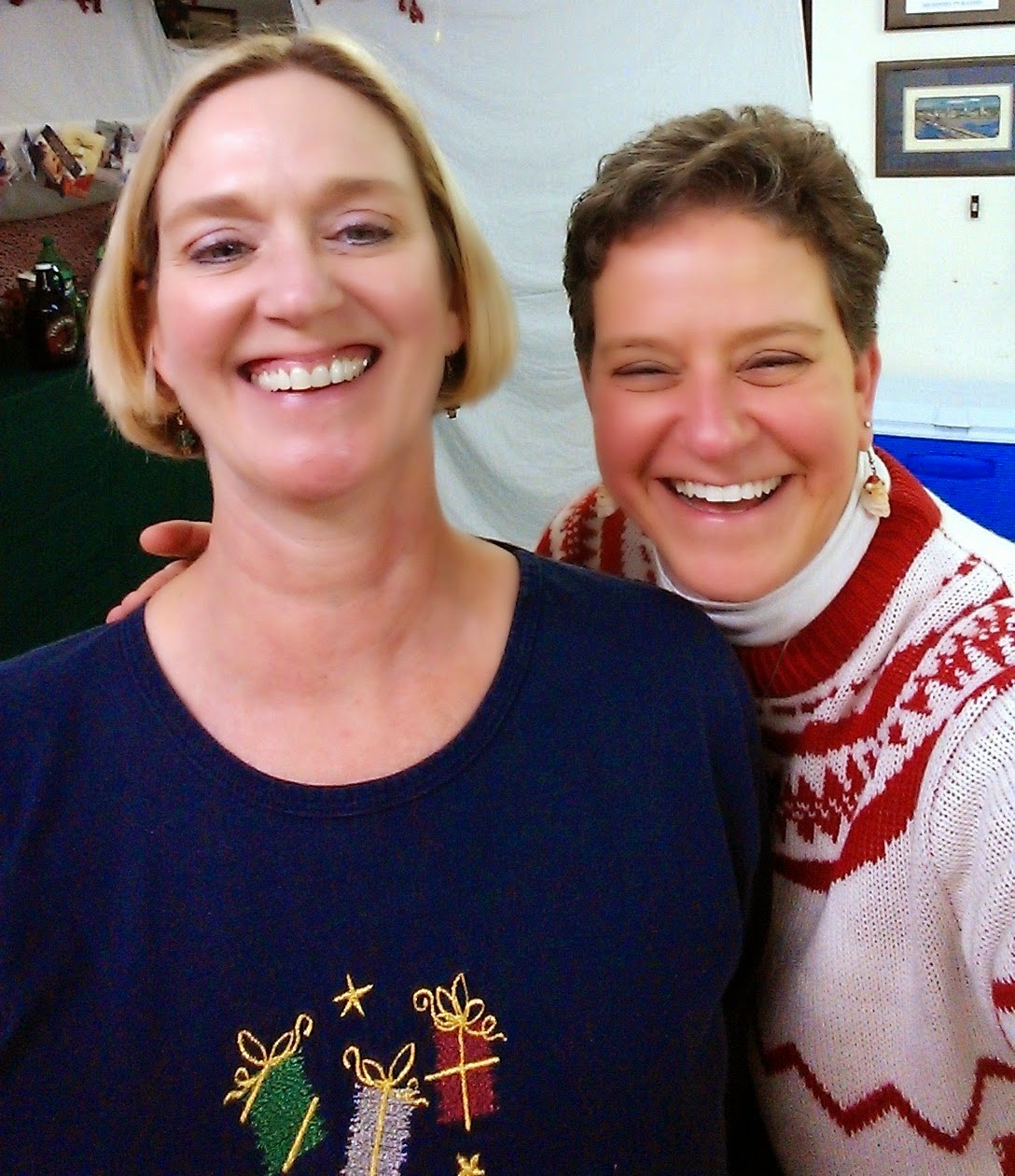 One of my sisters
Laika got into the Christmas Spirit, too: 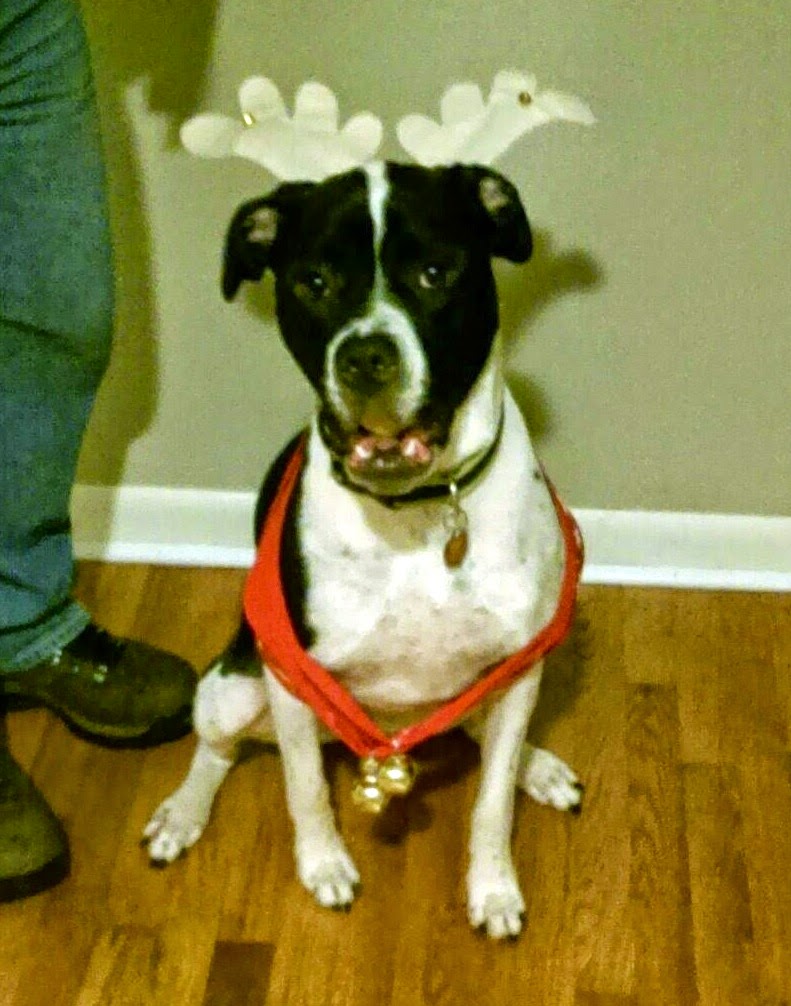 On "Christmas Adam", CH & I attended a party that a friend & her husband had at a local beer joint called The Casual Pint. More good company & some wonderful beverages. We tried a grapefruit beer that was exceptional...and I don't like grapefruit.
I spent Monday & Tuesday baking and making candy. And I decided that next year I'm only doing a couple of different things. When I asked the boys what they wanted me to make next year, they each said the one thing that I swore I'd never make again: chocolate covered cherries. 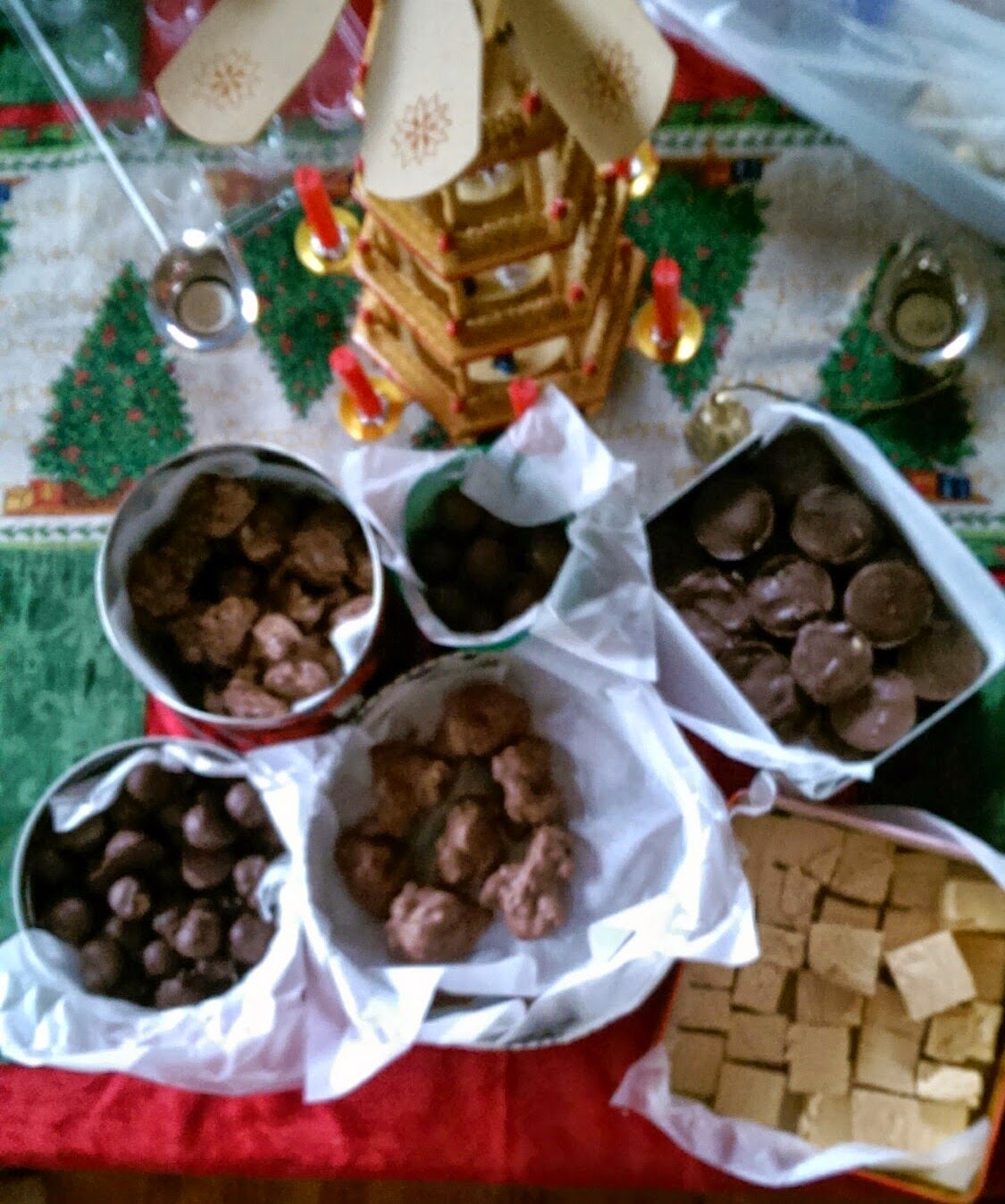 I played my flute for the Children's Mass on Christmas Eve, along with another young lady who also plays in the Community Band, and another lady who plays the oboe. We didn't do too badly, especially for not having practiced together!
We had Christmas Eve Dinner after Mass. Daddy came up and joined us.

I went back to Mass at Midnight with CH, MS, YS, Daddy, and a couple of my brothers & one of my sisters. There were some sad moments, but it wasn't nearly as difficult as I thought it was going to be. Midnight Mass was such a huge deal when I was growing up since Mama was the organist and choir director. When I took Daddy home, I offered to stay with him, but he said he was fine and told me to go home.
One of the advantages of having adult children: They wanted to open their presents at 2:00 a.m. so they could sleep later. So we did. 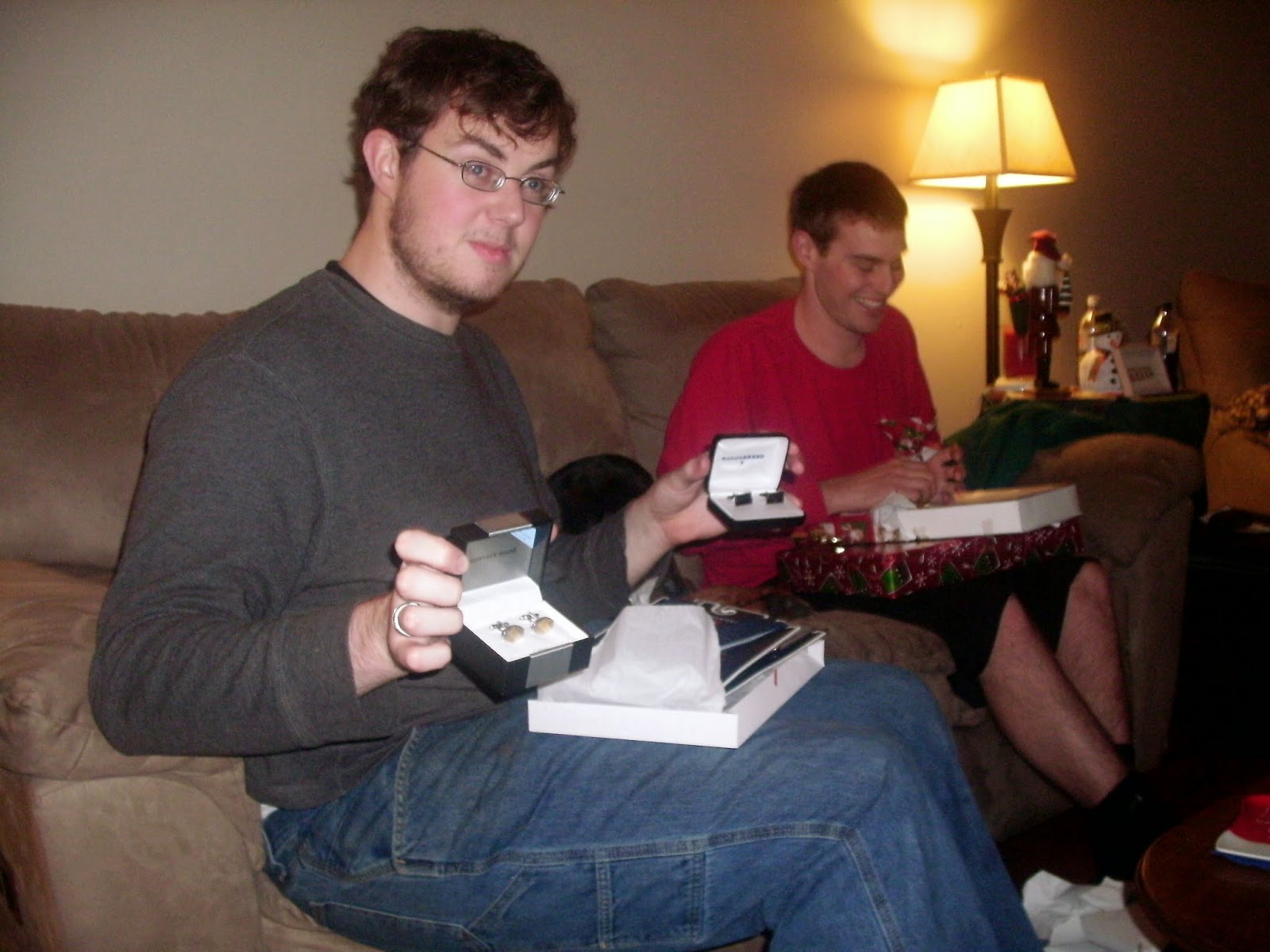 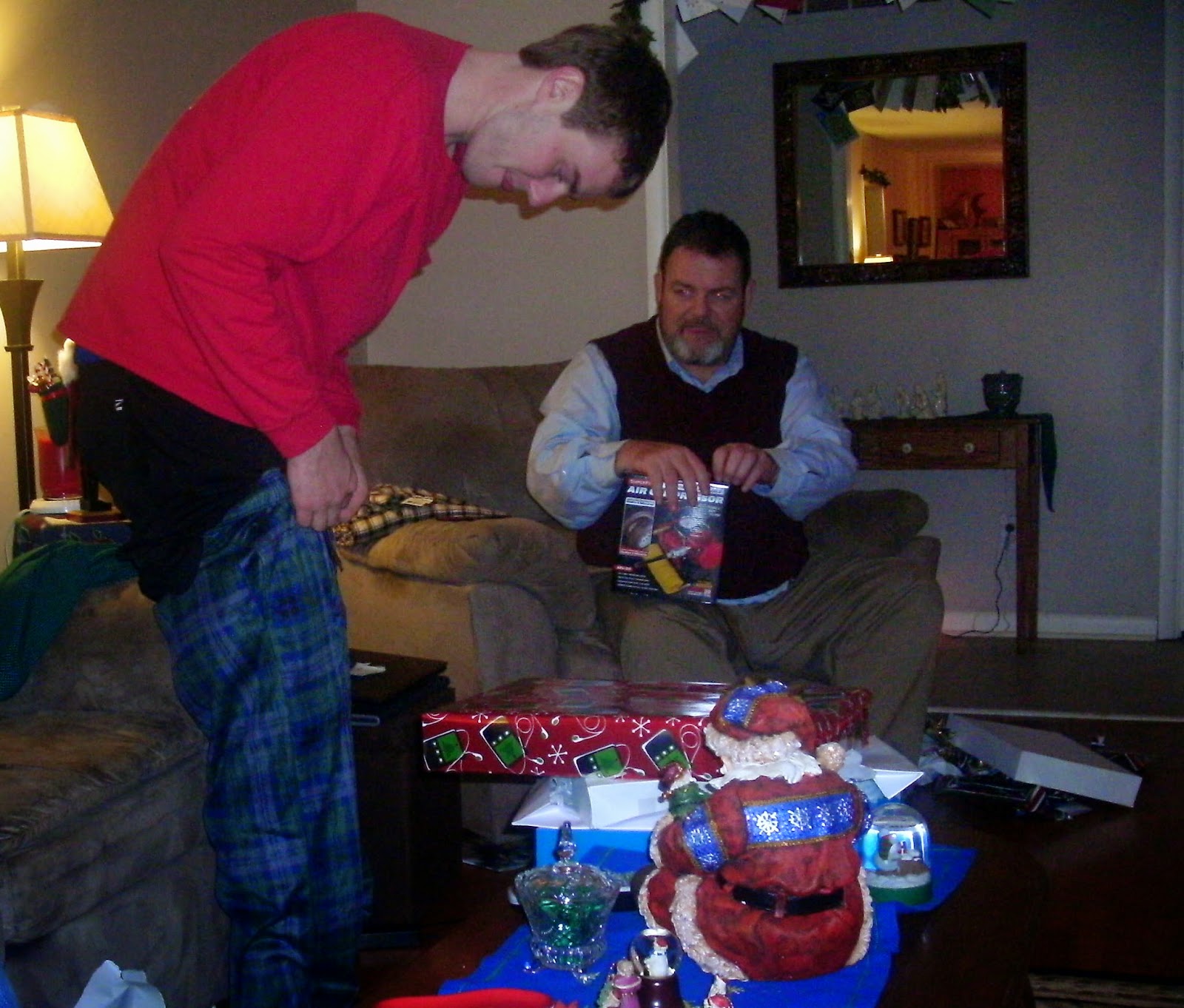 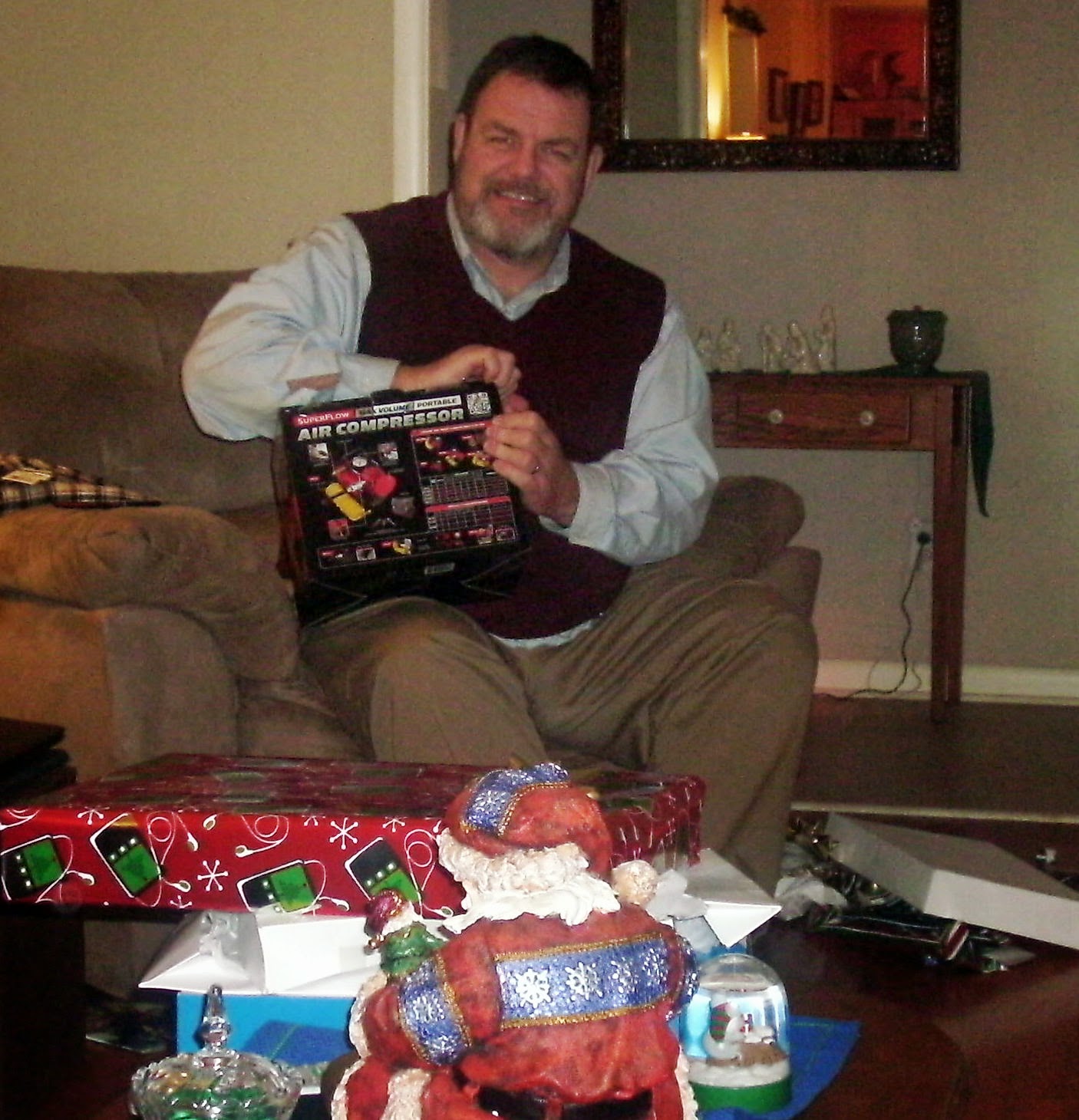 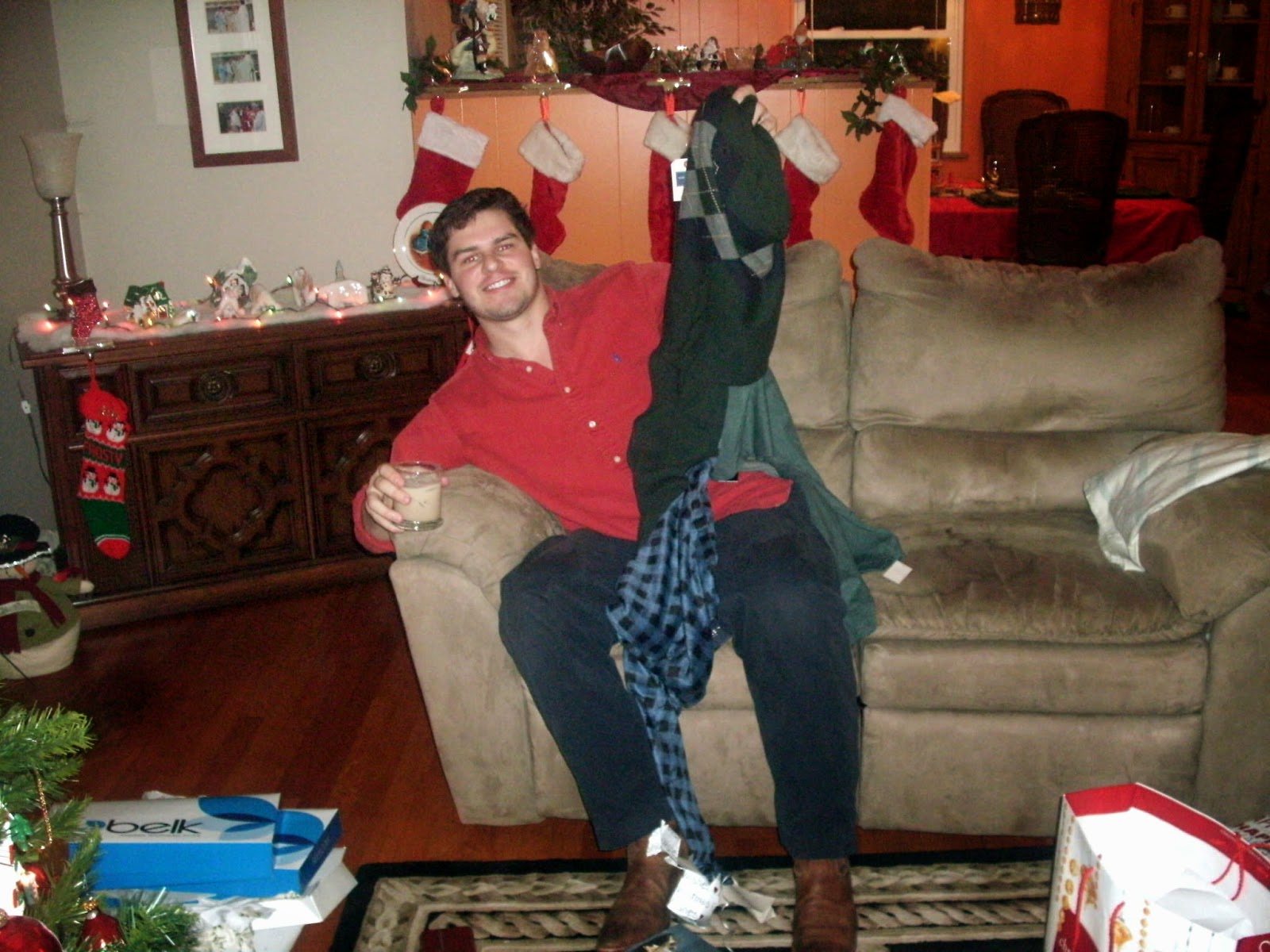 I think my grand-dog was just tuckered out: 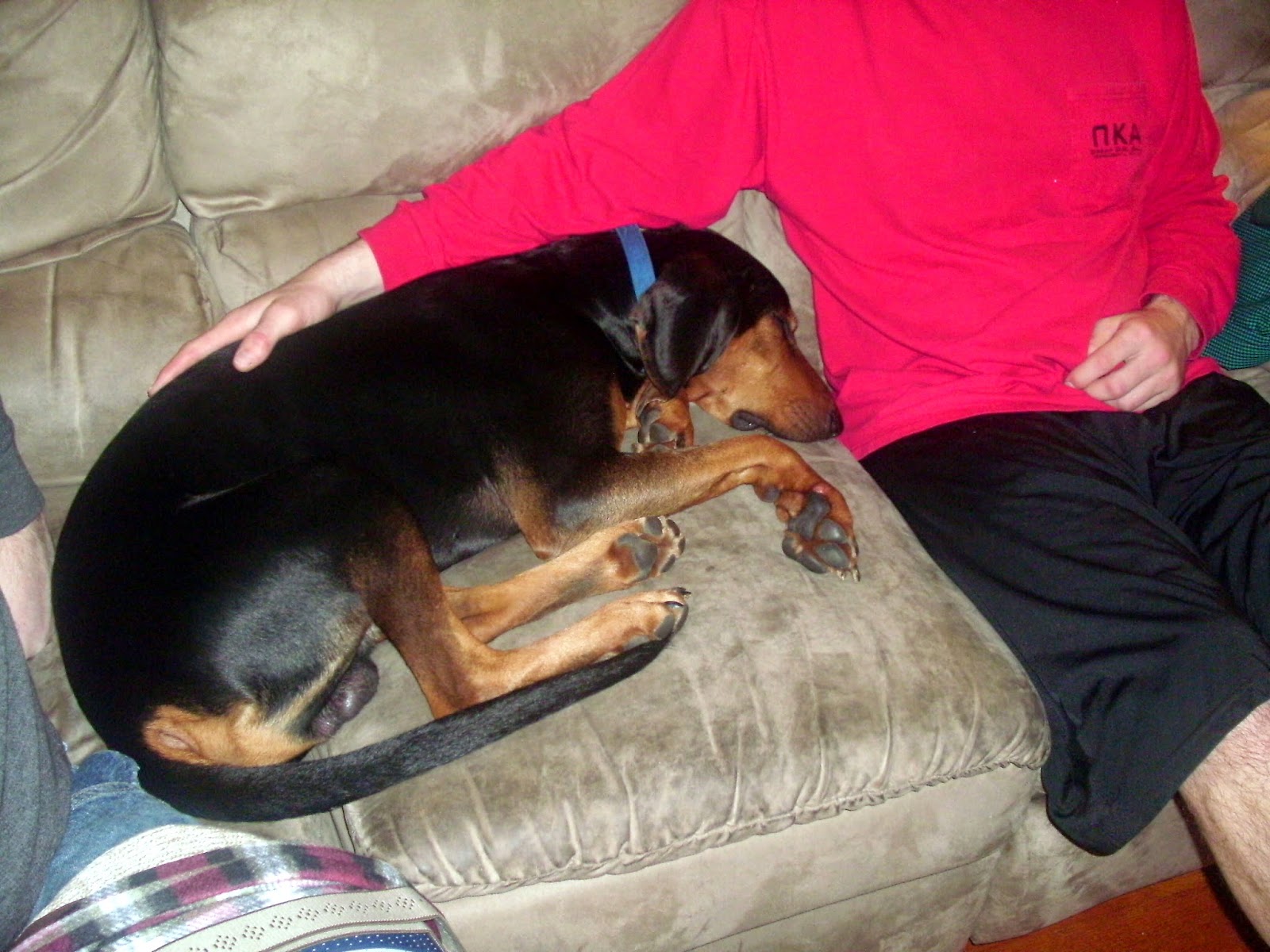 Daddy came back up to the house for Christmas brunch: 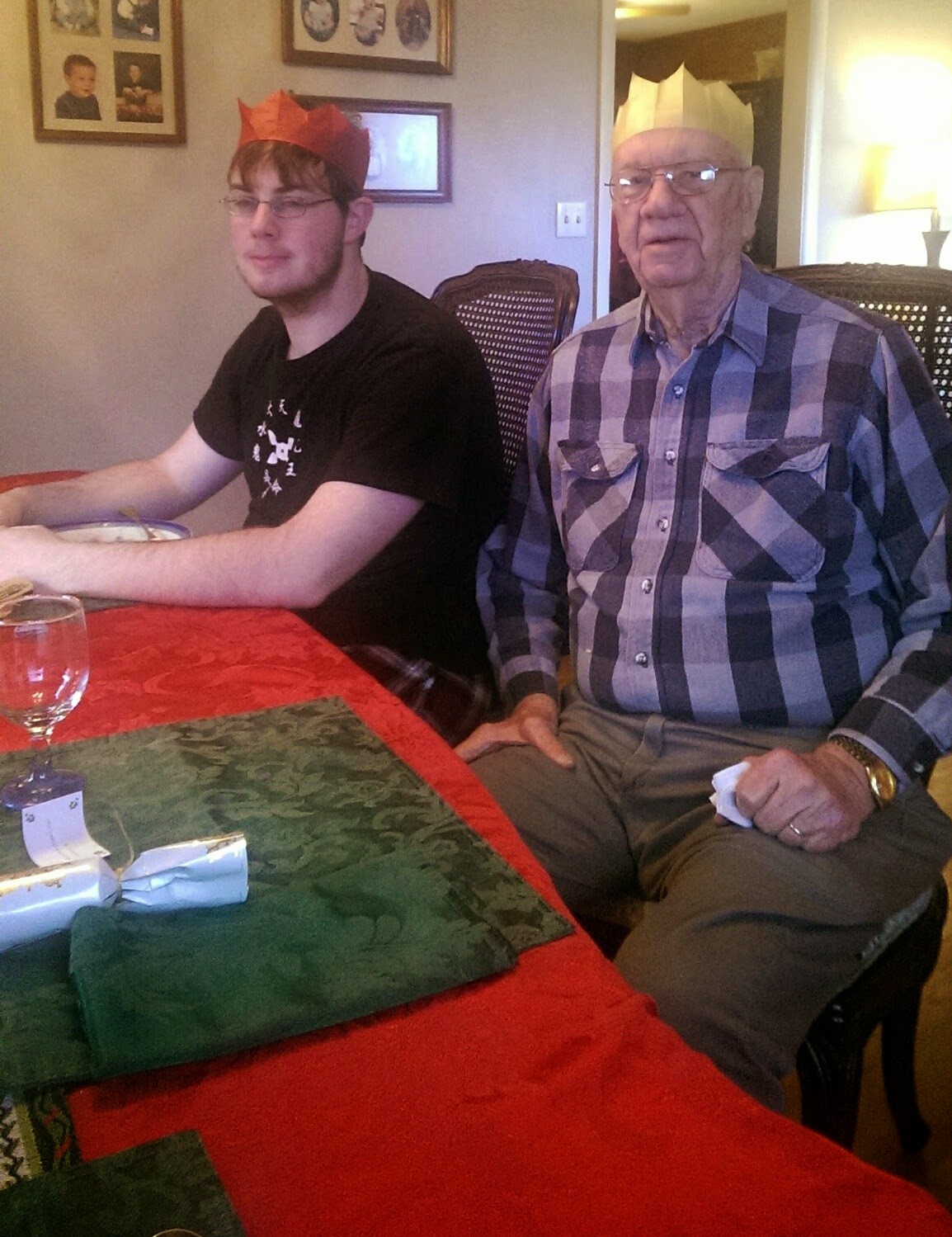 Daddy & I visited Mama's grave. My eldest sister had a wreath delivered, and it was just beautiful.

As you can imagine, this was a tough time of year. We all got through it, and I thought Daddy did exceptionally well...at least to our faces he did. There were times when I had to make myself do our traditions, but once I got started, it wasn't so hard. I know Mama would have wanted it that way. I loved having all 3 of the boys home; that was all I really wanted for Christmas!