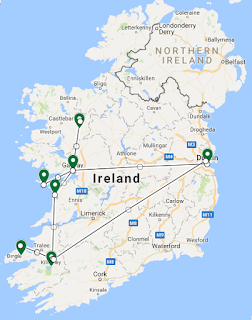 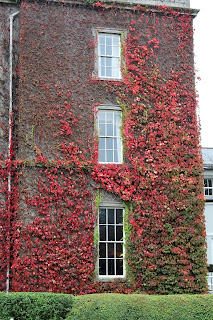 The train ride to Dublin was pretty uneventful. I sat next to a lady who said she was from Dingle. She was so pleasant.
We got back to Dublin, found the queue for a taxi and went to our hotel for the night. I watched the meter to see how much it was going to be, and right as we pulled up to the curb, he changed it so it was 10 euros, so he gave himself a bit of a tip. That was how much I was going to give him with a tip, so he didn't get any extra, especially after he pulled that stunt.
We were scheduled to go an "Irish House Party" that night, but we wanted to get into see the Book of Kells since we didn't see it before we left that Sunday.
When we got to Trinity College (where the Book of Kells is housed), there was a wedding just ending:

The Book of Kells is an "illuminated Bible" which was created by Monks in the 6th to 8th century.   Almost all of the pages contain illustrations, some are so intricate and delicate the details can't be seen by the naked eye. There were a couple of Book of Kells on a table along with a couple of other manuscripts. A lady who was in front of me said that she was there earlier that day but had to come back. She said that, at the end of the day, the books are locked up in a different place each night, and only the person who locks it up knows where it is. In theory, that's a good idea, but that morning they couldn't find it. (oops) She also said they (her tour group) were told that a different page is opened each day, which keeps one page from being worn more than the others. Unfortunately, photography was not permitted, but you can see some examples here.
The tour ended in the Old Library, where you could take pictures. It reminded us of Hogwarts...it was amazing! 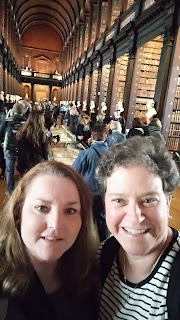 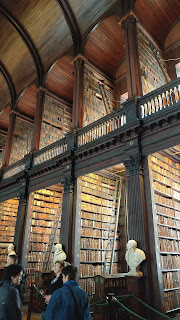 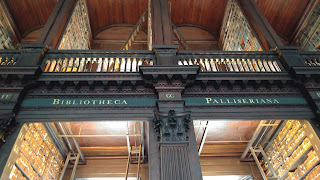 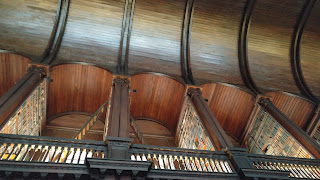 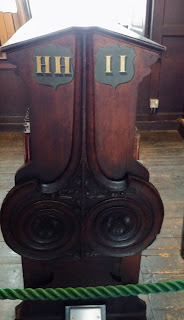 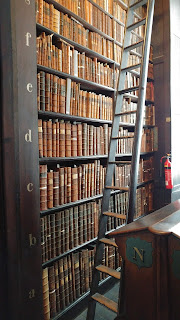 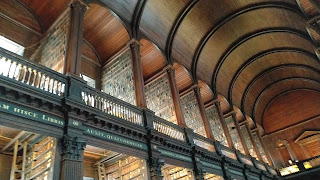 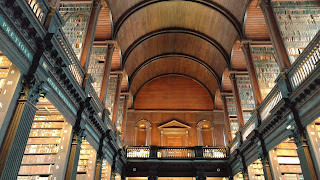 There were sooooo many books! The top floor walls look like paintings, but they are all books.  This is called the "Long Room": it is 65 metres in length (or, a little over 70 yards) and contains over 200,000 books. It was built between 1712 and 1732...before the U.S. even became a country. To learn more, click here.
We talked about wanting to go by Whelan's (the bar in PS I Love You), but M didn't think we would have time for the House Party & go by the bar. In hindsight, we had such a fun driver that night that I bet if we had asked him he would have taken us. Next time, for sure!
The Irish House Party was a BLAST. We were seated right next to the stage, and the band playing was very interactive. We were able to speak with them after; they were extremely nice.  Here's just a taste of what fun we had that night:
James, the flutist, let me hold his flute & get a really good look at it. It has such a beautiful tone to it.
The guitar player had a wonderful sense of humor (of course he did...he's Irish!).
The food was great, the drink delicious, and the company fantastic! As we were going back to the hotel, I happened to look up just in time to see the name of the street we were on. I said the name of the street and asked the driver if that wasn't where the Sisters of Mercy Founder's House is. He confirmed that it is, and he slowed down as we went by it. I thought he was going to stop so I could jump out and take a picture, but he didn't & I was on the wrong side of the van to get one.  Next time, for sure!
The next morning we got up and walked down the street to catch the bus to the airport. We were there in plenty of time to leisurely check in our bags, get something to eat, and look around the shops a bit before we went through security. Here's the thing I really liked: we went through customs before we left Dublin. It made it really nice when we got to Boston because we didn't have to get off the plane and stand in line; we just found our terminal to Nashville and hung out a bit. I made it through security and customs without a hitch. I brought back some honey for CH, so when the customs officer asked if I had any food in my checked bag, I told her about it. When I got home, I had a nice little notification in my bag that it had been gone through by customs. No biggie...the honey was still there. In fact, if the notification hadn't been in there I would have never known.
It was such a great trip, it just wasn't long enough. The people were so incredibly nice; even the men who seemed so stoic...once you said something to them they started talking.
We saw so much in that week, but as I looked up the places on the internet where we went, I realized how much we missed. I think the solution would be to go and live there for at least a year.
Some last looks at Dublin: 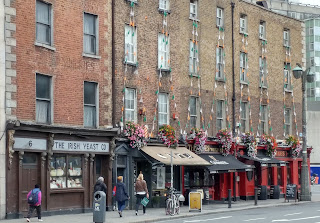 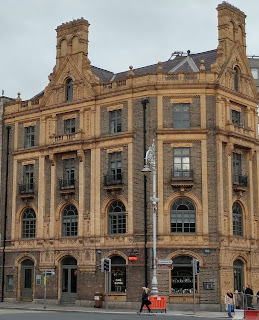 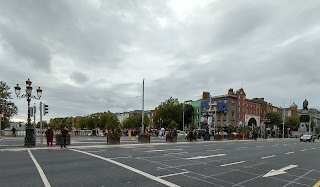 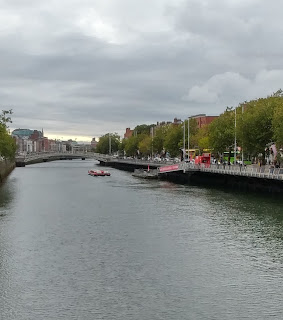 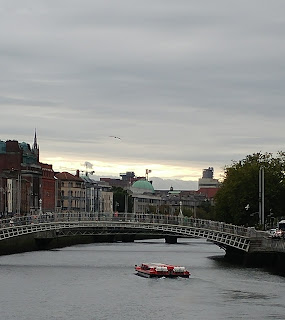 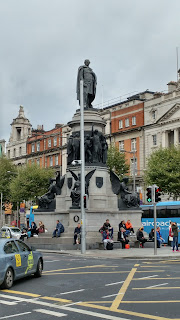 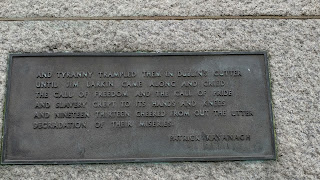