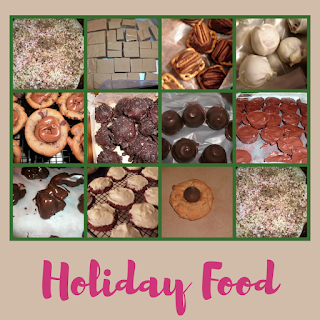 I can't let the holidays close out without talking about holiday food! At my house, we have traditional food that has to be made every year. What is a Christmas Eve Dinner without caramelized potatoes? Here's a run-down of the Cooper Holiday Food. (Get ready for a LOT of links!)

If you've been around here before, you'll know that I used to make quite a bit of cookies & candy around the holidays. (See picture above.)  I've really toned down the volume. I only made 1 kind of cookie: the boys call them "air cookies" but they're really "crinkle cookies".  They are super easy and only have 4 ingredients: spice cake mix, 2 eggs, 8 oz. cool whip, and powdered sugar. Just mix the first 3 ingredients and put them in the freezer for about an hour. Get a cookie scoop full of dough, roll it in powdered sugar, and place it on a cookie sheet lined with parchment paper. I use my Pampered Chef pizza stone because cookies are amazing when baked on them! Bake in a 350-degree oven for 8 to 12 minutes, depending on how big your cookies are. You can tell when they are done because they won't look "wet". Make sure you take them off of the pan as soon as they are out of the oven and transfer them to a cooling rack.

I made 3 batches (or was it 4?) of eggnog bread and tried making gluten-free eggnog bread. Everyone declared it a success! These little breads are perfect to give away to neighbors or friends as gifts. 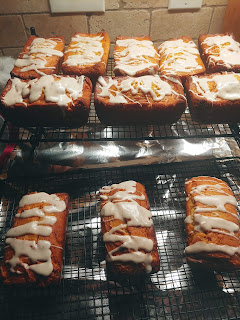 The GF loaves are on the bottom. I think they actually look better than the regular. They were denser and had a very good taste. All I did to make them GF was use King Arthur Gluten-Free Measure for Measure Flour and make sure all of the other ingredients were GF.
No Christmas is complete around the house without a couple of batches of Texas Millionaires. My next-door neighbor always brings a bag of pecans to make sure they get a batch. 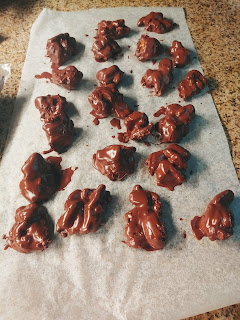 I also made chocolate covered cherries. They aren't the easiest things to make, by any means. It's not that they're difficult, they'll just try your patience! It requires painting the chocolate over the mold so the "juice" doesn't seep through. Even though they're a bear to make, I can't eat a Queen Anne's chocolate-covered cherry anymore!
And peanut butter fudge...Oh My! My favorite way to eat them is out of the pot while it's still warm. I had been exceptionally good with not eating sugar until then. It was totally worth it! The only other thing I made was peanut butter cups. YS made most of those...he took the easy way out; they're a lot easier to make than chocolate-covered cherries.
Christmas Eve Dinner consisted of ham, broccoli casserole, rolls, cranberry sauce (it's more of a chutney...YS makes it and it is delish!), and caramelized potatoes. To keep with the Danish tradition with a Southern USA twist to it, I make pistachio pudding (because CH doesn't like rice pudding) and put a pecan in 1 of the dishes (instead of the traditional almond). Whoever gets the dish with the pecan wins a prize. 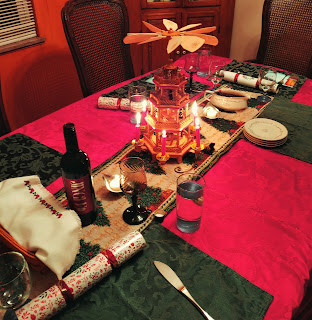 The Jingle wine is from Prairie Berry Winery. We visited there a few years ago when we went to South Dakota and Colorado on vacation. It's perfect for the holidays!
One thing I haven't done the past couple of years is baked a cake for dessert. The last time I did I came home from our camping trip to a complete cake that hadn't been touched. I wised up this year and made a Danish Apple Cake. I'm not sure if it's really Danish, but my MIL gave me the recipe a long time ago, and I believe her mother gave her the recipe. At least, the original was written in Danish so I'm calling it a Danish Apple Cake. Before I put the glaze on it, I cut it in half and put one half in the freezer. I used the same recipe for the glaze as I did for the eggnog bread, which means there is rum in it. BUT...instead of using spiced rum, I used Satsuma Rum from Bayou Rum. It blended perfectly! 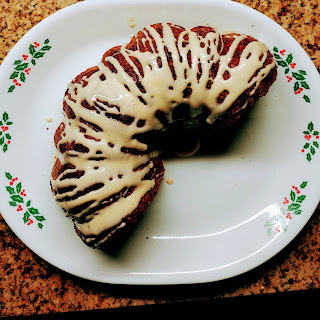 Christmas Day Brunch is always sausage links with a maple syrup/cinnamon combination, eggs, and Holiday Eggnog French Toast. (This was a recipe from McCormick but it's no longer on their website.) This is the first year I baked the toast in a 9x13 pan instead of a large aluminum foil pan. It actually turned out much better. 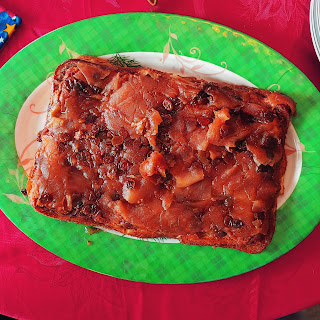 For the eggs this year, I saw a YouTube video on making crustless quiche in the air fryer. I didn't have the ramekins, so I ordered some on Amazon and they made it to the house quickly. They were incredibly easy to make. The only thing is that each one took about 10 minutes to make and there were 5 people here. The air fryer is only big enough to make one at a time, so I made one, put it in the oven on "warm", and kept going until all 5 were made. They were delicious. Next year, I will make them in the oven instead. These would be really good to make for a brunch for 2. Ham, bacon, or sausage would also be excellent in there, as long as it didn't make them greasy. 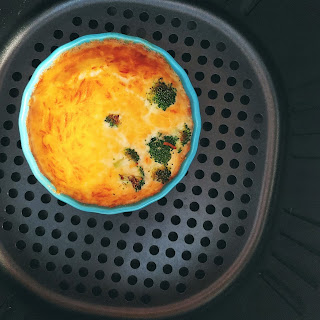 If you're interested, the video is below. Just a heads up: I tried the grilled cheese & CH & I decided it was easier to just use the panini maker.
That's it for the Holiday Food wrap-up for 2020. What was on your plate this year?