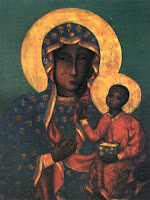 Last week, during our Parish Mission, Father Simon spoke quite a bit about the "Black Madonna of Czestochowa".  She also called the "Queen of Poland".  Get ready to hear an amazing story.

Originally it was said that this icon was painted by St. Luke, who lived the same time as the Virgin Mary.  It is said to have been painted on the top of a table that was built by no other than Jesus Himself.  While St. Luke was painting the picture, Mary told him of Jesus' life, which is how St. Luke wrote his gospel.
However, the Pauline Fathers' website indicates that the icon was "probably from 9th century Greek or Italian origins with 13th century overpaintings."

The icon left Jerusalem and stayed in Constantinople at the urgency of St. Helena, who was Constantine's mother.  400 years later, it was used as a dowry for one of the princesses who married into the Russian Opolsey Family.  That family married into Polish royalty, which explains how the icon ended up in Poland.  Prince Ladislaus, ruler of Poland, decided to move the icon after the Tartans attacked the castle, and an arrow was shot through a window, slashing the icon on Our Lady's throat.  During the move to Opole for protection, Ladislaus stopped in Czestochowa for the night, and placed the icon in a church for safe-keeping.  The next morning, the horses were unable to pull the wagon.  After several unsuccessful attempts, the prince knelt in front of the icon and asked what he was suppose to do.  His answer came in the form of a dream:  He was instructed to leave the icon in Czestochowa and to have it enshrined on Jasna Gora (the highest place in the town).  The prince brought the Pauline Fathers from Hungary to Poland to guard over the icon.

Unfortunately, the icon was not completely safe.  During a raid in which many monks (who were trying to keep the icon safe) were killed,  religious artifacts were taken out of the church and were thrown into the vandals' cart.  They were 1 1/2 miles from the church when the horses stopped and could not be budged.  The icon was thrown on the ground, broken into 3 pieces, and slashed.  This is how the marks on Our Lady's face happened.  The vandal was about to do further damage, when he was struck by lightening and killed.  The other vandals ran away after seeing what happened.  The priests, upon seeing their beloved icon, knelt and prayed.  A spring suddenly appeared, and the priests used that water to clean the icon as best they could.  Saint Barbara's Church was built on that site to accommodate pilgrims who visited and were granted physical and spiritual healing.  Today, pilgrims to the shrine at Jasna Gora will see crutches and braces along the wall, visual signs of miracles that are attributed to the Black Madonna of Czestochowa.  Pope John Paul II (who was Polish) credits his miraculous healing from the assassination attempt to the Black Madonna; he left the stole he was wearing when he got shot on the altar.

Tradition says that Our Lady is black because of the soot of the votive candles that have been placed around the icon.  The Pauline Fathers' site indicates that she is dark because of the paints that were used.  In the shrine, the icon is protected from fire and bullets through fire-proof and bullet-proof glass.

When restoring the icon, the slashes on Our Lady's face were left alone, as a reminder of the desecration that the image suffered.  When I look at those slashes, I think about the hurt that Mary has gone through and is still going through:  Seeing her son crucified, as well as seeing nations turn against her son.  It's a reminder to me that my disappointments and sufferings are nothing compared to what she went through.  It's also a reminder that she understands and will intercede on my behalf.

Below is a clip of the song "Czarna Madonna" (Black Madonna).  The song starts in Polish; the English verses can be found around 1:50.

There's a corner of a country
Which the pilgrims gladly seek
Where in glory hangs the portrait
Of a Queen slashed on the cheek.
She is grieving, She is caring,
She invites us, everyone:
"I'm your Mother, be my daughter,
be my son."

Email ThisBlogThis!Share to TwitterShare to FacebookShare to Pinterest
Labels: Catholic