Meet Me on Monday 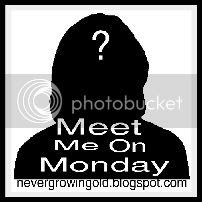 Oh, how I love that Java comes through for me every Sunday night!  It's a good way to slide into the week!  This week's questions:

1.  If you had to eat only one food for the rest of your life, what would it be?
Okay, I'm stealing this from someone else's post that I read last week:  Pizza, because you can change the toppings out!
Edit note:  I got a comment letting me know who I stole my answer from!  The Beverly Buzz  Thanks for not being perturbed at me!  (You weren't were you?)  :)

2.  Do you write your blog posts in advance or the day you post them?
I usually write them the night before, but every now and then I get in a groove and will write posts a few days ahead.  Which brings me to a question:  Does anybody else have a problem with scheduling a post, only to have it not post at the designated time?  There are days when I want the post to be published at 5:00 a.m., but it didn't post and the edit post says"draft" instead of "scheduled".  Does anyone have a clue why?


3.  Have you ever ridden in an ambulance?
When I was 3 months pregnant with OS, I was in a car accident.  A car hesitated at a stop sign and pulled out in front of me.  I had no where to go, so I hit him.  When the ambulance got there, I mentioned I was pregnant, and that my chest was hurting (from where the seatbelt caught me).  They hooked me up to a heart monitor and took me to the ER.  The counselor from school happened to drive by and rode with me to the hospital (CH was away at an Army School so I was on my own).  On the way to the ER, the heart monitor started beeping wildly.  The counselor looked at the driver and asked if I was okay, to which he responded, "she's fine...they're just stepping on the lead."  When the monitor was going crazy, my initial thought was, "So this is what it feels like to die," followed by "You're not dying, you idiot!"  My car was totaled, and the other driver told his insurance that I had crossed the center line and ran into him.  It ended well; apparently he had been caught in some lies before, and it was pretty obvious what had happened.

4.  What is your favorite candle scent?
During the fall, I really like the pumpkin spice or apple cinnamon.  I have Bath & Body Works Midnight Pomegranate in my candle warmer right now.

5.  Coffee or tea?
Coffee.  With lots of the flavored stuff in it.  Over the winter when I didn't feel well, I did enjoy drinking hot tea with honey in it.

Join in and get to know your blogging friends better!

Email ThisBlogThis!Share to TwitterShare to FacebookShare to Pinterest
Labels: Meet Me on Monday