Yesterday was much calmer than Wednesday.  In Greene County, which is about 1 1/2 hours from me, there were some deaths from the storm.  I have a couple of very good friends who live there, so I checked with them to make sure they were okay.  One friend said that several of his kids' schoolmates lost their houses, and one lost her father.  The other friend said that she and her family were okay, but there were many who weren't and needed prayers.

I texted OS a couple of times before I got an answer:  He was okay and he didn't think it was bad at his university.  I think he's just used to SC storms and didn't realize just how bad it was.  One of my sisters lives near the university.  She said that there was some damage to her house, but they were fine.  It's a good thing tax season is over; her husband has time to take care of things now.

MS' car did not have a branch through it: his broken back window was the courtesy of hail.  I went up and put plastic over it; he drove it home yesterday evening and vacuumed the glass out.  I couldn't believe how much glass is actually in a back window.  It completely shattered. 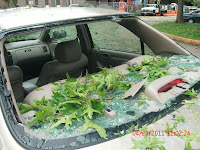 There were several cars in the same shape when I pulled into where he had parked his car.  And, all of the kids who came by and talked to me told me their cars had damage, too.    His poor little car has dents all over it, too.  It looked pitiful.  When I went to Lowes to get the plastic and tape, I talked to 4 people who said they had windows in their house broken.  So, it could've been much worse.  God was really protecting us last night.
Good news:  the baby bunnies appeared to have made it through the storms just fine.  I checked on them yesterday morning and saw the cover of the burrow moving.  Mama was close by, keeping an eye on me.  Pepper's been doing a good job of listening to me when I say, "Uuuuuh" when she starts heading toward the burrow; Ally is still clueless.  Here's a picture of Mama Bunny:  the burrow is just to the right of the tree on the left. 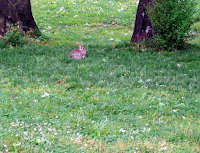 Another weekend is upon us.  Gosh, I love Fridays!