I'm trying hard to get back into the swing of things...including keeping my blog up to date!  That includes participating in Weekend Wrap-up; hosted by Stephani @ A Defined Life.  Feel free to join in!
Friday evening was Open House at my new school, so we worked from 12:00-7:00.  Things are feeling a little more comfortable there.  I completely forgot to take a picture of the school as I was leaving.
I got home & OS & GF (girlfriend) were there.  Luckily I didn't have to entertain there, because I was exhausted!
Saturday was busy for us. It started with some "Danish Pancakes" (which are really just crepes with peanut butter, nutella, and syrup): 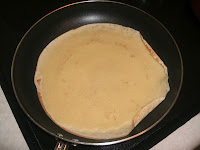 I spent that morning doing some last minute shopping for OS, who moved out on Saturday.

This picture is courtesy of CH; I wasn't home when he left because I was doing my civic duty at WalMart, volunteering for "Stuff the Bus".  Stuff the Bus happens during tax-free weekend; it was our job to hand out lists of school supplies to people entering the store so they could buy a few things on the list and bring it back to us.  The supplies are then divided up and delivered to the schools to help out those students who can't afford supplies.
Back to OS:  He starts his new "grownup" job today, and a new chapter in his life.  Grownup job, grownup responsibilities.  He's moving to a neighboring state and will help manufacture kayaks.  Hopefully he'll eventual do something with his degree, which is Marketing.  My hope is that he'll learn the company, and move up to put that degree to use!
That afternoon, YS escorted a young lady to a "Teenboard" Reception in the big city: 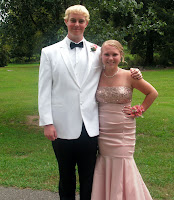 Teen Board is similar to an Old Southern Presentation Ball, but the students have to have completed 50 hours of volunteer work.  The young ladies wear white dresses; her "court" wears pastel.  Teen Board was started by a woman whose daughter was killed by a drunk driver, and, even though it is described as a kind of a "debutante" ball, it is more about the community services.  The lady over the Teen Board was quoted in the paper as saying that most of the students have over 100 hours.
With the house to ourselves, CH & I had a quick dinner at a local restaurant, then we went back to the house.  Guess this will be our life in a few short months!
Sunday, we went bed shopping.  Since OS is now officially out of the house, we can have a "guest bedroom".  We found a bed at the second place we looked; now we CH just has to go back and buy it.  Furniture shopping was followed by grocery shopping and laundry.
And that was the end to our weekend.  Busy, but nice.  Seeing OS moving his stuff out really didn't bother me as much as I thought it would.  He's landed a good job in an "up and coming" city that is very close to hiking, camping, snowboarding, and rafting/kayaking, so it's an incredibly good fit for him.  He found a house to rent (that came with roommates already intact) that is within walking distance to downtown, and within 15-20 minutes of work.  I'm so excited for him as he begins this new chapter!
Don't forget to visit A Defined Life and link up with your weekend wrap-up!
Email ThisBlogThis!Share to TwitterShare to FacebookShare to Pinterest