CH & I had our dry-run with our new trailer Saturday night.  He wanted to go someplace close to home for our first time.  So, we went to Cades Cove, which is in the Great Smoky Mountains National Park.  We left the 2 "old" dogs with YS, and took Laika with us.  I had never stayed in the campground before:  I've picnicked plenty of times in the picnic area, but never stayed overnight.  The campground is somewhat "primitive":  no water or electricity hook-ups, but there are bathrooms with flushing toilets.  There's also no internet or cell coverage. 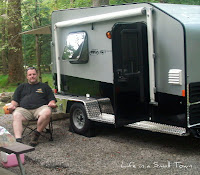 CH was suppose to transfer some money into YS' account so he could get some dinner, but didn't think about it until we were in the park.  So, after he set everything up, he drove back into town and went to a friend's house to use their internet.  While he was gone, Laika & I went for a long walk around the campground.  As soon as we got back to the site, I sat down and thought, "uh-oh.  I wonder if CH remembered to get the burgers out of the freezer before we left."  I knew he hadn't, and I sure hadn't remembered.  As soon as he got back, I asked him if he had gotten my message (sent telepathically, of course!).  He didn't think it was too funny that I had forgotten the hamburgers, so he handed me the keys and it was my turn to take a trek into town. 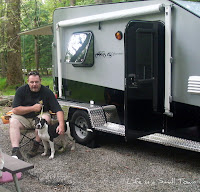 (CH & his "camping dog")
That evening, our friends (who live just before you get into the Park) rode in to have hamburgers with us.  It was nice to talk over burgers cooked over a charcoal grill (there's nothing like a Cove burger!), followed by talking over a campfire. 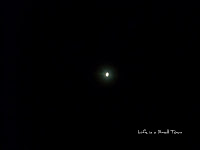 (The moon...it was really dark out there!)
Our first night went great.  We had the windows and the roof vent open, and had the fan going for part of the night.  I woke up cold at one point, so I snuggled up to CH for some warmth.  I was a little alarmed when I realized he wasn't snoring (he's a definite snorer!), and for a brief second thought about if I should try to wake him up (to make sure he was still breathing), or wait and take my chances in the morning.  He felt warm, and then he moved his leg, so I breathed a sigh of relief!  I pulled the comforter down after that, and things were nice and snuggly. 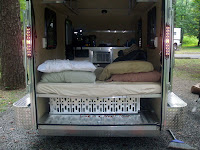 (We had the back closed during the night!) 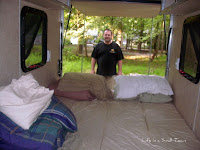 (Plenty of room for us to sleep)
After we woke up, CH cooked omelets.  I would've loved to have coffee, but somebody forgot to bring the pot to boil water.  He said that he had it, but he didn't want me to have coffee since I forgot the burgers.  (We're pretty mature like that!)  We broke down camp after that and came home.
Small Town High School played Rival High School on ESPN2 yesterday at 12:00.  It was a good game...until the last quarter.  STHS just ran out of steam and made costly mistakes.  We have a lot of players that play offense & defense, and some of those players also play on special teams; Rival HS has the luxury of not having to do that.  When YS came home, it said it was unreal how hot it was on the turf: one of the majorettes got sick on the field during their performance, and a couple of our cheerleaders passed out...one of Rival HS' cheerleaders passed out, too.  As far as August days go, it wasn't too hot or too humid of a day, but they don't usually play in the middle of the day.  The team looked good, so we're looking forward to an exciting year.
I definitely learned a good lesson over the weekend:  Make a list and check it twice!  We also realized that there were some things we didn't have that would be good to have (like better bug spray!), and some things that we would do a little differently.  Guess the dry run was a good idea.
Email ThisBlogThis!Share to TwitterShare to FacebookShare to Pinterest