What a beautiful weekend!  Did anybody see the meteor shower Friday night?  We tried to think of a place to watch it where it would be dark enough to get a good viewing, but I was very pessimistic about finding a camping spot on Memorial Day Weekend.  CH came through, and hooked us a spot at "Mile High Campground" close to Cherokee, NC.  The drive was just a little over 2 hours through the mountains, and the views were unbelievable! This is the view from our campsite: 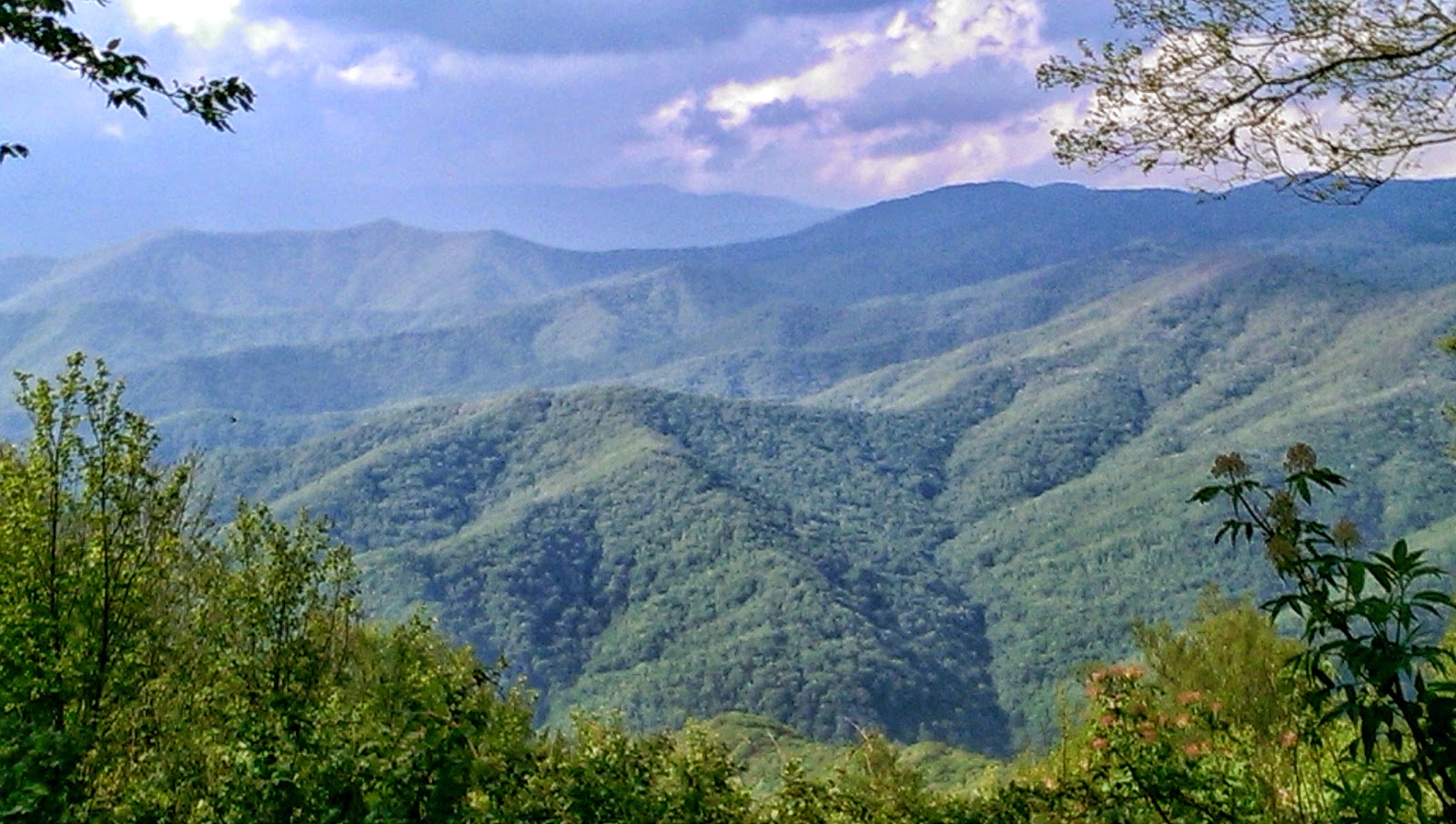 Not too shabby, huh?  It was pretty amazing to sit in our chairs overlooking these mountains, and thinking about all of the early settlers who had such a rough life.  I also thought about the Cherokee Indians who were driven from those mountains.

The campground is "primitive", meaning there's no electricity or water at the sites.  There are some flushable toilets, and there's even warm showers at the main bathhouse.  The water pressure wasn't great, but there was plenty of water to wash my hair.
Friday night, as soon as it got dark, we were able to see some meteors.  There were a couple that just seemed to go on forever.  We missed the height of the shower since we conked out around 9:30-10:00.  They were calling it a "storm" instead of a shower, but, unless it really got going around 1:30, it didn't live up to the hype.
Saturday morning, the family next to us in the group campground came over to let us know they had some visitors: 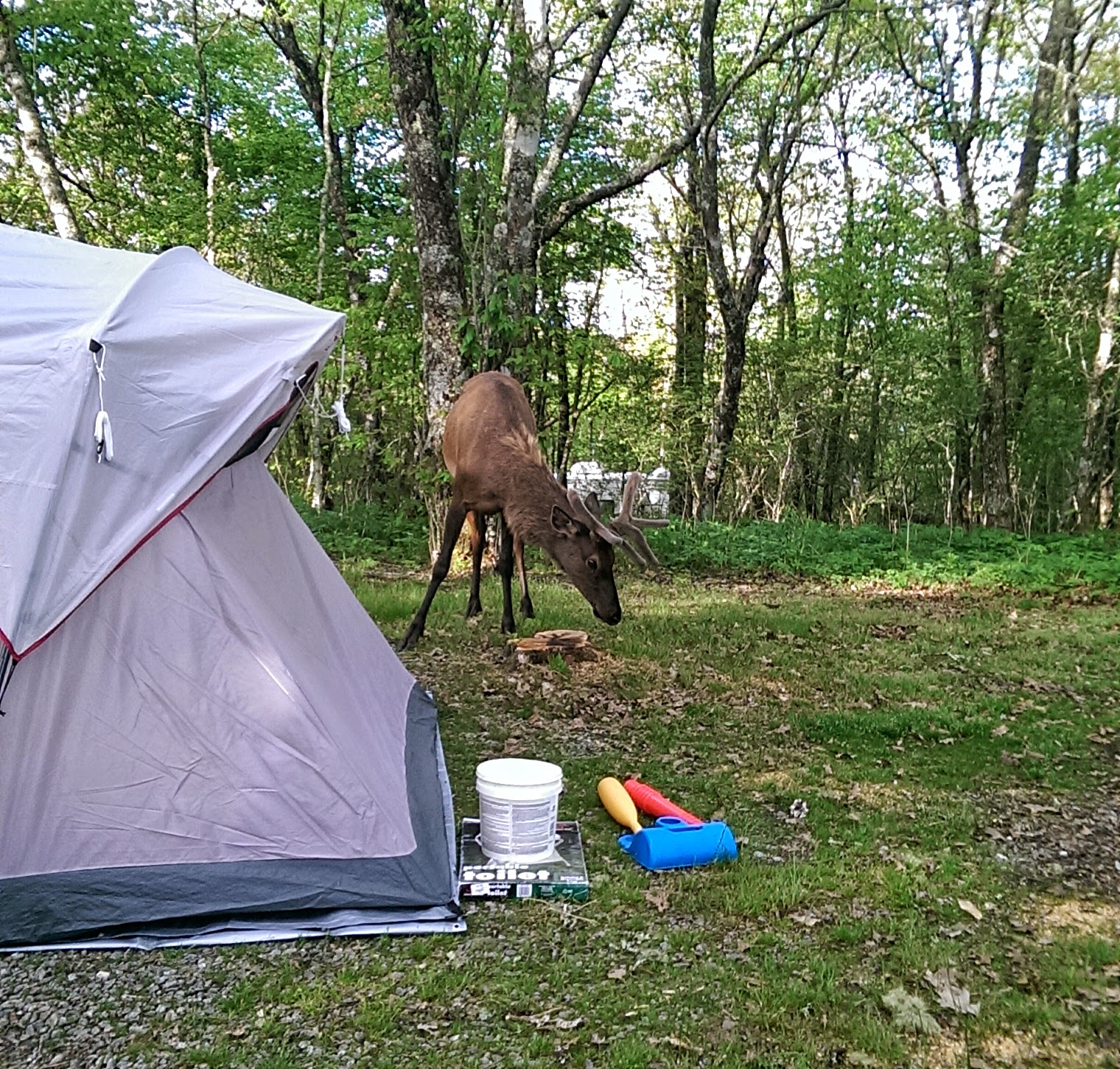 The elk are just beautiful, and much bigger than I expected.  I saw 5; CH said there were actually 7.  Later, while I was reading, a little chipmunk jumped onto a nearby log.  That was the first time I had seen a chipmunk in the wild.
I had to keep moving my chair to get in the sun since it was almost cold in the shade.  Not the brightest thing for me to do:  I ended up with a very sunburned face and upper legs.  I pulled a major no-no:  I didn't put on sunscreen.
There was a couple that had restored a 1973 AirStream.  Oh my, that thing was beautiful!  They said they live in it full time, and they take it to vintage camper shows.  It took them 3 months to get it livable, and 6 months to complete it.  I didn't take any pictures of the inside, but believe me when I say it's as nice as a really nice apartment! 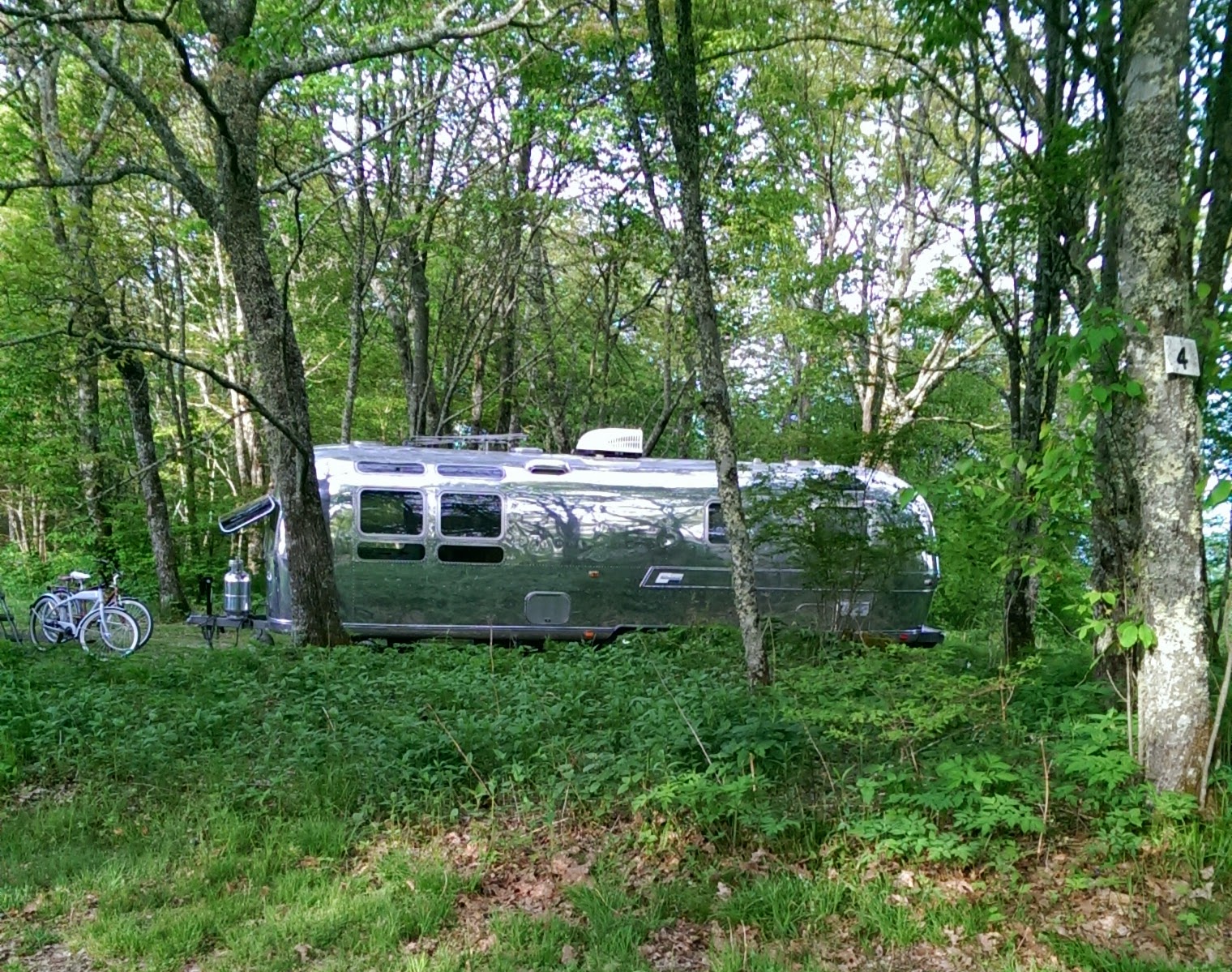 We did a lot of walking (Laika was with us), a lot of just sitting and being still, and I managed to finish the last half of "The Book Thief" (Markus Zusak).  Saturday evening, CH asked why we were leaving on Sunday; then I reminded him that he was the one to make the reservation.
Our campsite on Saturday evening: 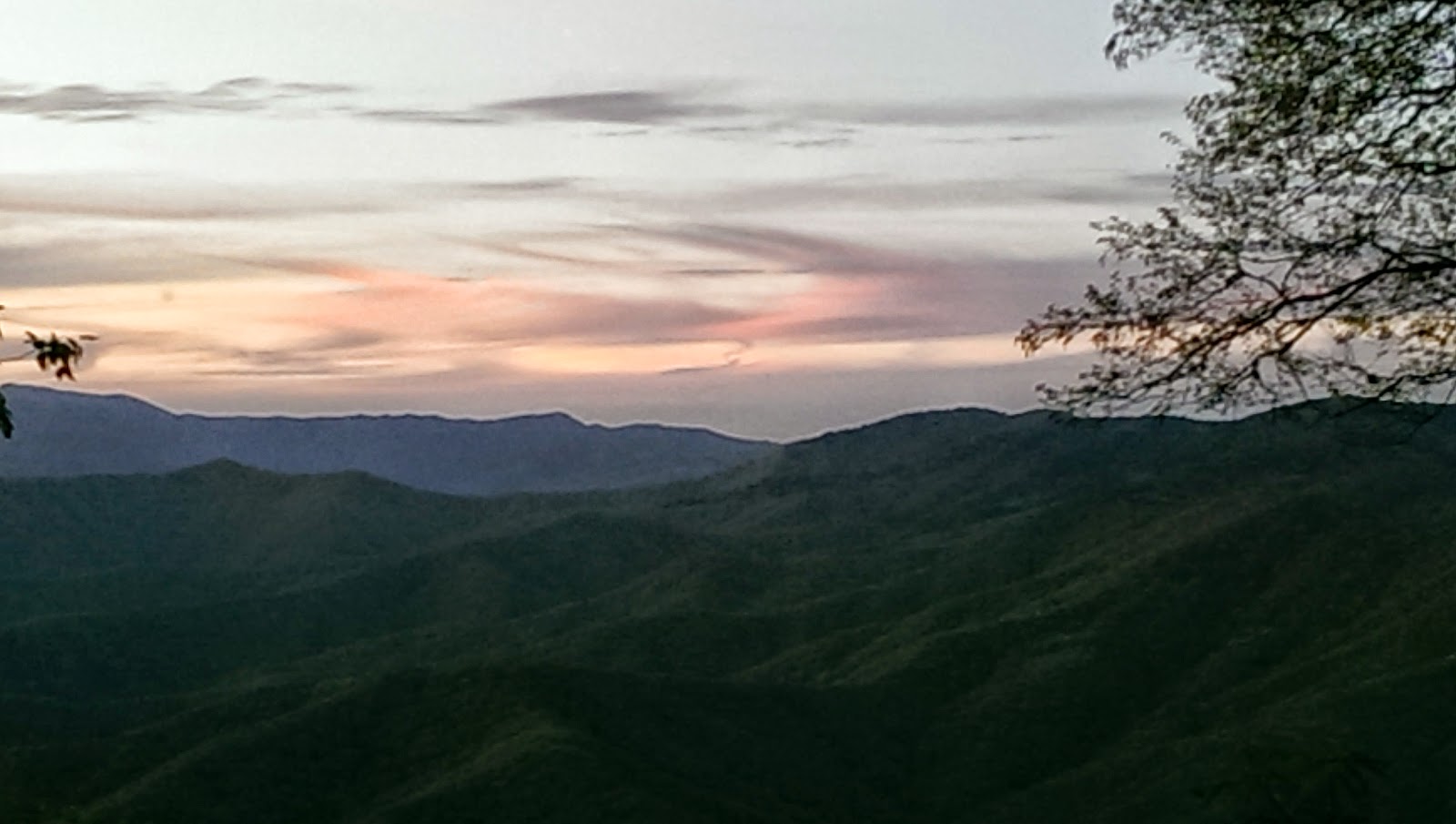 And on Sunday morning: 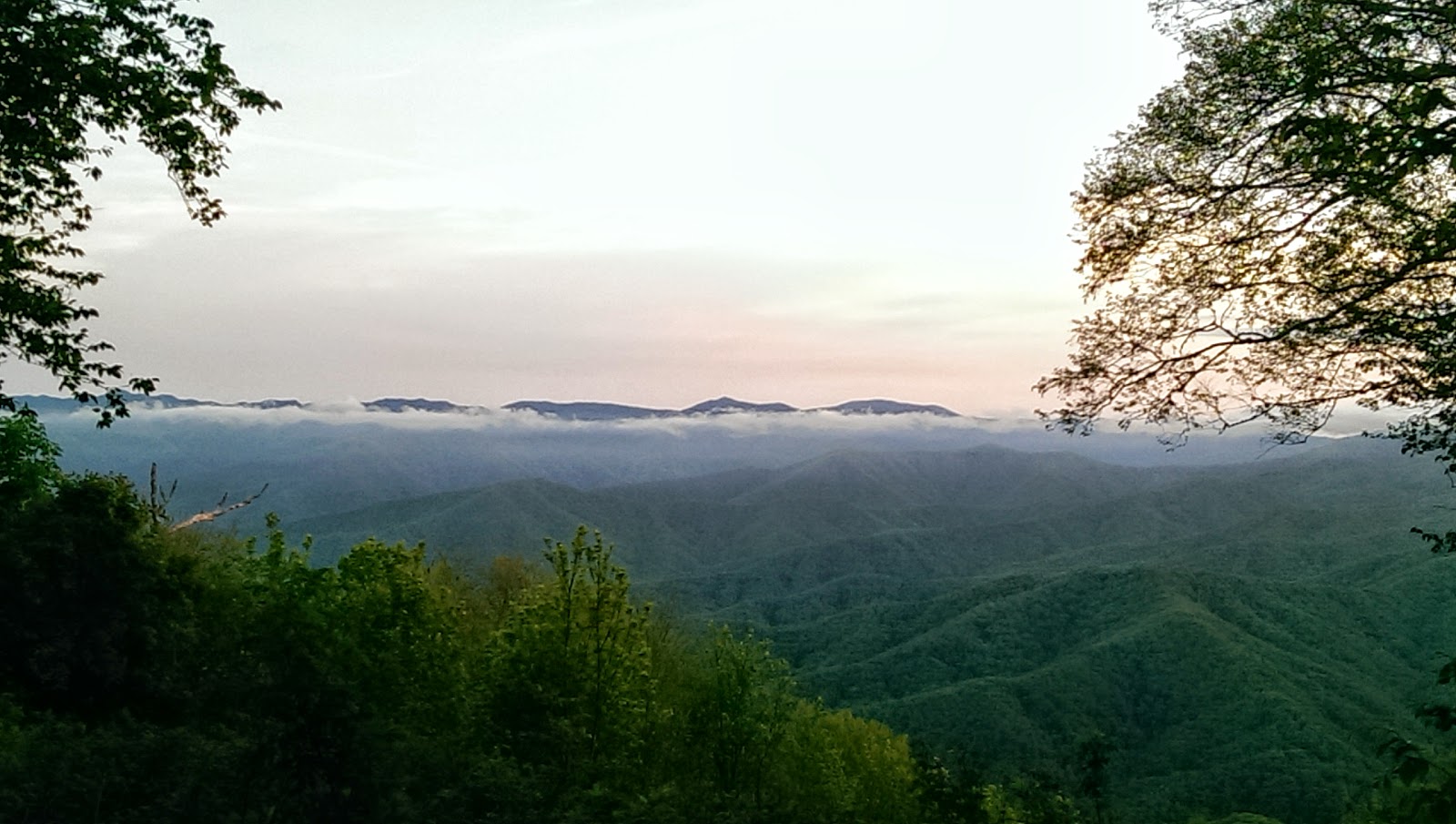 On the way home, we went into a couple of campgrounds in the National Park (Mile High is on the Cherokee Reservation) to check them out.  We have camped in Cades Cove but not the other 2, and, after looking through them and marking some sites that we really liked, decided the other 2 are much nicer.  The sites are bigger than Cades Cove, so it doesn't feel like you're right on top of your neighbor.
We went by some of the places that I mentioned on my A-Z Challenge, like Oconaluftee Visitor's Center, Mingus Mill, Elkmont, Clingmans Dome, Newfound Gap, Metcalf Bottoms, Juney Whank Falls, and the Indian Head.  There were quite a few people parked along the road at the Alum Cave Trailhead.  Yesterday was definitely just about the perfect day to take a hike, and there were an awful lot of people taking advantage of the Park.
Monday, we washed the camper.  It was pretty nasty with all of the pollen that had settled on it.  She looks almost like new now.
I was also able to catch up with "House of Cards" (Netflix).  It's a really good series, but I don't understand why it's necessary to show such graphic sex scenes.  They really weren't necessary, and didn't add to the story at all.  The bad thing is that now I have to wait until January (I think) for Season 3.
Hope your weekend was just as wonderful, and that you were able to get out and enjoy some sunshine!