It All Started With a Trophy 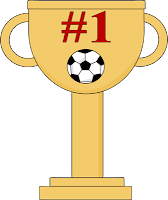 Disclaimer: This post reflects my opinions. If you don't like it, don't read it!
This post is more or less a follow-up to my post titled Being Tolerant of Tolerance. I haven't been much of a "thinker" lately, so my posts have been few & far between.
I have never wanted to just walk away from my job as much as I did at the beginning of last week. I love what I do (Speech/Language Pathologist), and I love the setting where I work (public schools). But, GEESH, am I wondering what in the world is happening to our country!
Apparently, to avoid lawsuits, if a parent comes in and says that her son identifies himself as a female, a female he is.  But wait...it gets better. The schools are encouraged to have a uni-sex bathroom that is available to all students so that an anatomically male student is not using the restroom with females. I'm sorry, but I find it hard to believe that an elementary student would be in that much conflict at that early age. If he/she is, then I would hope that the parents seek out counseling for the child. Why can't a girl be a "tomboy" anymore? I think I was definitely one growing up, but I never...not ever...identified myself as a boy. I remember people thinking I was a boy...until I got close to them and they could see I wasn't. Heck, when I'm out in a t-shirt & jeans, I still have people call me "sir"! Kids are what you expect them to be. If a girl is a "tomboy" & her parental unit goes to the school and says she identifies herself as a boy, I truly believe that the girl is going to feel that there's something wrong & that maybe she should have been a boy. As adults, we forget how impressionable young children are. They aren't able to handle and grasp adult conversations.
CH, YS, & I were discussing this, and YS said he agreed with the whole identifying as the opposite gender, but only after the child is 16. He also said, "what if a child comes in and says he's a ninja?" And so it begins.
It goes farther than gender. No more describing milk as "white" or "chocolate". (I'm not kidding.) I feel like all of the tiptoeing is adding more stress and taking teachers' focuses away from educating their students. Why are we letting a small minority dictate the majority? What can we do about it?
I'm just over it all; it's getting ridiculous. I blame the whole "every child gets a trophy" thing. Life is full of disappointments; kids need to learn to deal with not being the best, or, in some cases, not even being average. We're not all the same (thank God!); we weren't made the same. I'm concerned with how this young generation is going to be responsible adults, running our country and having to take care of the geriatric population (which would be me!).
David McCullough, Jr., during a commencement speech, said "You've been pampered, cosseted, doted upon, helmeted, bubble-wrapped," he told the graduates. "But do not get the idea you're anything special. Because you are not." If you haven't heard the complete speech, you can find it here.
I wonder if our parents thought the same thing with all of the "free love" and "sex and drugs" of the 60's & 70's. Did they think our country was going to pot, too? The kids today are going to take all of this as "normal", and they won't know any different. But we will. And we do.
If I could have walked away at the beginning of the week, I definitely would have thought hard about doing so.
This is my favorite commercial on tv right now. It hits the nail right on the head!