Have I mentioned lately how much I love my sisters? 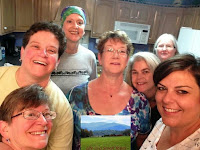 We had another successful Sisters' Weekend, even with getting started a day earlier than usual! 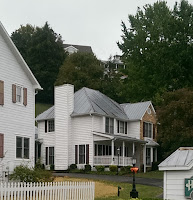 5 of us went up Thursday, got settled, and went out for dinner. 2 hours later, we got to eat. 1 of my sisters wanted to go to Dead Red Lobster since her husband doesn't eat seafood. We were told that it would be 45 minutes to an hour wait, but we didn't believe them because there a lot of empty, clean tables. We sat  outside and talked, which is what we would've done if we had stayed at the house. After more than an hour, we decided to go across the street to Joe's Crab Shack. The sister that wanted to go there turned in our buzzer and told her thanks, but no thanks. We went across the street, were immediately seated, and were eating within 15-20 minutes of walking in the door.  We spent the rest of the evening talking & laughing.
Friday, we ate breakfast and then went on a wine tour.

There are 5 on the tour, but we only did 3 & ended up getting a nice little glass. There isn't an expiration date on the passports that you had to get stamped, so I think YS & I are going on a field trip to the other 2 on Friday. At 1 of the wineries we were able to take a tour of the actual winery. I swear the tour guide kept looking at our boobs. Very disturbing.  And creepy. And to top it off, at that place you only were allowed 2 samples of wine as opposed to 4 at the other 2 places. Definitely not my favorite one.
Friday evening, the other 2 sisters-in-law came. My sister that gives me stuff & I made dinner. Or rather, she made dinner & I threw a bag of salad in a bowl! I did help her put them together, though.
Saturday morning, more eating, followed by shopping. There's an outlet there, so we spent a few hours there. We all started in Sketchers, then everybody went their own way, depending on what we were looking for. Just about everybody had something they needed to get, so I don't think any of us were wandering aimlessly.
When we got back to the house, we turned on the tv & watched football games. We Skyped with our sister who is working on her Ph.D. in Tx. She was at a cousin's tailgate party, so it was pretty quick before we lost the connection. We tried again after she got back to her apartment, but I couldn't get any sound.
Sunday is always a sad day because that's when we go home. But not before going out to eat! :)
We almost always go to The Apple Barn to eat before we leave. We had our name on the list and sat around for about 30 minutes chatting. 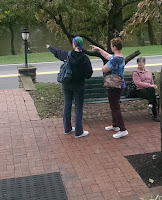 Pointing to how high the river was...it rained most of the weekend.

Then the manager comes out and tells us that a goose (yes, a goose) ran into the power line and knocked out the power. (That explains our power outage when I was in the shower.) That caused problems with the vent, which was causing some gas back-up. He said we could go up to the grill, and they called in the list so we didn't have to go to the back of the line. (That may or may not have been suggested by 1 of my sisters.) We went to the grill (which is still on the grounds), ate, and then did some last minute shopping in the Christmas Shop. Some of us were going to get an apple pie from the store, but...no power in that section of the place.
I'm glad we waited until October to go this year. We had a "parent conference day" on Friday, but we weren't required to be there as long as we document 6 hours of parent conferences. Plus, it was cooler. Plus, we got to see cute things like this:

We look forward to this weekend so much every year. This was an especially sweet one, except that the sister in Tx. wasn't here. Hopefully next year she'll make it. We still brought too much food and drinks, but we did better with the food! (Better too much than not enough, right?) We also will make sure we get a 4 bedroom so no one has to sleep on the couch.
Last year, Mama's death was still very fresh and we had just been together 6 weeks prior to our weekend. (We went in early Sept. last year.) We had some nice talks and shared sweet memories. Even though I may have been accused of being spoiled, it was a fantastic weekend!
Email ThisBlogThis!Share to TwitterShare to FacebookShare to Pinterest
Labels: family, sisters, weekend