The Passing of a Legend

We all know that no one lives forever, but there are some people who have passed away that have left us in shock.
Elvis: Do you remember where you were when you heard he died? I was at band camp, walking across the field when we were told the news. We were just shocked beyond belief. He was bigger than life...it seemed he would be with us forever.
Lady Diana: I remember when news broke about the car accident, I just knew she would be taken to the hospital and eventually be okay. She had so much more to give to the world; it was such a tragedy.
And now, Pat Summitt. If you know anything about women's basketball, you know about Pat. She was diagnosed with early onset dementia/Alzheimers 5 years ago, but somehow we thought she'd be around for a long time.
She IS women's basketball. She began coaching at the University of Tennessee (THE UT, for you Texas people!) right after she graduated from UT-Martin at the age of 22. She did it all: coach, drive the bus, wash the uniforms. She fought for women's basketball to be noticed, and she did it well.
Every single one of her 4 year players graduated. Every.Single.One. She was known for sitting in class (or having one of her coaches do it) with her students when they were having trouble. She required her players to sit in the front row. If any of her players...even the "star" players"...didn't follow her rules, they sat on the bench or didn't travel to away games. She didn't play around. She cared about those young women as people, not just players.
And that stare. Oh...My. I remember telling my mom that I would have done anything she wanted me to just to not have that stare directed at me. I always felt so sorry for those players who were on the receiving end.
I didn't know her personally; I never had the opportunity to meet her, but, like everyone else in the Knoxville area, I felt like I did.
I didn't play basketball past my junior high years, but I don't know of very many young girls who dreamed of playing for Pat & the Lady Vols. Not just around East Tennessee, but all over the U.S.; even Gino Auriemma's (coach for UConn) daughter wanted to play for her!
Not everyone may have cared for her, but I don't think you'll find one person who didn't respect her: Strong-willed, determined, ethical, and still being full of heart and concern for those in her life. She will be deeply missed. Women's basketball won't be the same without her. The University of Tennessee won't be the same without her.
Please keep her son, Tyler, in  your prayers.

This is the only thing I have with Pat's autograph. I almost threw it out a few months ago...I'm glad I didn't! 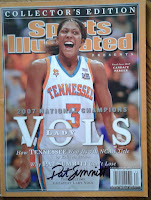