What an awesome vacation we had! I had never been further west than Texas (except for a quick weekend to Phoenix for my nephew's wedding), so I was really looking forward to seeing a different part of the country.
We started off our vacation with a 2-day visit with one of my sisters. I hadn't been to her current house, so I was really excited to see it...oh, and her! I can't believe I didn't get a picture of the 2 of us. (Bad blogger....very bad blogger!)
I got to see the St. Louis Arch for the first time. The Small Town's high school band participated in their St. Patrick's Day Parade when YS was a junior, so he has actually been to the top. 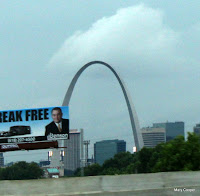 As we went over the bridge (which apparently had been built since the last time CH went through St. Louis...he talked about how horrible it was to go through that city but was pleasantly surprised at how easy it was this time), I was busy taking pictures. when we got to the other side, I asked CH when we got into Missouri; he looked at me kind of funny & said we hit the state line When we went over the bridge. I was too busy taking pictures to notice the sign! 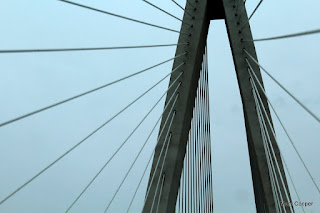 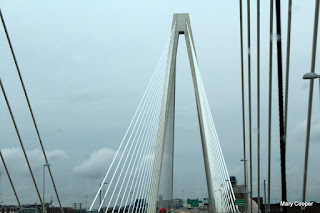 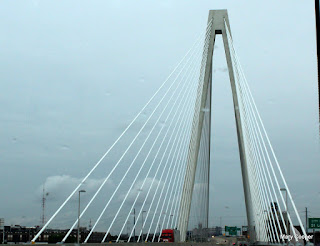 The drive up was somewhat uneventful, except for the horrendous rain we drove through Saturday night. If Google maps hadn't frozen, we wouldn't have missed the exit that would have taken us around Kansas City, and we would have missed the rain. We ended up getting a hotel room that night...we were only about 1 1/2 hours from my sister's.
We drove the rest of the way in on Sunday morning, and arrived to see my sister standing at the end of the sidewalk with a huge smile on her face. My BIL was standing on the porch. He doesn't ever show much excitement, but I know he was secretly excited to see us!
She gave us a tour of their beautiful home; we were standing on the balcony looking out at the backyard, and she caught sight of a cardinal. She grabbed my hand & told me to look. No doubt Mama was looking down on us in approval. 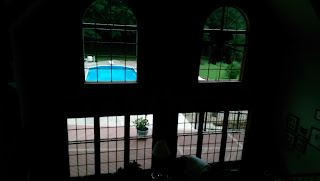 My sister is an absolutely marvelous cook: we ate really well while we were there! We originally had visions of us sitting around the pool, talking, but y'all, it was cold! YS (who went with us) and CH got in the pool; I stuck my feet in, but that was as far as I got. It was cold enough for us to have a fire in the firepit one night. 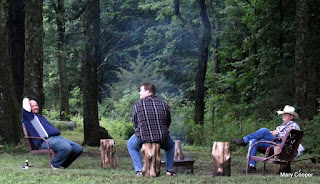 I even got to see one of my nephews! (That's  him on the left, YS in the middle and my BIL on the right.)
We did a bit of sight-seeing while we were there. My sister lives near the town where the Pony Express started. 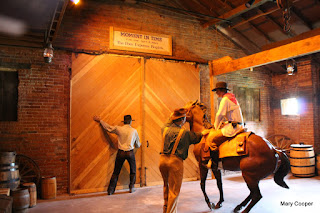 Very interesting history there. It was very much worth the $6 admission. 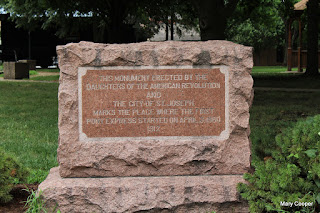 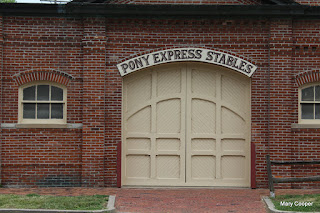 We also went by the house where Jesse James died. We didn't go in; my sister said that the only thing really of interest is the wall that has the hole from the bullet that killed him in it. We saw a picture of it & saved the $4. (The house isn't at the original location.) 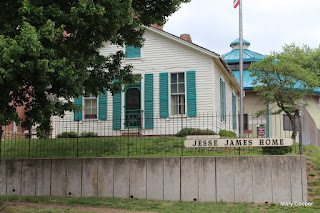 Just a couple more pictures of my sister's yard. They have a sweet little fish pond with a bridge over it and some lilypads in it. 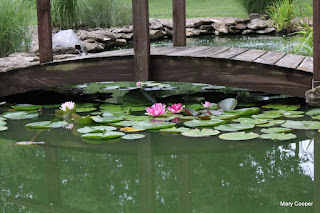 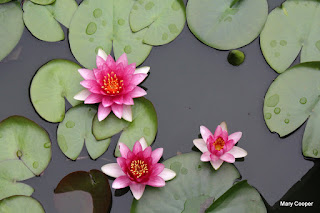 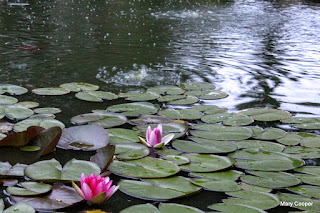 My sister was a little concerned that YS would get bored, but he got in there and the boys did their thing. 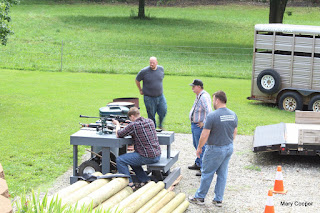 The only bad thing about the first leg of the trip was that it was over too soon and we had to leave. But we had more adventures to come!