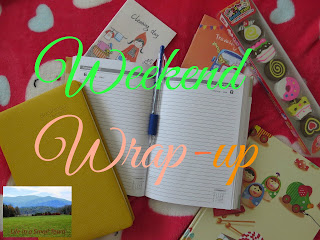 WHEW! What a weekend, y'all! The good news: I think I've got my mojo  "moto" (as in "motivation") back!
On Saturday, I spent all day cleaning. I met one of my sisters at my dad's house, and we cleaned for a couple of hours, then when I got home, I cleaned my house. I was afraid to sit down because I knew if I did, I'd stop. So I cleaned. All. Day. Long. And then I was so hyped up that I couldn't go to sleep. {sigh}
Sunday started out as the usual: Mass followed by coming home & writing a blog post. CH & Laika went camping Saturday night with some friends, so after he came home, unloaded his truck, and rested, we headed out furniture shopping. Our couch & loveseat was 12 years old, so it was time. They served us well, but when you treat your dogs as part of the family (meaning you let them on the couch), they just don't hold up as well as they would. We opted for more "pet friendly" couches this go 'round. And, we ended up getting 2 couches because it was actually cheaper than getting a couch and a loveseat with the Labor Day Sale going on.
Sunday night, we celebrated someone who had his 91st birthday. He was such a good sport about letting us have the party at his house...even though he tacked on the condition of us cleaning his house! 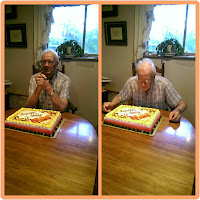 It was a small intimate party...only 10 of us there, but we had a good time.
Monday, I did what should have been done last Spring Break, except CH & I played at Edisto instead: Powerwash the back porch. I also snipped the butterfly bush that was starting to take over the porch. It's amazing how just getting rid of 1 thing changes the look!
Back to powerwashing: what a sense of accomplishment! It's kind of like painting: you can slowly see it transform. After 2 hours (our powerwasher is small), it was done. 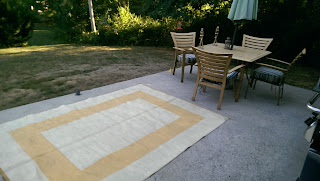 Then it was time to go pick up our couches. After the first trip (it took 2), we asked them to go ahead and take the other one out of the wrapping before we put it in the trailer. That made it much easier for CH & YS to get it in the house. Getting the old couch & loveseat out of the house was a little bit harder. YS said he wanted the loveseat for the basement, but we took the couch to the side of the road. Within an hour, someone got it. But, he was nice enough to ask if he could have it instead of just taking it. He turned out to be the son of a teacher at the Small Town Middle School, who MS & YS had when they were students there.
We're very pleased with the new couches...CH's chair will stay until he gets a new one. We actually had picked out another couch/loveseat and were looking for the recliners when we found our couch...we never made it to the recliners! 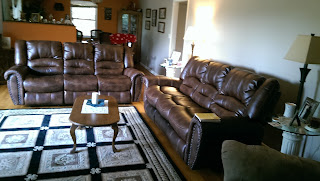 Now I just need this motivation to transfer to work this week!