A Bust of a Vacation


For the past few years, CH & I have taken a vacation between Christmas & New Year's. This one was a real bust of a vacation.


This year for our annual Christmas-New Year’s getaway, we decided to try something different and go somewhere we’ve never been. Last year’s vacation to St. Andrews State Park (Fl.) was cold and rainy, so we decided to go a little further south. That turned out to be a good plan because St. Andrews was hit hard by Hurricane Michael and is, for all purposes, non-existent at the moment. One of the volunteers we met either last year or the year before mentioned Manatee Springs State Park so that was our choice for this year.
We arrived about 3 ½ hours later than we expected because…Atlanta. Going through Atlanta was fine, the problem was just south where we ran into traffic being at a standstill. Google was a champ, re-routing us around the traffic a couple of times.
I called the campground that morning since I already knew we would be arriving after sundown when the gate is locked. I was told that the code was not given out until after 4:00, so I called again that afternoon and received the number to get into the campground. When we arrived at our site (#75) we were greeted by a couple of deer who were bedding down just behind our site. They ended up moving as we quickly set up the camper so we could crawl into bed after our 8.5 hour turned 12 hour trip. 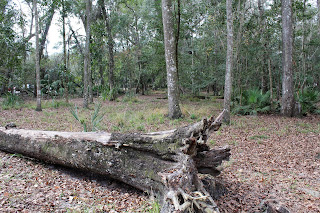 Campsite #75 ended up being a good choice; 74 has a trail leading to the springs right behind it so people were intermittently walking to get to the springs to see the manatees. Unfortunately, the area had quite a bit of rain; swimming was not allowed due to “brown-out” conditions of the spring. We were able to see the manatee coming up when they took breaths, but the water was too murky to see them otherwise. I heard people commenting that usually the water is crystal clear. The springs feed into the Suwannee River, so when Georgia has a lot of rain the water backs up into the spring. 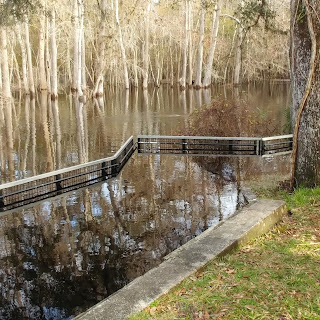 The first morning there we saw a family of manatees, at least we saw the family come up for breaths. That afternoon I saw a mama and her baby, along with a couple of other manatees. There was also an egret hanging around as well as some cormorants.  Vultures were roosting around the springs and there were a lot of them! I heard an owl and some woodpeckers, and the little gray squirrels were all over the place. Then there was the water moccasin I saw laying on top of a bush in the water. 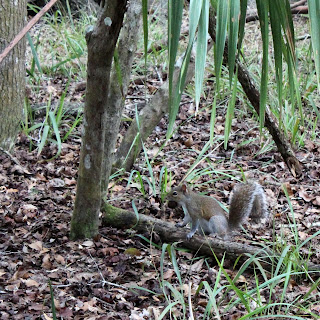 The park is next to the small town of Chiefland. Not a big town, but there is a Wal-Mart, Winn Dixie, and the ever needed Dollar General. There are also plenty of places to eat.
OS surprised us by coming home on Christmas Eve; when I got home from Midnight Mass his car was in the driveway. For some reason I had a sneaky suspicion he was coming home. He also brought the flu with him, so he spent most of Christmas Day sleeping. He offered to stay and take care of the dogs while we were gone, so that saved us from the hassle of taking them to the vet.
CH ended up with the yuckies while we were gone, so I spent the day just relaxing and reading. That was fine, because there’s not much to do around Chiefland anyway. We decided to cut our vacation short and come home that Saturday. The plan was to drive until CH felt he couldn't drive any longer, then we would get a hotel room and drive the rest of the way in the next morning. CH ended up able to drive the whole way. There were some snags around Atlanta, but we just listened to Google Maps and managed to miss most of it. It was rather nice to be at home for New Year's, especially since I had to be at work on Wed.
We aren't sure what we're doing for next year. The couple who was next to us gave us the names of some parks they were going to so I may check those out online and see what's up with those. I really missed being in The Keys this year, but we'll see what we end up doing!