When There's a Four Letter Word in the Forecast 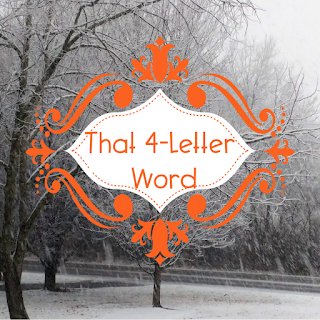 It's a funny thing to consider how people all of the United States react when there's a four letter word that begins with "S" in the forecast. When you consider it, some of the actions will have you scratching your head or laughing out loud.

I live in the South. There's not much snow here, but since I work in the schools, we live for the hope of snow in the winter. It doesn't matter how much, and it doesn't matter where it is as long as it's in the county where I work. A lot of us keep an eye on the forecast and tend to get our hopes up when we see that sweet little symbol on our phones.❆ We also feel a lot of disappointment when we wake up and nothing looks different outside. We grumble that we stayed up too late the night before because the meteorologist said it was a sure thing. Sometimes it is a sure thing, but just north of us.
I've never bought into the whole "let's run to the store and make sure we have plenty of bread and milk", but the times I have had to run and get some milk because we're out have been frustrating. I mean, it's not like we're going to be stuck inside for days. It's very rare when the snow hasn't all melted by mid-afternoon.

I have a friend who lives in New Hampshire. When it snows they go about their everyday life. Sure, they have snow days and ice days, but those crazy Northerners choose to stand outside in the snow and watch cross country ski races! My friend has a generator so they still have some semblance of modern life when the power goes out. They're the ones who need to stock up on their food, not southerners who think an inch of snow is Armageddon.

Let me just say: snow on the weekends is a waste. Sure I still get a little excited to see the white stuff floating down, but unless it happens on a Sunday when there's not a holiday on Monday, it's a waste. That is unless there's enough of it that the melting remnants stay on the roads enough to ice over.  Then, we'll take a delayed start, which is almost as good as a day off. On those days the Kindergarten classes have breakfast and lunch within the span of an hour. Crazy, huh?

There's so much excitement when I see ❆ on the forecast map. It's easy to get my hopes up. CH doesn't understand the excitement, but that four letter word in the forecast is like a Christmas present, especially in the South. 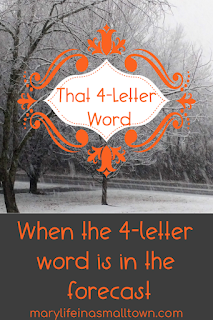