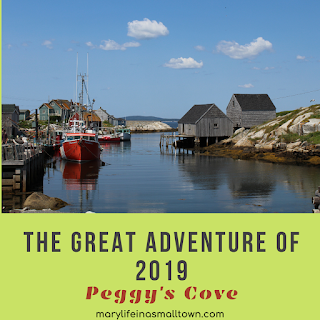 We left the AirBnB behind and began to make our way to our next stay. We were headed to The Ovens Natural Park for a couple of nights of camping. But since we had plenty of time to get there, we made a slight detour and headed for Peggy's Cove. CH kept talking about how the landscape of the Canadian Maritimes looked like Ireland, but I told him it didn't...until we got to Peggy's Cove. This looked like the Ireland I saw: 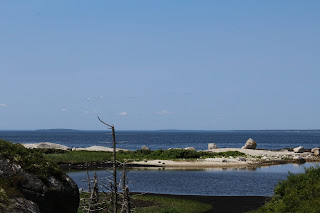 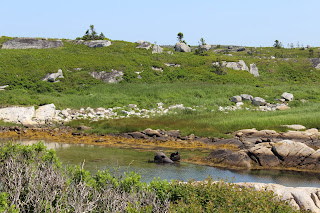 I think most people go to Peggy's Cove for the lighthouse; we just enjoyed walking around and enjoyed the scenery. 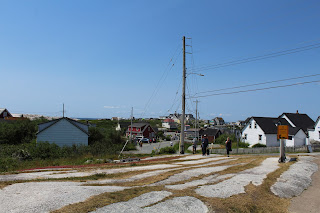 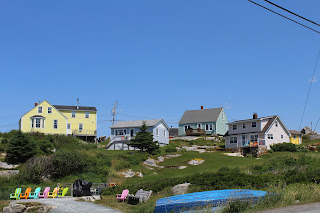 Once we walked into the actual village, there was a boat tour. We thought, "why not?" and jumped on in. It was beautiful seeing the area from the water. The rocks that were formed that appear to be haphazardly were incredible. 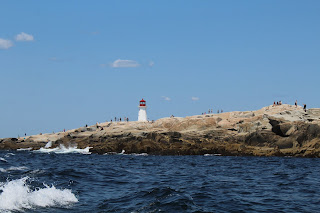 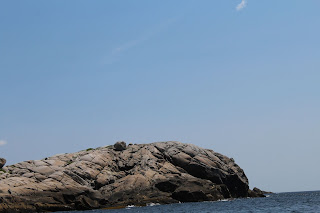 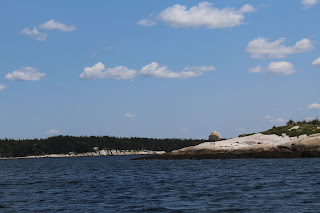 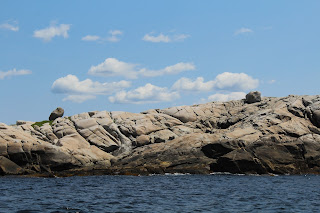 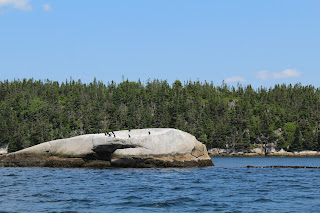 No seals, but we did see these birds.
East Dover is another fishing village next to Peggy's Cove that looked equally as charming. 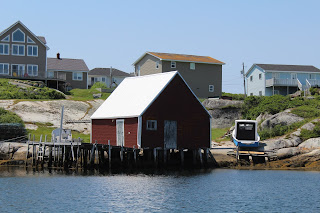 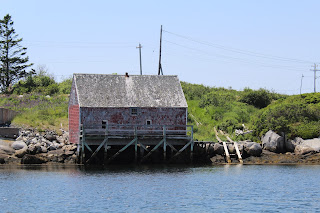 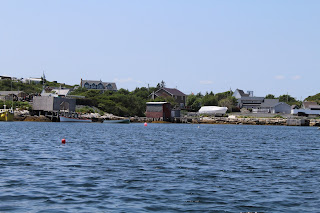 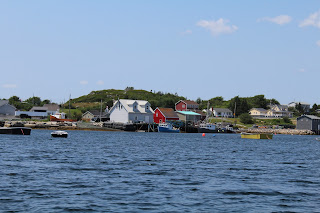 Just as we made our way back in front of the lighthouse, a staff member obliged us by taking our picture as we went by: 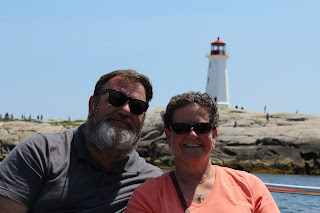 There is one other point of interest that we saw while there:

We almost missed the William E. deGarthe Memorial. It is right next to a house, so it appears to be part of the yard. This monument is in honor of  the fishermen of Nova Scotia. The sculpture depicts 32 fishermen, their wives and children, St. Elmo with wings spread, and the legendary Peggy of Peggy’s Cove. It was absolutely amazing. And, yes, it actually is in someone's yard...William E. deGarthe. At his death, the sculpture was about 80% completed.
After leaving Peggy's Cove, we continued on toward our destination. We stopped to eat at a place called rhubarb. It had great atmosphere; we were able to sit at a table on an enclosed porch and have a nice lunch. As it happens, there was a group of people from around Atlanta at a table near us. The accents sounded like home! 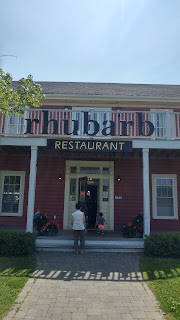 Continuing on, at one point we went around a curve and were absolutely struck by this view: 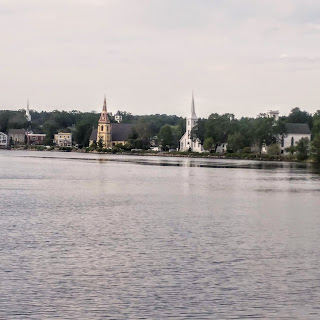 Seriously, it was so unexpected that it just took our breath away. Seeing Mahone Bay turned out to be one of the highlights of the trip. Unfortunately, we didn't stop and walk through "downtown" to see what all this town has to offer. This is one place that we want to return to and spend a full day or two exploring.
I read about a little town called Lunenburg. The "Old Town" is a UNESCO Heritage Site so I was intrigued. But, we ended up being a little disappointed. We walked along the waterfront but there really didn't appear to be much there. We just didn't think it lived up to the hype I read about. You can definitely tell there is German influence in the architecture. 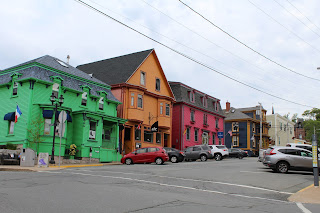 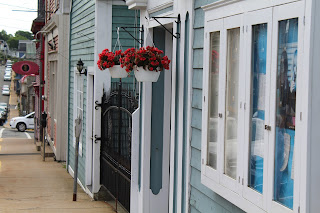 Theresa E. Conner is a saltbanking schooner, designed to preserve the fish in saltwater. It was in service from 1938 to 1966 and is now a museum. It was the last saltbanking schooler to run out of Lunenburg.
(Information from Fisheries Museum of the Atlantic.) 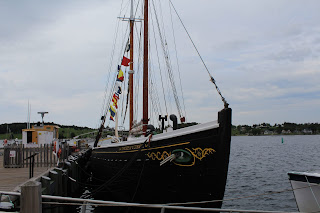 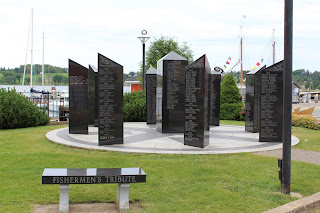 View from the park on top of a hill to the harbour: 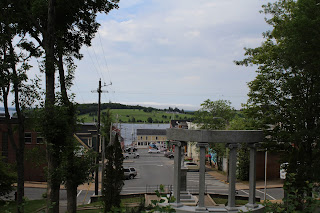 St. John Anglican Church. The 2nd Church of England built in Nova Scotia (1753) and the 2nd oldest remaining Protestant Church in the country. The original congregation was comprised mostly of German Lutherans. The same foundry that made Big Ben and the Liberty Bell made the original bell. 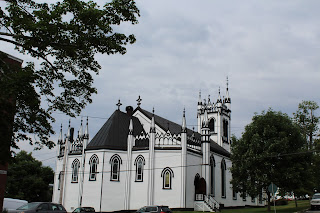 When it was built, the wood came from King's Chapel in Boston, which was disassembled from the inside. The wood was carried through the window and shipped to Lunenburg. 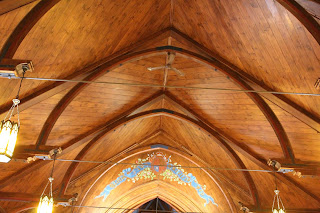 The stars above the altar are said to be a mystery. Some believe the stars depict the sky the night that Jesus was born, as it looked in Lunenburg on that night. 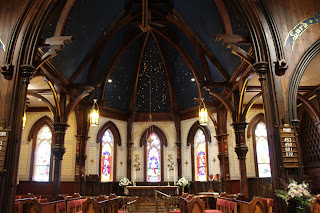 Lunenburg Academy opened its doors in 1893 and is a National Historic Site. This building was built after a fire destroyed the current school. It served as a school until 2012 when concerns over the cost of maintenance caused the school board to turn it over to the town. Renovations began shortly after we visited. The building is used for a library and music school, as well as space rented out to businesses as offices. 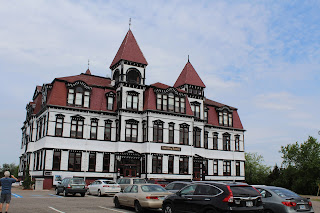 If we knew at the beginning of the day what we knew at the end, we would have spent more time in Mahone Bay. But I think that just means we'll have to go back!
Next stop: camping at The Ovens Natural Park. 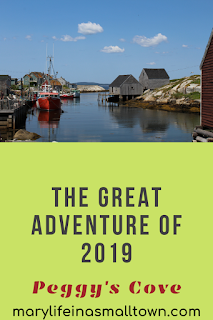