The End of An Era

Okay, let's try this post again and see if I can remember exactly what I said before! 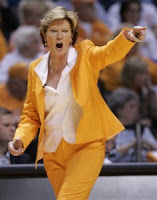 Yesterday marked the End of an Era for Lady Vols' Fans.  The Lady Vols haven't had a new coach in 38 years.  When (then) Pat Head took over the reigns as head coach, she was a graduate student and the players were very close to her age.  Pat did it all:  coach, trainer, bus driver, uniform washer, and fund-raiser.  She not only made the UT Program the premier ladies' college basketball program; she put Ladies' Basketball on the map.

I was 12 years old when she took over.  I remember watching a basketball game on tv when I was in high school.  Pat was staring down a player in her famous icy stare, then called a time out.  I told my mom that if I was that player, no way would I have wanted to go over and stand next to her. Pat was a yeller, but a very efficient one:  there has never been an NCAA Tournament without the Lady Vols, 1098 wins out of 1306 games,  8-time National Champion, 2 basketball courts bare her name (UTK and UT-Martin); she is the winningest coach of all time (Duke's men's coach needs 181 wins to catch her).  With all of that, probably her most impressive record is the 100% graduation rate of players who stuck with the program for their college career. She has been known to sit in class with players having a difficult time, as well as having players miss a game due to upcoming tests. Her players are required to sit in the front row during class. She was asked a couple of times to consider being the men's coach, as well as a coach for WNBA teams. Her heart was with the Lady Vols.

Pat Summitt is the epitome of class.  When a competitor (who is known as "he who shall not be named" around here!) openly criticized her for not continuing the rivalry, she refused to address it.  Anytime something happened to another sports team on campus, one of the 1st responses would be, "Pat wouldn't have allowed that to happen."

So, you can imagine everyone's dismay here in Big Orange Country when, in August, she made the announcement that she had been diagnosed with early onset dementia-Alzheimers type. While she refused for anyone to throw her  a pity party, it was disheartening for fans to see her on the sideline, sitting in a chair, allowing one of the assistant coaches to take over her role.  Even more sad was her obvious absence from interviews.  A couple of times when she was interviewed, her lack of word finding skills was apparent.  Maybe it's just that we didn't notice it before.

Pat is a tough woman, for sure.  A few years ago, she had a raccoon on her back porch; she went out and chased it away, dislocating her shoulder in the meantime.  She has shown us that she has a good sense of humor: After then men's basketball coach Bruce Pearl showed up at a Lady Vols game topless and wearing body paint, she returned the favor at a men's game by dressing up as a cheerleader, leading "Rocky Top" as well as some cheers, and was the top of a pyramid that included now-head coach Holly Warlick and assistant coach Dean Lockwood.  She is legend...wait for it....dary!

She now has a new title:  Head Coach Emeritus, which means she will no longer be on the team's bench (per NCAA rules).  It's not going to be the same without her. 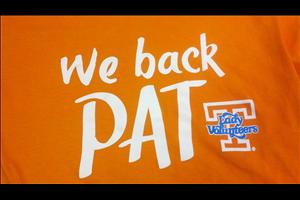 Pat Summitt IS the Lady Vols!