Sunday a fire broke out at a place in the Big City that stores mulch and other organic material.  The fire is 9 acres big.  It shouldn't affect us, right?  Up until this morning, I hadn't noticed it. This morning I smelled it as I left for work, and I noticed a haze in the direction of the Big Town.  The news said that the winds had shifted a bit, so I figured it meant it was away from us.  I'm sure we've all seen the big pile of mulch that appears to have steam coming from it.  Apparently the mulch at this place has caught on fire before, but because of lightening strikes and even spontaneous combustion a couple of times, but it's never been this big.  And this morning it was reported that run off from the water got into a creek and has killed some fish.
They're doing what they can to get this out:  they even had some fire trucks from the airport come in and try to put it out.  Apparently a back hoe (that they brought in to try to break through the mulch so the firefighters could spray the actual fire) was the one that broke the barrier and allowed run off in the creek, which runs into a river, which resulted in the dead fish. So, his duties have changed to try to build back up the barrier to save the fish.  Poor guy!  If it was a mistake, he must feel awful!
The more they spray water on the pile, the more smoke.  Businesses and residences have been told to turn off the HVAC if it brings in outside air, and the fire dept. captain advised to watch for carbon monoxide poisoning, even though the material is organic.  It's expected to continue burning for days. 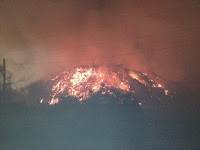 Photos by Mark McIntyre, special to the News-Sentinel
So...has there been anything exciting going on where you live?
Email ThisBlogThis!Share to TwitterShare to FacebookShare to Pinterest
Labels: big city