How do I even begin to talk about the weekend?  It was the best weekend I've had in a long time.  I guess I should start at the beginning:
Friday night was the Small Town High School's first regular season home football game, not counting the Kick-Off Classic. You know what that means:  An evening of wrapping burgers and CH running up and down the sidelines with the chains.   It was so awesome seeing YS in his new position: 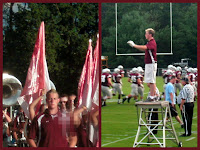 Saturday morning I took Laika to the vet to be boarded for the weekend, then took Pepper & Ally to my parents' house for the weekend.  Then, CH, YS, & I hit the road.  We have some friends who own some land in the mountains.  CH met this group of friends from riding motorcycles, and I met them through him.  It had been about 10 years since I'd seen most of them...10 years too long.  To be perfectly honest, there are times when I feel a bit left out since all of them ride motorcycles and have a lot of stories to tell about good times they've shared.  And, they've known each other a lot longer than I've known them.  They do their best to make sure I feel like I belong, and it is funny to listen to the stories.
We got there Saturday afternoon, and the view was just breathtaking: 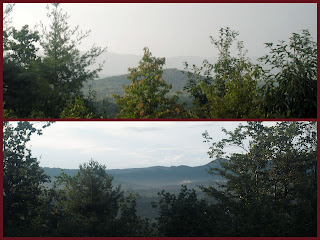 I started to help CH & YS set up our camp, but there was a group who was waiting for us to get there so they could go to a local winery.  The host of the weekend "made" me go with them.  Yep, he had to twist my arm really hard. 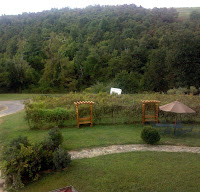 Someone bought a couple of bottles of wine, and we sat on the porch and drank wine, ate cheese & bread, and watched the rainstorm.

(There's outdoor seating just to the left of the tarp.)
We went back to camp, ate brats, and enjoyed the company and the view: 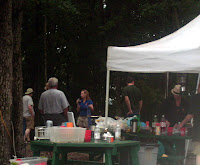 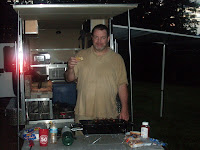 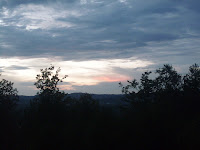 Sunday involved more visiting and a lot of laughter. 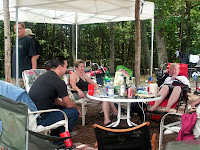 And, as usual, the guys found something that had to be fixed: 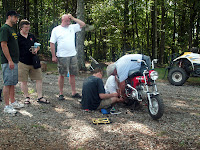 We watched a storm roll through the valley: 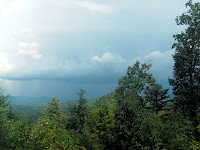 I trusted the host to take YS for a ride around his property: 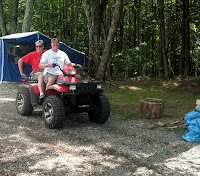 YS got a lesson in firearms from his dad: 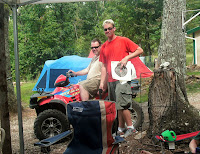 (He did quite well!)
The camper looked great with the mountains as the backdrop:

YS was undefeated with this game (until someone beat him later that night!) 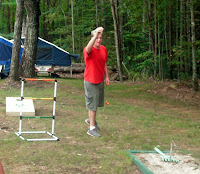 We had a couple of dogs who enjoyed the bones from a pork butt/shoulder that was smoked for Sunday dinner: 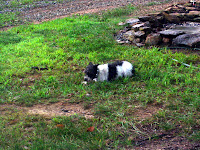 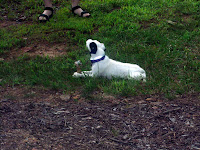 And then we experienced a downpour.  The cook made the decision to wait until the rain stopped before we could eat, so there was more visiting and, of course, more laughter. 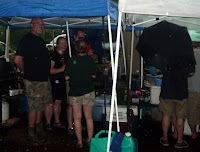 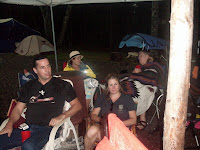 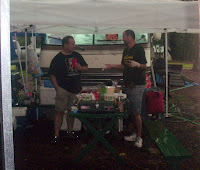 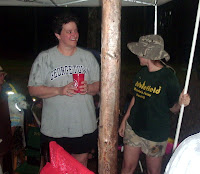 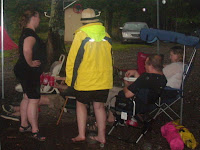 And then came the worst part of the weekend:  packing up and saying bye: 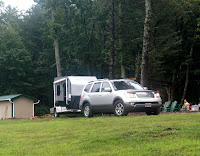 Some had to leave early:  Florida left first, followed by Michigan and Manitoba.  Next was Texas, then Ohio.  NC left after that.  After most of the campsite was cleaned up, we hit the road, leaving Missouri behind with the hosts, who are from NC. Our friends' land was the perfect spot for all of us to get together.  We didn't have to worry about how loud we were, and the guys (and some of the girls) could do "guy things".  They had the most amazing outhouse that was clean and almost like a real bathroom (minus the flush!). 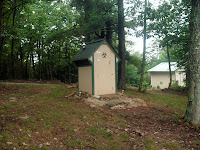 (Cute, huh?  Complete with a motion sensor light on the inside so you can see at night.  The best part:  it didn't smell!)

On our way home, we went through a little town that was having a big celebration over the weekend.    We thought about stopping, but I felt dirty and tired, so we decided to save that for another day. 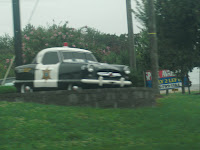 So...now it's back to reality.  Clothes have to be washed, and Laika will have to be picked up tomorrow afternoon.  But what a GREAT weekend!