I hope everybody had as wonderful a weekend as I did!  Last week was a short week at work:  only a 2 day work week!  Wednesday morning, we woke up to this: 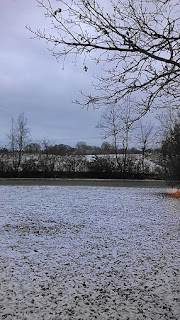 Just a little bit of snow, but I don't ever remember having snow in November before.  The roads were okay, most of the snow was just on the grassy areas. And, as is very typical here in the south, most of it was gone by the end of the day!
I took advantage of the free day by taking Laika & Pepper for a romp in the park:
It snowed on & off during the day, but it didn't stick.  I spent the rest of the day doing laundry, and getting things ready for Thanksgiving.  After a couple of disastrous episodes with a cake last week, I was holding my breath when I made this:

I was so pleased that it turned out!

CH, MS, & I left for CH's brother's house early on Thanksgiving morning.  (OS & YS spent the day with their GFs' families and had to work over the weekend.  YS is working at Target over the holiday, and ended up having to work Thanksgiving night.  He said the line wound all the way through half of the store...from the registers, around electronics, and then to the back of the store.)
This greeted us as we got closer to their house: 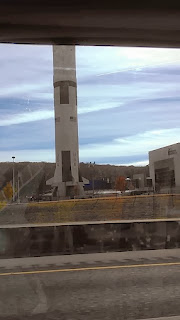 My SIL did an amazing job with the table centerpiece: 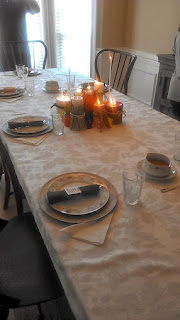 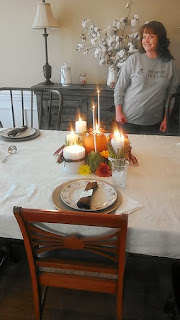 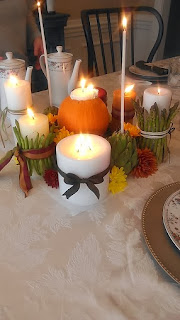 Don't you just love her sideboard?  The cotton looked great on it.  (This is an untouched picture!) 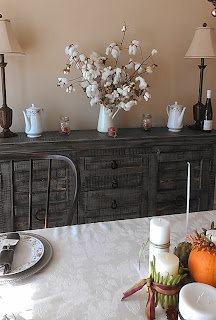 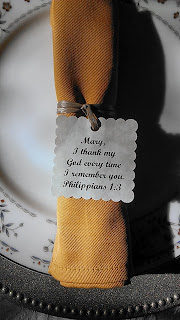 My BIL cooked a beautiful bird:  (well, actually 2 of them!) 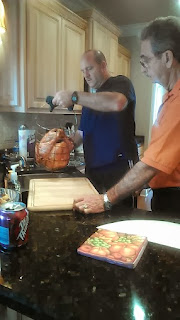 And my FIL carved it: 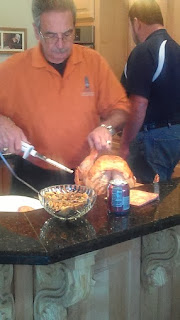 MS checking out the table:
(This was right before he called me "creepy"!) 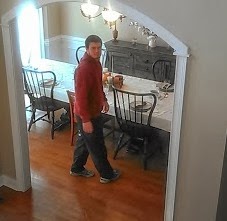 The "Fam" before we dug in: 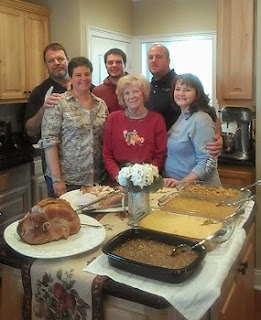 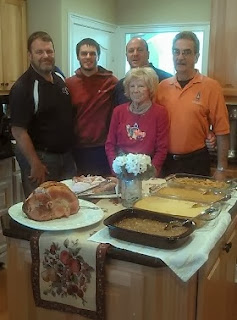 Dinner was followed up by cleaning up (YUCK!), a walk, and watching some football. 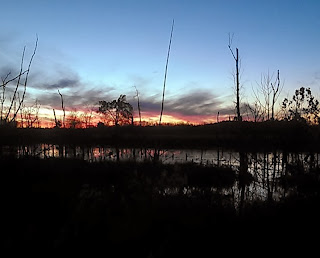 I ended the night playing Rummikub with my MIL & FIL.  My MIL said she had played a long time ago, but she remembered the rules like it was yesterday!

Friday, MS' girlfriend came down.  (She lives a couple of hours away from my BIL.)  That afternoon, the GF, my SIL, and I went to "Spirited Art".  The night before, my SIL & I had made some Spiced Apple Sangria to take:

Oh.My.Word!  This sangria was AMAZING!  I will definitely be making this again!
I was just a tad bit stressed about painting.  I'm not an artist by any stretch of the imagination.  I can't even draw a straight line with a ruler! SIL & I had already picked out our picture, so GF picked hers out when we got there.  Luckily, GF was the one who had the "more challenging" picture!  Our finished products: 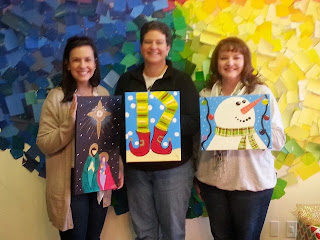 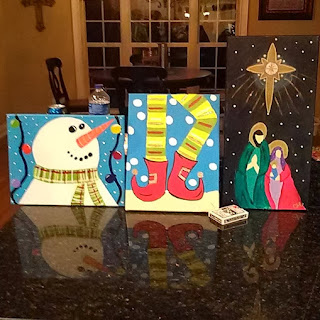 I had a little mishap while painting.  Not being the most observant person in the world, I kind of didn't notice that the bottom of the background wasn't blue until I looked over at some kids' paintings!  I just put a couple of coats of paint over the blue, and it worked out.  We got a pretty good laugh over that.  Is it perfect?  No, but I was pretty pleased with how it turned out; especially since I had visions of each leg being mis-shapen!
This made me feel great when I went into the bathroom:

After we got through painting, we ran to the bookstore real quick so I could get a book I needed for work this week, then we met everybody at a place that serves Korean food.  CH is from a military family, and they lived in Korea during his pre-teen years.  My MIL had to have bulgogi, so the guys (& MIL) had it while the rest of the girls had American.  I actually like it, but I just wasn't in the mood for it right then.

We left Saturday; I wanted to have a day to relax and get some stuff done before the craziness of the week starts.  MS went to GF's house so it was just CH, Laika, and I on the way home.  We got home just in time to watch the Auburn/Alabama game.  Just before we left, though, my FIL had to get a picture depicting our divided family.  Auburn is on top, 'Bama on the bottom: 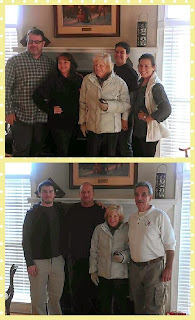 (Someone couldn't make up her mind!)
If you didn't watch the game, you missed a doozy!  I feel really badly for my SIL...my BIL is a Bama alum, and he really gets into the game.  I think it's a good thing we left on Saturday!
So, here I sit on Sunday writing this post.  This week is going to be crazy:  Flute Dress Rehearsal on Monday, my intern's last day is Wednesday (which means her grade is due on Friday), and the flute choir concert is on Thursday.  I forgot to mention that Small Town HS won their game on Friday:  75-18.  The team they played had been undefeated.  Friday afternoon they will play for their 13th state championship.  They'll play another undefeated team.  Small Town lost 1 game this year, and that was to the Rival High School, who is also playing for a state championship in 6A (Small Town plays in 3A).  Traditionally, our end of the state is known for having better football teams than the "other side", so we'll see.  The good thing is that I'm pretty sure our starters got plenty of rest last Friday!  I'll be watching it at home from the comfort of my couch.
I'll probably start decorating for Christmas next weekend.  Have you already done yours?
Email ThisBlogThis!Share to TwitterShare to FacebookShare to Pinterest
Labels: CH, family, holidays, MS