1. Are we always responsible for our actions? Are there any exceptions?I can't think of an instance when we wouldn't be.
2.  Has anyone from your home town become famous?If you follow sports (and specifically the Packers), you may have heard of Randall Cobb.  He played football with my 2 oldest boys.   He's the only one I can think of.
3. January was National Slow Cooker month. Do you own a slow cooker/crock pot? Did you use it last month? What's a favorite dish you make using a slow cooker or crock pot?I got this baby for Christmas, and it's been getting quite a work out: 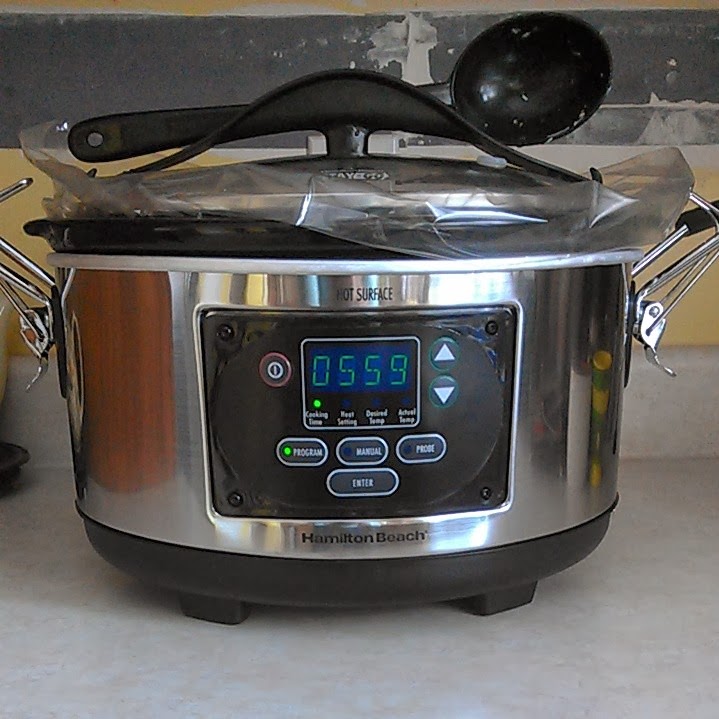 In fact, tomorrow, we're having ranch pork chops:  Pork Chops, a packet of dried ranch dressing, and 2 cans of cream of chicken soup.  I'm really liking that after the time is finished, the temperature switches over to "warm" so the food doesn't dry out.
4. How do you feel about private companies collecting data about you?I haven't really thought about it.  I know some people get really freaked out about it, but I'm indifferent to it.
5. The Games of the 2014 Winter Olympics kick off with their opening ceremony this coming Friday....will you be watching? Which Winter Olympic event would you most like to see in person? Have you ever been to Russia? Any desire to go, Olympics or otherwise?Figure skating.  It's so beautiful, and it's inside.  I have no desire to go to Russia, especially after going to the former East Germany last summer.  I don't really have any desire to go to the Olympics.  I'm fine watching it on tv.
6. Share a good or bad sports related memory from your childhood or teen years.This is from my college years, but it's the only one I could come up with!  I was a little sister for a fraternity in college, and we played intramural basketball.  We had one game that came down to the wire.  I had the ball (right around mid-court), and we were down to the last second.  I had no one to pass to, and everybody was yelling, "Shoot it!"  So, I shot it and it went in.  The coach yelled, "Hail, Mary!"  (although he may have actually meant a different form of the word "hail"!)  I have no idea how that ball went in.  I'm definitely not a basketball player!
7. What's a must have song for you on a work out play list? If you don't work out, run, swim, bike, walk, or anything else that could be construed as 'exercise', then what's a song that motivates you to at least get up off the couch?Why am I drawing a blank on this one???  Weird.
8.  Insert your own random thought here.
OS made it to his destination okay, and I'm resting easier knowing he's there.  It's a little strange to think that he's so far away...he's been 2 hours away for the past 7 years; now he's all the way across the country.
On a different note:  did anybody watch Catherine & Sean's wedding on tv?  If you did, did you think it was a little strange that she walked down the aisle to 2 cellists playing Michael Jackson's "Human Nature"?  Strange.  Just strange.
Email ThisBlogThis!Share to TwitterShare to FacebookShare to Pinterest
Labels: Wednesday Hodgepodge