Yes, I'm still alive! I'm just trying to get back in the swing of school.  Last week was a really busy one: I had something every night except for Friday, and Tues. & Thurs. I didn't get home until 8:00-9:00.  Not fun when you leave the house at 6:30 a.m.
I'm waaaay behind on blogging, and reading blogs, so if you're still with me, thank you! I promise to try to get to everybody very soon!
CH & I took it easy on Friday night. Sat. morning, we threw some stuff in our trailer and headed to Asheville. OS moved to that area a couple of weeks ago, and we needed to take him an old loveseat that we had, along with some spare kitchen essentials. We were pleasantly surprised at his new house: It's actually quite nice. He has woods on the side and to the back so they feel like they have a little bit of privacy.
After we dropped stuff off at the house, we drove out to the campground and set up.  Then OS showed us around a little bit, and we went into downtown Asheville. We saw some pretty interesting people:

This is a roaming bar that the patrons pedal. Interesting. They were having a very good time!
We ate at Wicked Weed: 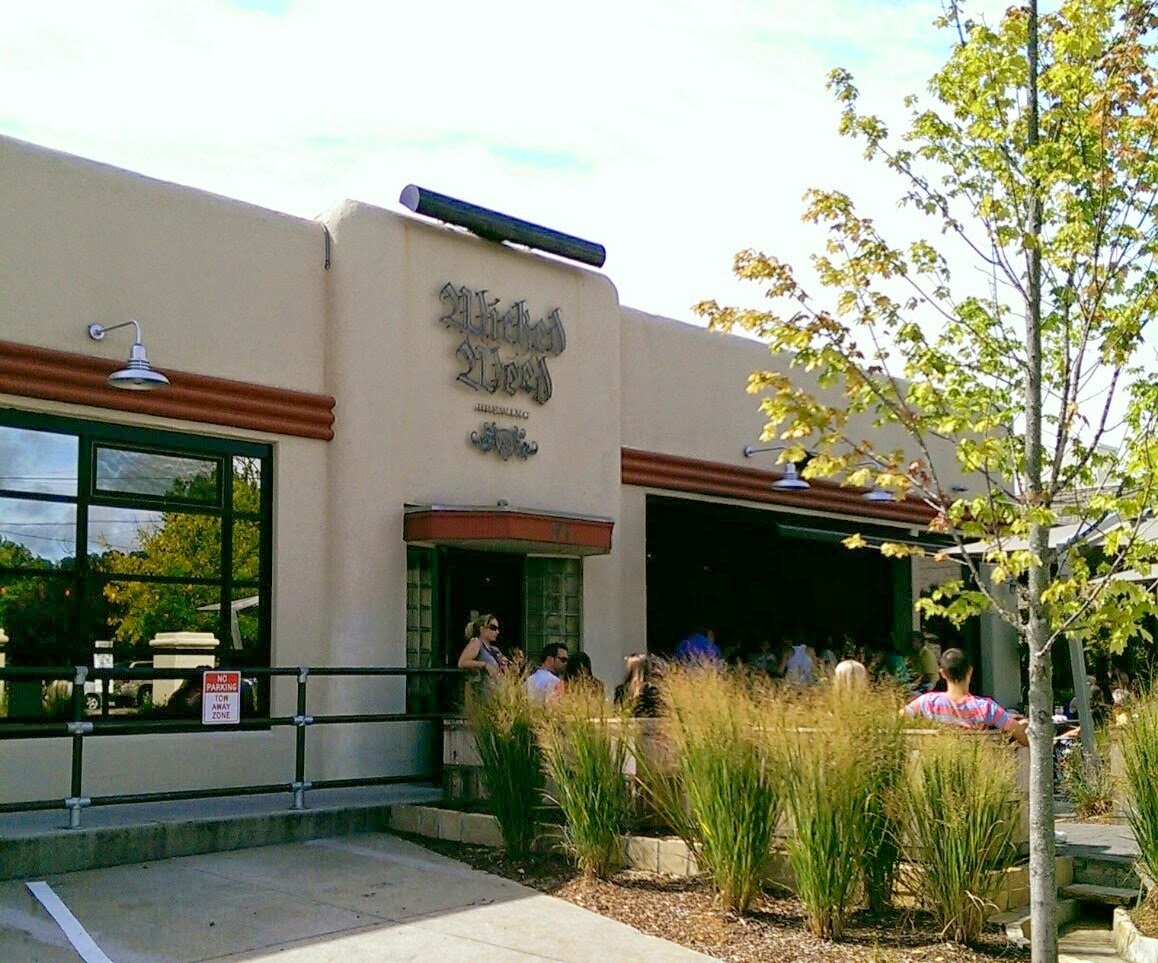 If you walk around the back, you can take your dog with you. The wait staff was extremely friendly, and just about everybody wanted to pet Laika & Sultie (OS' dog). 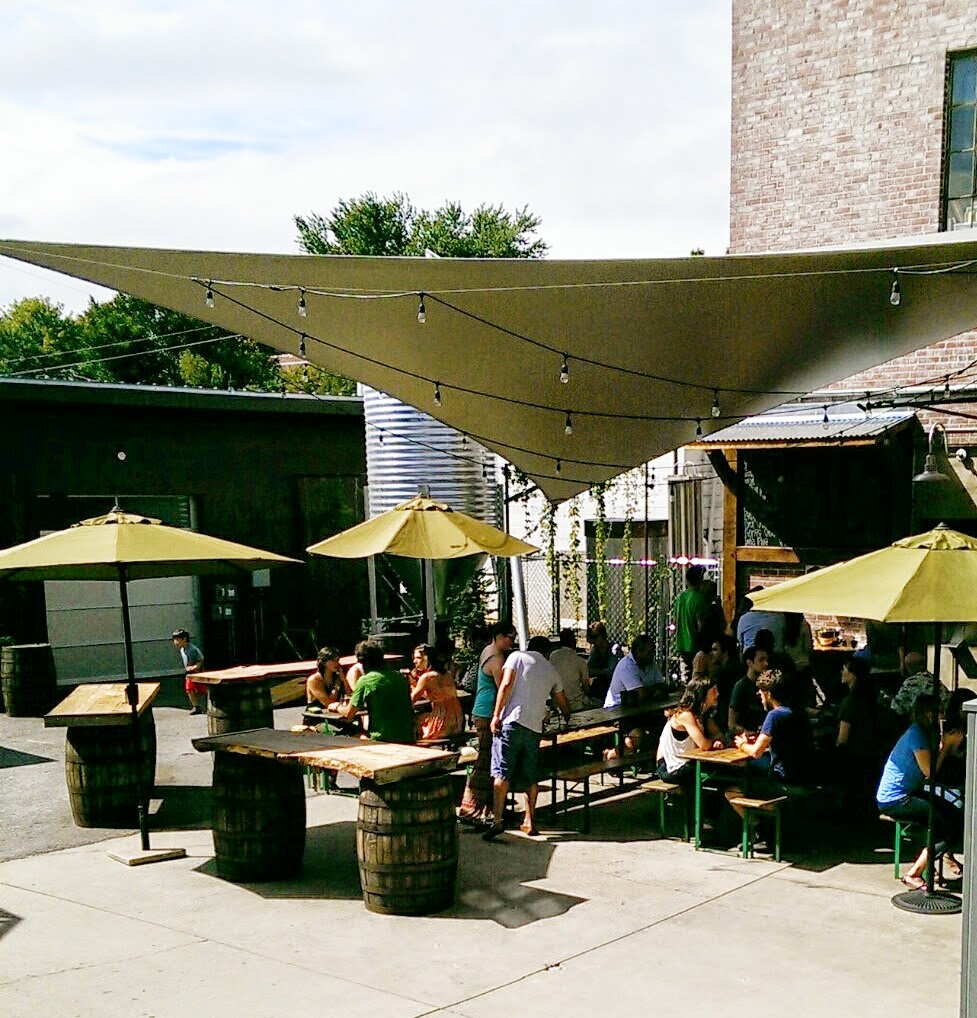 The wait staff brought the dogs some water as soon as we sat down. They didn't have a very big menu, but we were just there for burgers, anyway.  OS had a black bean burger that had firewalker pimento cheese & pickled green beans.  I had a taste, and it really wasn't half bad!
Since it is a brewery, they make their own beer right on the premises. Again, it wasn't bad at all!  I had the Apple Harvest Ale, which is a Belgian blond ale with apple cider that is made locally.
After we ate, we ran into the grocery store to get something to grill for dinner.  OS joined us for steak, corn on the cob, and potato salad. 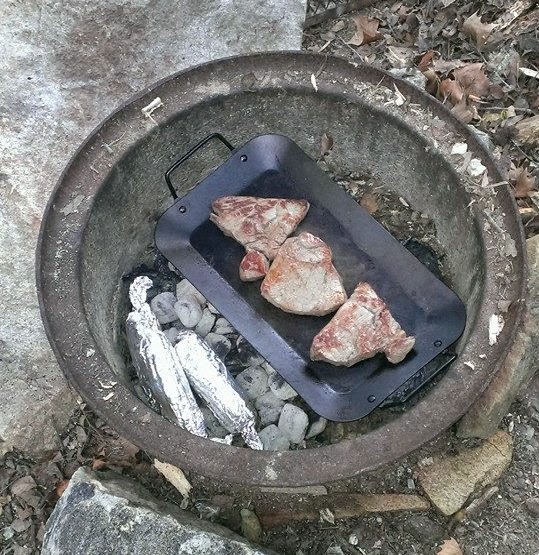 We really ate very well on Saturday! Our campsite was right on the river:

I didn't zoom in with that picture.  I sat in my chair and took the picture. It was pretty calming to hear the river. There were a lot of ducks just to the left of the little island, but they stayed in the water & didn't come up to the campsite.
Sunday morning we got up, packed up, and headed home. OS had plans to kayak, so we didn't see him. On the way home, we saw this: 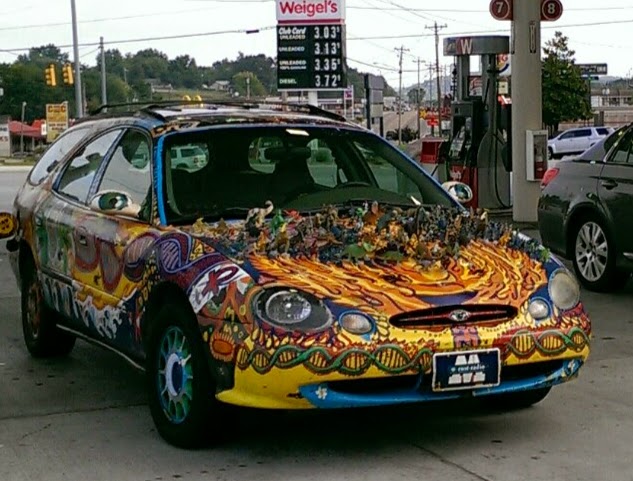 Just in case you can't see it, those are dinosaurs on the hood. The owner was nice enough to allow me to take a picture, and he laughed about it. Seems he has a good sense of humor!
After we got home, we cleaned out the trailer and then reorganized it so we won't have to do it for Fall Break. 20 more days!
I still have to catch y'all up on Sisters' Weekend, which was last weekend. What a blast!
Hope everyone had a nice, relaxing, fun-filled weekend!