Yes, you read the title correctly. I was so busy last week, that I can't just do a "Weekend Wrap-up"!
Last Sunday marked the end of an era for me. I decided (after much thinking on my part) to stop playing in the flute choir. There were quite a few factors that came into play for my decision: I want to start playing for Mass, and I can't do both since both groups practice on Thursday. The "snarkiness" of one of the members also played into the decision. I tried to get past it, but when you get to the point where you dread going to something you pay money for, it's time to leave. 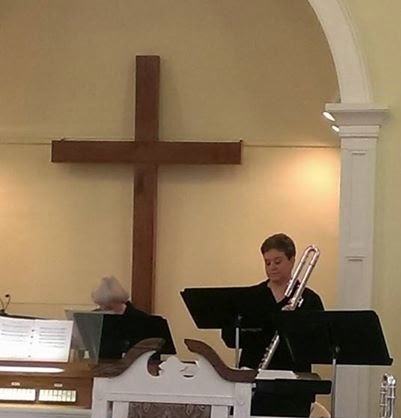 I'm going to miss that bass flute, though! They have a former member coming back, and she plays a mean bass, so I didn't feel quite so guilty knowing she would be stepping in.

Wednesday, I got to go to my first ever ASHA  Convention! ASHA is the national organization for Speech/Language Pathologists & Audiologists. I had the best time! I met some speech bloggers, and was a bit star-struck!

A co-worker and I presented a Poster Session. It went amazingly well! We had a lot of people stop, read, and ask questions. I was amazed at the positive response we received. We're seriously thinking about expanding the topic into a talk for the school's convention for summer, 2016.

It was a 2-day whirlwind of being updated on the latest materials & techniques. We took time out for a little fun on Friday night. We went to Minus 5, which is an ice bar. It was a bit pricy, but I figured that would be the only time I ever went to something like that, so it was worth it! The whole room was incredible. To see our pictures, click HERE. Our pictures are #28-31. After that, we had dinner (& finally found Stella!), then walked back to the Convention Center, took the shuttle back to the hotel, packed, and crashed.

Sunday afternoon was the community band's fall concert. There were a couple of spots where I really thought the piece was going to fall apart (not the flutes' fault), but they managed to keep it together. After the concert, all but 3 of the flutes took a couple of pictures:

Guess who insisted on a funny picture? (See below)

I've had a good time with this group this semester. As you can see, the band consists of musicians of all ages...from college to senior.
I have another short week this week: only 2 days of school and then Thanksgiving Break! If you work outside the home, what's your schedule like for this week?