The Deal with Friday Fragments 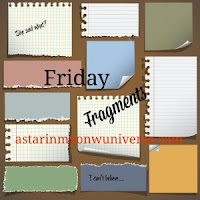 I'm linking up with Traci at A Star in my Own Universe for Friday Fragments.

* You know what stresses me out? Those comment verification "I'm not a robot" thingies. You know the ones: the ones where you have to click on all of the pictures that have a certain picture. What if I think there are mountains in the background? Am I supposed to click on that? There are 6 pictures and they aren't very big, so what if what I see isn't really what it is? Who came up with this idea, anyway???

* I love Will & Jada (as in Smith), I really, really do. But...when I saw her speech about the Oscars, I thought "she's asking people to segregate themselves." Then, a family member basically said the same thing. She said something to the effect that MLK, Jr. wanted everyone to be treated the same, regardless of their color. As she said, maybe their performance wasn't up to par. I don't know that much about the Oscars, and I certainly don't take much stock in it.

* Speaking of big deals: Why is it such a big deal that a former VP candidate is endorsing a certain person who is running to be a candidate for President? I just don't get it.

* What is the deal with school superintendents "stepping down" and getting a buy-out? A near-by superintendent is  stepping down resigning (let's call it what it is) at the end of the year, and he's going to get paid. Seriously? If someone wants to pay me that kind of money, I'd "step down", too. I think he's been offered a job somewhere else...maybe not in education.

* Looks like it's another snow day for me today. Having a 1-day work-week isn't bad! I've got some things on my to-do list today, so I'm glad to have 1 more day to get it done.

* I'm trying to compartmentalize my life. From Bloglovin' to emails, I'm going to try this and see if I can get some organization in my home life. I'll keep you posted on how that goes!

Want to see what little clips other people are fragging about? Click here to visit Traci and link up.
Email ThisBlogThis!Share to TwitterShare to FacebookShare to Pinterest
Labels: friday fragments