{State of the Kitchen} Part 13: A Light...Definitely a Light!

It's almost done...it's really almost done! The utility cabinet, last wall cabinet, and wine cubby were put in on Monday, along with (most of) the trim. I say "most of" because apparently someone didn't measure correctly, or enough pieces weren't ordered. As has been par for the course, something didn't go right.
A piece of trim is missing (in the red circle), so they'll have to come back again. I'm still wondering if they're going to finish fixing the strip in the ceiling (see the arrows).  You can see in the pictures that the boxes laying around are dwindling, so it feels like we're about to have our house back.
The utility cabinet has 3 drawers, but he only put in 2. CH is thinking that the shelf can go up a couple of notches, then the top drawer can be moved up a little, leaving some room for the 3rd drawer to be installed. I don't know why he didn't consult with CH (who worked from home that day so they could finish up) before he put the top drawer in, but he didn't.

The electrician is coming this afternoon to put in the pendant lights, undercabinet lights, and finish the outlets.
The contractor told me that he spoke with the countertop people. They said that the hold up was because I had to decide whether to make the granite behind the range all 1 piece, or have 1 piece behind the range and a piece on either side. I told the lady that I wanted 3 pieces since she said I was asking for a disaster if I had it all 1 piece. She said that it could break easily before they installed it, so I told her 3 pieces. Then, the designer emailed me about the situation, and I told her I wanted 3 pieces. THEN, a couple of days later, someone from Home Depot called and asked me the same thing. So, no. It wasn't my fault...it was poor communication on HD's part. Anyway, they're supposed to call Friday to make an appointment for installation.
The never-ending kitchen reno looks like it's coming to an end. FINALLY.
Oh, but wait. This happened over the weekend: 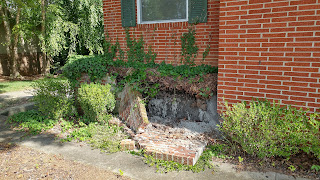 When we bought the house, there was a crack in the wall, so we knew we'd eventually have to have it replaced. Over the past few months, we knew it was about to come down. Last week, I had someone give us an estimate on taking it down and rebuilding it. And then, over the weekend, the wall tumbled down.  The guy came yesterday and took the rest of it down. Now the rebuilding begins! The joys of an older home!
Email ThisBlogThis!Share to TwitterShare to FacebookShare to Pinterest
Labels: kitchen, remodeling, State of the Kitchen