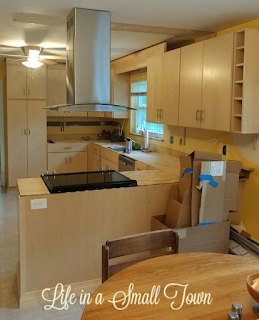 Yep, this is what my kitchen still looks like. The missing piece arrived at my house on Friday, and I promptly texted the contractor to let him know. He said he would check with CG2 to see if he could come out one day next week (which is this week) to finish up. It is now 8:41 on Wednesday night, and I haven't had a text or a cabinet guy.
I called the countertop people on Tuesday to find out when they would be ready to make my appointment. The lady said that I was the next person on their list to call (isn't that a coincidence...yeah, like that's likely), and she made my appointment for Monday afternoon. I texted the contractor to let him know, because they have to come out and remove the temporary sink so the real sink can be installed. It's now 8:43 on Wed. night and I haven't received a text or call.
I forwarded the same text to the contractor (so he would have it again) as well as the Home Depot store manager. Yep, 8:44 pm on Wed. and no response.
I emailed the owner of the contract company, the manager at Home Depot, and the Kitchen Designer (who probably isn't working today) and included a screenshot of the texts from last Friday through today. Which means they are seeing 3 texts: 2 from me & 1 from the contractor saying he would get back with me.
I have a huge concern that the countertop people are going to show up on Monday to install my countertops and won't be able to because of the contract company. Then there's the concern about the strip in the ceiling (which I'm pretty sure we're going to have to fix on our own) and the piece of dishwasher that's missing.
Something has gone very right lately in the way of construction, but it has nothing to do with the kitchen. Last week I posted a picture of the wall that had finally given way and fallen.
I got in touch with a brick mason we know, and he came over fairly quickly to look at it and give us a quote. I had the quote that night, and CH & I discussed whether we wanted another wall put up, or if we just wanted the brick repaired. We decided to go ahead with the wall.
This guy is a very hard worker and wants to make sure he does things correctly. What a breath of fresh air after what we've been through with the kitchen!
I think it looks great, and he said he wasn't quite done yet. He's coming back this morning to finish up and clean up.
This guy has pride in his work, and is extremely professional. Like a said...a breath of fresh air!

Email ThisBlogThis!Share to TwitterShare to FacebookShare to Pinterest
Labels: house, kitchen, remodeling, State of the Kitchen