{State of the Kitchen} Part 11: This is a Short One 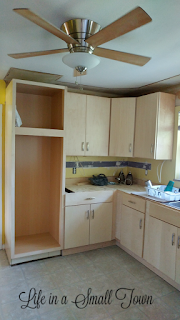 This is going to be a rather short post this week. The only thing that happened is the utility cabinet arriving. It hasn't been installed, but it is in place. I'm not sure where the doors are, but that's not my problem. When the cabinet with the blemish came in, 1 of the doors wasn't smooth. That one was to be replaced, but I don't know what happened to the other 3. Like I said: not my problem.
This cabinet is going to house my microwave and small appliances like the breadmaker, mixer, and slow-cooker. I'm also going to put papertowels in the top.
The door that did come in looks like this:
Can you believe those white lines? How did this pass QC? Maybe they thought that because it's the inside of the door it didn't matter? CH said he knows why the cabinets cost so much...they have to make them 3 times to get them right. Or, in our case, still not get them right. Incredible.
The owner of the contract company and the contractor delivered the utility cabinet on Monday. The owner asked about pendant lights going above the sink, and I showed them to him. I also asked to make sure someone was going to put the blind corner cabinet together and was told CG2 would do it. I didn't say anything about the strip in the ceiling or the electrical outlet for the microwave. I told the designer I was going to let her take care of that.

I started organizing my pantry:
The paper towels won't stay in the pantry so that will give me a little more room in that side. I took one of the shelves out of the right side since I had some tall containers. There's still plenty of room on both sides.

Next week I hope to at least have an appointment for the countertops. It's getting closer to being finished!
Email ThisBlogThis!Share to TwitterShare to FacebookShare to Pinterest
Labels: kitchen, remodeling, State of the Kitchen