For our last full day with the campervan, I knew where we were headed. I love the movie PS I Love You and knew that parts of it were filmed in the Wicklow Mountains. I also wanted to visit Glendalough, a monastic city that St. Kevin founded in the 6th century. I had heard it was "touristy" so in my mind I was imagining something like Gatlinburg, TN, with a lot of shops and restaurants. Boy, was I wrong! 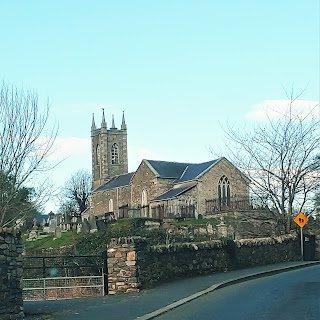 We stopped in Laragh to grab some sandwiches for lunch. While I was in the store, CH talked with a young lady who said she was from Glendalough and gave us advice on free parking. That ended up saving us €15, or so we thought. We ended up paying to go in one of the parking lots so CH could empty our toilet cassette. That's when we were told campervans had to pay that much to go in the lot; we thought it was only €4! Pretty steep jump in price from a car to a campervan! But, the person who told us about the price said that we could spend the night in the lot. We already found a free place so we skipped on staying there.
Our drive to Glendalough was only about 30 minutes so we had plenty of time. We saw daffodils lined up on the side of the road: 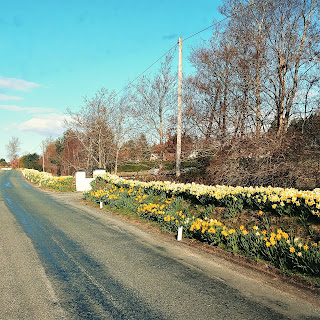 Glendalough was the one place where we encountered tourists. While we were in the monastic city, no less than 3 tour busses came and went. This is exactly why I won't do tours: You get off the bus, walk around, are told what you see, and get right back on the bus. We were able to wander around and take our time. It was such a peaceful place.
Glendalough was founded in the 600s by St. Kevin. The setting is a glacial valley that has 2 lakes (upper and lower). 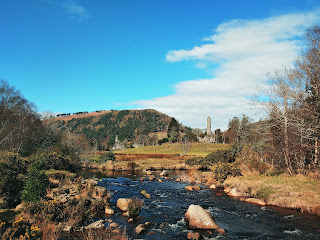 We entered at the side of the city and completely missed the gateway. Looking at pictures of it, it looks impressive. I hate that we missed it! 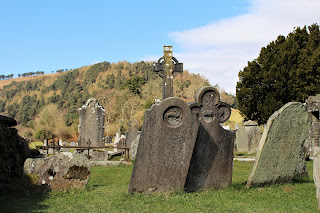 We took a very nice stroll down the path to the Upper Lake. The path was very well maintained; it was quite a nice walk!We opted to walk back to the lower car park using the road. In hindsight, we probably should have taken the other path, but we enjoyed the views just the same.
Even though Glendalough was a touristy place, we only encountered the bus tours and they didn't get in our way too much! There were a couple of school groups at the Upper Lake Area, but they were busy with what looked like team-building activities so we weren't crowded at all.
We drove out of Glendalough and into Wicklow Gap to find a place to park for the night. It was early; only around mid-afternoon so I suggested we find someplace and take it easy for the rest of the afternoon. We found a couple of places on the side of the road, but my fear was that someone would drive around a curve in the dark and run right into us. We found a 24-hour car park but before committing to that, we drove down the road just a bit and ended up finding the lake that was used during the fishing scene in PS I Love You. 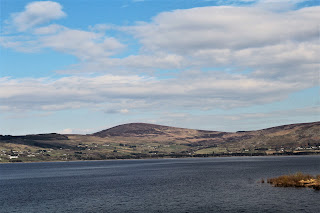 So I can scratch that one off my list! We didn't find anything better than the car park so we drove back. There is a hill (Turlough Hill, to be exact) behind the parking lot so I took advantage and climbed most of it. 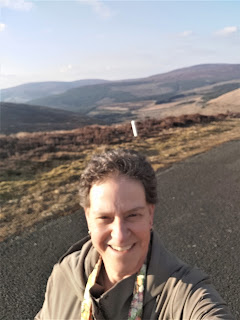 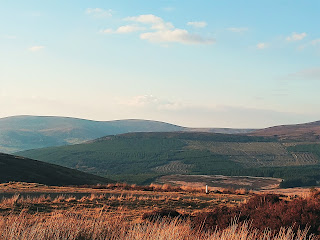 I've said this in other posts, but we were there probably 2 weeks early. I definitely want to go back in the summer or early fall to see the heather in bloom. I can't imagine how gorgeous Wicklow Gap is all dressed in purple!
When we first got to the parking lot there were some guys taking pictures of a really sleek, pretty car. We talked with them for a bit and found out that they were doing some promo pictures for the Polestar all-electric car. This is one of the pictures that was taken while we were there:
The drivers and the photographer were exceptionally nice. We talked a little about England (they were British) and we mentioned how much we enjoyed British tv shows. Then they were on their way to film the cars in action.
That night ended up being the worst night's sleep I had the whole time I was in Ireland. There was a couple with a van who started out the evening at the top of the parking lot but they moved closer to us at some point. That in itself is no big deal, in fact, it would have made me feel a bit safer knowing there was someone closer to us. I didn't know they moved and it must have woken me up; then I heard voices. That was the only place I didn't feel 100% safe, even though it really was.
The next day was "return the van" day...a sad day indeed. We also had to go to the airport for our COVID test so we didn't really have much time for anything else. As it turned out, we were both pretty wiped out by the time we got to the hotel so we just chilled. We had quite the adventure with quite the stories to tell.
Email ThisBlogThis!Share to TwitterShare to FacebookShare to Pinterest
Labels: Ireland; Ireland Adventures; camping