Foto Fridays in the Mountains 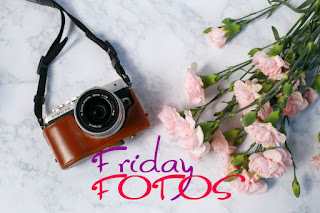 I did a little better with taking pictures this week:
During one of my early morning walks, I came upon the duck couple resting right next to the sidewalk. Gurl Dogg wasn't with me so they allowed me to get this close to them: 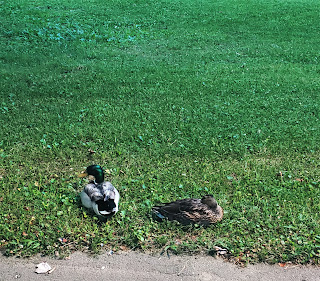 I tried not to linger because I didn't want to disturb the female's beauty sleep! Using shovels as flag poles, Old Glory was being shown at the pavilion in the park where I walk. There are some men who work out a little later than when I walk. I'm not sure if this was placed by them or if it was other guys. 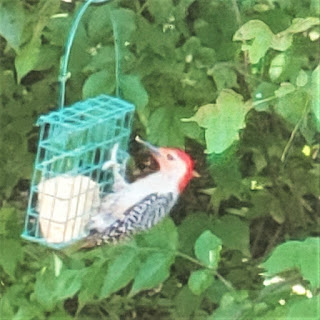 This isn't the clearest picture since there is a screen on my window. I switched to suet feeders hoping it would deter the squirrels. It does to some extent, but they have figured out how to get a little snack between bars. The red-bellied woodpecker is just beautiful. The head is so vibrant, it really gets your attention!
CH wanted to go for a ride in the mountains on Sunday but I was able to hold him off until Monday by telling him it would be less crowded on Monday. We went to my happy place: Cades Cove. 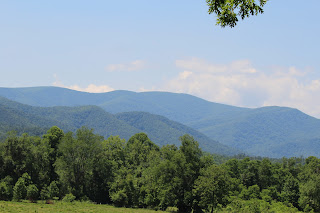 As for it being less crowded, I think it was although we ran into a "bear jam" on Loop Road. Someone saw a bear so of course, people had to stop (and probably get out of their car to get close which is the most stupid thing you can do). We sat for about an hour, which is the longest I think I've ever sat in a bear jam. As we entered Loop Road we saw this guy struttin' his stuff for the ladies: 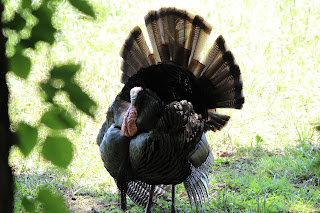 Because of the bear jam, we ditched the original plan of taking a road that is halfway through Loop Road and took a road that cuts through to the other side. Then we took another cut-through to go to CH's favorite lunch spot. There's a stream so I took advantage of it and did something I haven't done in a long time: 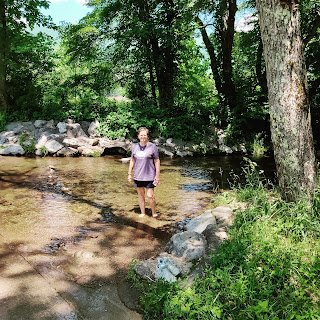 We saw a lot of these little frogs hopping around the stream: 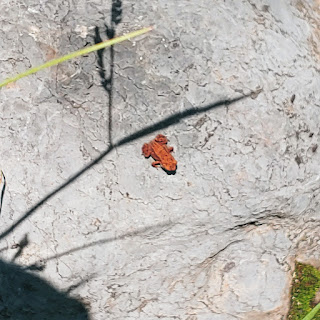 As we were leaving Loop Road we saw people stopped on the side of the road (and out of their car) to get a better look at this: 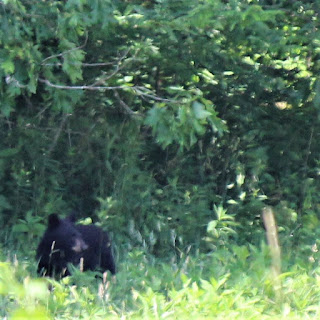 CH spoke with someone who said that there was a mama bear with her 2 babies in the field. She shooed the babies into the tree and then went after some kids who got too close. The stupidity of some people just makes me shake my head. There are reminders on the road to help them out: 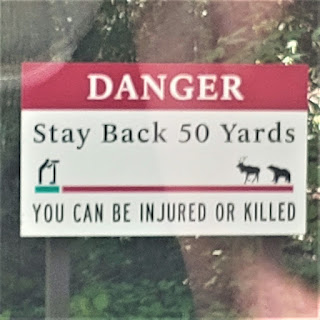 The sad thing is that because of the stupidity of some people when a bear attacks that bear is caught & put down. So, thanks, stupid people.
Another picture from an early morning walk: 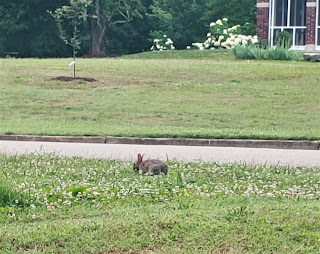 The morning before I saw 5 bunnies in a different part of the park. Two of them were playing around, chasing each other & I got to see one of them actually jump over the other one, then hop over to their mama who was munching on clover nearby.
That's my week in a nutshell. Morning walks, a drive in the mountains, and watching the birds. Sure signs that I'm getting old!
Email ThisBlogThis!Share to TwitterShare to FacebookShare to Pinterest
Labels: birds, Foto Friday, Smoky Mountains