Wow!  I can't believe it's already my 100th post!  Apparently, when you hit 100, you are suppose to do a list of 100 things about yourself.  You can find mine here if you really want to read it.
When I started my blog in February, I wasn't too sure about writing one.  I thought my life was pretty boring; I knew it wasn't nearly as exciting as someone else's I  started reading when her hubs posted her link.  One thing that I've learned in just the few months I've been blogging is that my life isn't as boring as I thought.  I'm enjoying writing and sharing parts of my life.

Okay, remember Linda's on vacation from the Random Dozen.  I'm being totally random with just a half-dozen things that have happened over the past week.

1.  Husband & I thought this past Sunday was Father's Day.  He found something he wanted: 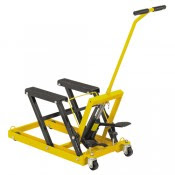 And, it was on sale + he had a 20% off coupon.  (Auburnchick....you're rubbing off on us!)  Apparently this will help him with working on his motorcycles.  (yes,  that is plural)  So, I went to a part of the big city that I'm not familiar  with (but it was  incredibly easy to find) and picked it up.  For Father's Day.  Which we thought was on the 6th.  But it's not.  It's on the 20th, in case you're wondering.

2.  I know you can't believe I'm going on and on and on  you're not tired of hearing about my plants, so look at this:

Can you see the new growth on the plant?  I haven't killed anything yet!  In fact, they're actually growing!  My sister, the master gardener, came by on Sunday, and I showed off my plants.  She knows me so well;  she was very excited for me!

3.  Check out the amaryllis blooming in our front yard (completely husband's doing):

And, the plant on my front porch: 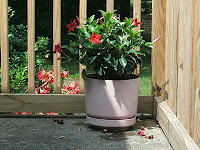 4.  Walking around the yard, I found this nest in the crook of the gutter: 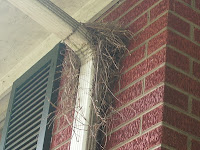 But then I found this one, too: 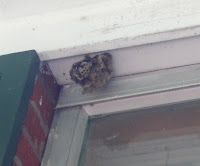 I wish I had seen the gutter nest earlier;  I would have liked to have kept an eye on the babies.

5.  Husband bought this for us over the weekend: 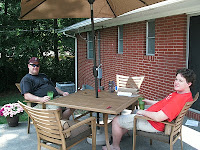 Not only is YS a blog hog, but  husband is becoming quite the blog hog as well.  He's been asking every day if I'd blogged about the table & chairs, and why I haven't  yet.  He threatened to take them back.  Hey, if blogging gets me stuff, I'll blog all day long!

6.  Another tough decision this week on the tv:  Kate Plus 8 or The Next Food Network Star.  Let me say:  Kate grates on my nerves.  The way she talks and over-enunciates everything, the way she used to talk  to Jon, and the way she talks to the kids at times.  The kids are just too dad-gum cute.  The little ones, anyway.  The twins are cute, but one of them badly needs an attitude adjustment.  But,  I'm sure that's one of the  drawbacks of having your life video-taped:  you have to be especially careful with how you discipline your child, or else you'll have Dept. of Children's Services on your butt.  The Next Food Network Star:  I didn't care for the winner of last year's show.  I knew I would never watch her show, and I haven't.  I have been watching since the first season, and I think it's  one of the best "reality" shows out there.  That Bobby Flay is just too cute.  So, The Next Food Network Star won out on Sunday.  I felt really sorry for Aarti & Das,  who didn't have time to cook their chicken all the way through, but I wondered if someone would tell the judges before they bit into it.  I also felt bad for Alexis:  his Beignets weren't cooked all the way through, and he received some harsh criticism from Wolfgang Puck.  I mean, if a world-class chef says that his wife would divorce him if he served that to her, that's gotta be bad.  So long, Alexis!
Email ThisBlogThis!Share to TwitterShare to FacebookShare to Pinterest
Labels: flowers, Husband, NFNS, plants, youngest son