*I have to start with this: 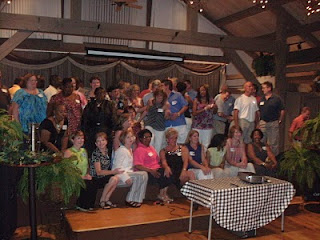 I attended my 30th class reunion on Saturday night.  We had a good turnout:  a little over half of the class was there!  It was absolutely wonderful to see a lot of people I haven't seen since we graduated.  Even our FES (Foreign Exchange Student) from Sri Lanka came; he's living in Canada now, but he made it down!  Here's a picture of me & a childhood friend:

I've known her ever since I can remember.  Her family lived up the street from us, and we were always back and forth between houses when we were little.  We fought like sisters, but always managed to make up.  We went to parochial school together in 1st grade and then started public school together.  I think I kind of tagged along with her at first; she was a lot more "worldly" than I.  I had stayed at home with my mom until 1st grade; both of her parents worked, and she went to Kindergarten, so she knew how to survive alone!  Toward the end of elementary school, we started to go our separate ways.  It was so good to see her again!  We picked up right where we left off!

* Husband had a nice, quiet Father's Day yesterday.  We watched some World Cup, saw a movie, and then went out to dinner.  He had already gotten his present 2 weeks ago (remember we thought the 6th was Father's day?), but he did get a phone call from Oldest Son.

* We saw "The A-Team" yesterday.  Being in a house with all boys, I have to bear through am lucky enough to have the opportunity to see a lot of action movies.  Some I like, some...not so much.  In the early days of our marriage, Husband and I were big fans of the A-Team when it was on tv.  We liked it so much that we named one of our dogs Murdock, for the crazy character who was the pilot.  (Murdock the dog went to live with my sister.  We lived in an apartment and he was chewing everything up.  He lived a happy life with her and her family and was very much loved.)  I really enjoyed the movie...there was action, but there were a lot of funny lines.  I loved Liam Neeson as Hannibal, and Bradley Cooper as Face.  Quinton "Rampage" Jackson as "BA" was a very nice replacement for Mr. T; he's a much better actor, for sure!  And, Murdock:  Sharlto Copley.  There were times when he was on screen I could've sworn he was the original actor, Dwight Schultz.  No nudity, some cussing, but it wasn't every other word, and it wasn't put in just for the sake of doing it.  A lot of things blowing up, a lot of action...perfect Father's Day movie!

*  Army Wives:  I could've sworn when I watched it on 23 May they said it was the season finale.  (Guess it's kind of like the Father's Day mix up, huh?!)  But, I realized yesterday that they are still running new shows.  Thank goodness for all of the episodes being online! I got caught up and watched the new episode last night.  I watched "The Next Food Network Star" (Bye-Bye Dzintra...in my opinion you were there a week too long!)and played "Catch-up" with Army Wives during the commercials.   Then, when the "real" episode came on, I watched it, while watching last week's episode during commercials.  And now I'm all caught up!  WHEW!

All in all, we had a pretty relaxing weekend.  I'm looking forward to a wonderful week!
Email ThisBlogThis!Share to TwitterShare to FacebookShare to Pinterest
Labels: father's day, friends, Husband, movies, OS, reunion, trash tv