To see what everybody else has been up to this week, visit Mrs. 4444 and click on the links.

* It's my last week of "freedom".  Back to the coal mines on Monday for a week of Professional Development before the kids go back on the 2nd.

* I got an e-mail from Ms. Principal yesterday.  Because I tried to be a smart aleck and not put my name on the evaluation after the reading conference, I was on a list to not get credit for that day.  Hold the phone:  I have a certificate.  Guess I'll have to spend part of my day today getting that cleared up.

* CH is doing well after his semi-emergency gall bladder surgery.  He was able to eat yesterday; bland things, but food just the same.

* I saw on the news the other day that a bear who had a plastic food container stuck on his head for weeks was finally found and tranquilized.  When the container was taken off, the bear weighed 115 pounds as opposed to the 200 that it should have weighed.  There had been some sightings of him beginning on 28 June.  It's amazing that he was still alive!

* I spent Saturday at church listening to Dr. Scott Hahn speak. He is an ordained Presbyterian Minister who is a convert to Catholicism.  He talked about his conversion and about how to defend our faith.  He struck me as being very intellectual, but still very personable.  He was incredible!

* We had some overnight guest Saturday.  They were on their way to the BMW National Rally, which CH was suppose to go to.  Anyway, the guests didn't leave until around noon on Sunday, which meant that I missed early and late mass.  No problem; the university close by has a Catholic Center with a 5:00 p.m. mass.  I'm really glad that I thought to check out the summer schedule, because they don't have a 5:00 mass; it's an 8:00 p.m. Mass.  I have to admit, it was kind of nice.  There weren't a whole lot of people there, and, because I didn't realize there wouldn't be very many people there, I ended up having a front row seat, even though I sat in the 3rd row.

*  I snapped this picture of MS & YS after CH & I got home from the hospital: 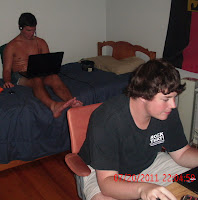 No, we're not geeks at our house at all!
Email ThisBlogThis!Share to TwitterShare to FacebookShare to Pinterest
Labels: friday fragments