Monday morning, we had a very strange thunderstorm.  The storm was coming from the north-east; usually storms come from the south-west.  I woke up a little after 5:00 to "popping" sounds on the roof.  If you know anything about me, you know that my imagination can really run rampant.  When I heard that noise, the first thing that came to mind was our babysitter (when the boys were little) telling me that when her house caught on fire, she heard a large "pop".  I was a little concerned Monday morning.
I got up and went into our "spare" bedroom/office, and looked outside.  MS has a makeshift soccer goal that is leaning up against the house, close to where I heard the popping.  When I looked out, I saw that the wind was blowing pretty hard.  I thought maybe the wind could have been pushing the goal against the house.  I went ahead and took the girls out, and checked on the goal while I was out.  No way was that what was making that sound.  The wind was really blowing; I felt like I was Dorothy out there.  As I was standing at the side of the house, I heard the "pop", and figured out what the culprit was: 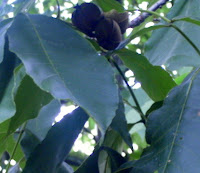 Apparently we have a hickory tree to the side of the house that we've never realized was there.  We have one in the front yard, right in front of the living room window, but have never noticed the one on the side.  In 7 years, this is the first time we've heard the nuts falling off and hitting the roof.

After I solved that mystery, I turned to walk back into the house.  When I looked off in the distance, I saw this big, black sky with lightening coming out of it.  It didn't look good at all.  I gathered the girls up, went back inside, and proceeded to wake up CH and tell him that it looked like a big tornado was headed our way.  As weird as the weather has been this year, it really wasn't outside of the realm of possibility.  That was my reasoning, anyway.  CH got up and looked outside, then we turned on the tv to check the weather.  My favorite meteorologist said we were getting to have a severe thunderstorm.  The storm came and went, there wasn't a tornado, and I've heard the popping sound every now and then.  Only now I know what it is.
Email ThisBlogThis!Share to TwitterShare to FacebookShare to Pinterest
Labels: storms