Last weekend was quite the "free weekend" for me.  It started on Friday, when I received a card in the mail from Starbucks.  I had earned enough "stars" for a free drink!  YAY!!!
Saturday morning, YS & I ventured into the  big city to go to a music store.  This store has been in the big city for what seems like forever.  They are the ones who go around to the schools and bring supplies to the band kids/band director, rent instruments, and fix what is broken.  I went in to find some music that would help me bring back my flute technique, and also to buy a polishing cloth.  There were a couple of places on my flute (my, that sounds nice!) that were tarnished.  I was keeping my fingers crossed that a quick polish would do the trick; I really didn't want to pay for major polishing.  The employees there are absolutely wonderful.  One of them is one of the "Big Orange Banditos":  an ensemble sponsored by a radio station that will visit someone first thing in the morning (on a Friday before a UT football game) and given them a "Wake up call" (Rocky Top).  Here's an example (you only have to watch the first minute to get a good idea of what this is about):

Of course this is put on the radio for everybody to hear!  They have waken up the likes of Pat Summit, Bruce Pearl (former UT Men's Basketball coach) and David Keith (actor from "An Officer and a Gentleman").
What was my post about???  Oh, yeah!  So, anyway, I went into the music store and told him what I was looking for.  Not only did he get the cloth for me, he and another employee shined my flute for me!  The tarnished spots came right off.  He helped me find the music I needed, and, $99 later, we were out the door.  The free part in that $99 was the polishing, and they didn't charge me for the cloth.  YS said he didn't need anything when we were driving over, but then he decided he needed a metronome/tuner, and a cleaning kit for his baritone.  That was the bulk of the charge.  He did remind me that he hasn't cost us nearly what his brothers have.
Sunday I went into Starbucks after Mass ('cause if you go to Mass, you get a reward!) to get my free drink.  As the manager gave me my drink, she asked me if I was the one who like the gingerbread lattes.  Oh, yeah; you bet I am!  She pointed to the shelf and told me to take one of these: 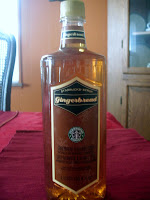 There were only 3 left, so I guess she just wanted to get rid of them!  After I told her how much I loved her, I walked out the door with my free drink and free gingerbread syrup.  She's just the best manager EVER!
And no, I'm not too proud to be given free stuff!
Email ThisBlogThis!Share to TwitterShare to FacebookShare to Pinterest
Labels: flute, starbucks