Yesterday, I got to spend some time with one of my sisters.  We went to see a play:

What luck that I found out that a group was putting it on a couple of weeks after I finished reading "Anne of Green Gables"!!!  My sister hadn't read it, but at the beginning of the play they did a recap of sorts.  It was enough for her to get the background, anyway.  They did a good job:  the girl who played Anne had most of the lines:  I'm amazed at the job she did.  Of course, I don't know if she had cue cards in the back.  If she did, she did a really good job of disguising it!  One of the little boys was a little hard to hear, but he didn't have many lines, so it didn't affect the rest of the play.

We had a good laugh on the way back to the Small Town:  When we had to get back onto the interstate, with both of us being "directionally-challenged", we didn't know which way to get back on!  On the way to the play, when we got off of the interstate, I misunderstood her directions, so I took a wrong turn and had to turn around.  (She was reading the directions.), thus our confusion as to how to get back on the interstate.  Funny thing about how I figure out whether to go east or west when getting on the road:  I have to picture the state of Tn. to decide which way I need to go.  If you don't know anything/much about Tn.:  there are 3 very distinct parts:  West, Middle, and heaven  East.  When I took Tn. History in school, there was a map of Tn. divided into the 3 parts.  Sooo, I have to get that picture in my mind when I decide which way to go on the interstate.  Apparently my sister does too, but we didn't get the picture in our minds fast enough!  No biggie; this was an area of the big city that I was familiar with, so we just took a different way to get back on the interstate that leads back to the Small Town.  We had a good laugh about it!

And, we realized we had something in common.  This sister's young adult life was very different than mine. Well, hers just took a different route than mine did.   She's a biiiig numbers' person...numbers don't mean a thing to me, and it absolutely floored her when I told her that. She's always been so responsible whereas I feel like I was pretty immature as a young adult.

When she walked into my front door, she took a look at Ally (my schnauzer) and said that she didn't know "that one".  She was really surprised when I told her it was Ally.  See why? 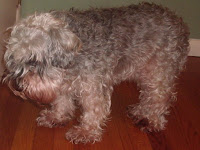 Yeah, she's got the "miniature sheepdog" look going on right now.  A visit to the "Beauty Parlor" is on the calendar for this week!
Email ThisBlogThis!Share to TwitterShare to FacebookShare to Pinterest
Labels: dogs, sisters