~ I had good, no, GREAT intentions of blogging every day this week.  I also had good intentions of getting caught up with everybody in the blogworld.  But, instead, I was L-A-Z-Y this week.  Honestly, I had a real hard time getting out of bed this week.  I don't know what it is, but I'm just soooo tired.

~  Ally did get to the groomer yesterday.  Here's a picture to prove she really is a schnauzer and not a miniature sheepdog: 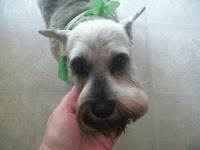 ~  So, what did I do this week?  I finished the 2nd book in The Hunger Games Trilogy (and started the 3rd book).  I let my feelings known on a retail development near our house at a neighborhood meeting the Small Town had. (I know it won't change anything, but they know how I feel, along with most of the people at the meeting.)  I painted the kitchen area...except for around the countertops since we're going to tile that area.  I made it to daily mass on Wednesday 'cause that was the day Pepper got me up in time.  I even made it to Curves a couple of times this week.  As for the rest of time...I have NO CLUE what I did.  I didn't watch any movies, didn't watch much tv, didn't do any yard work (even though it was beautiful this week!), did no cooking (since CH was in DC this week for work), and did very little cleaning.  I sure could use another week off to get those things done!
~  I met some friends for trivia Wed. night.  We had a good time, and did pretty well.  The questions seemed fairly easy this time, but we still ended up with no points at the end of the night.  We "go big or go home" for the last question, which is "Jeopardy-style":  you decide how many points to wager.  Even if we had gotten the last question right, we still would've lost by 50 points.
~ The big excitement around here is that Peyton Manning visited the Titans.  Honestly, if they would sign him, it would do amazing things for the franchise.  He seems like such a good guy, and Tennesseans love him  (well, most do, anyway!).  Not a whole lot of people around here (that I know of) care for the Titans, so now's the chance to get the state behind the franchise!
~ I've given up on snow for this year, and decided I'd better embrace Spring.  Time to change the banner and the background!
Email ThisBlogThis!Share to TwitterShare to FacebookShare to Pinterest
Labels: friday fragments