Yesterday wasn't bad....not bad at all!  I had no choice but to jump in with both feet since I start off my Mondays and Wednesdays at 7 45 with a group of 3 first grade boys.  But then I get to breathe for 45 minutes until my next student comes in.  After that (on Mondays), the day goes by really fast since it's pretty much back to back groups until 3:00 (with a couple of 30 minute breaks in between!).  It was pretty crazy yesterday since I've had a couple of transfer students at my schools.  It would be so much easier if every state and school system did things like we do!

I planned on swinging by the mall and then Curves (which is right next to the mall) after Adoration, but the Church is so close to my house, and the mall is in our twin city on the other side of town.  So, I opted to just call it a day and try to get out there after school today.  I bought the cutest dress at the mall, but when I got it home and put it on, I decided it was just a bit too big in the chest area.   **sigh**  At least it wasn't too little!

Last Saturday one of my sisters (the one who gives me stuff) and I went into the big city for the Women Today Expo.  This year's theme was breast cancer.  It was fun going to all of the different exhibits, talking to the venders, and doing a bit of shopping.  My sister even got her mammogram done while we were there!  We went in and got these neatest little things:  BraVage.  I haven't tried mine out yet:  I want to wait until I wear them for a day at home.  (Can't have the girls falling out  and flopping around at work!)  If you'll remember, last year I made my sister stand in line with me so I could get this:

Gretchen from "Real Housewives of Orange County"
And ended up getting this as a bonus:

Slade (Gretchen's boyfriend)
This year, Guliana Rancic was there, but she was there on Sunday and we went on Saturday.  She seems like such a delightful person, but we were there on the wrong day.
As we were going through the booths, we hopped on a machine that wiggles your fat away.  It looks like a treadmill; you stand on it and it jiggles.  It's suppose to help your circulation while your fat jiggles off.  And only for $600 and up.  We also found a bar, and decided they should've had that one up front...there's no telling what we would've bought if we had found that first!  I'm not sure why they had both of them tucked away in the back.  We did see Claire Robinson , but we don't know who she is, so we just kept walking!   My sister even bought me a birthday present from the Jewelry TV booth (another charm for my bracelet!): 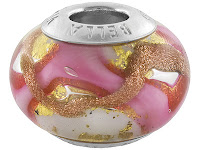 I'm thinking we need to make this a yearly event!
Email ThisBlogThis!Share to TwitterShare to FacebookShare to Pinterest