~  After the door debacle, I did some looking online and found out how to "fix" it.  What did we do before internet? Here's a before & after: 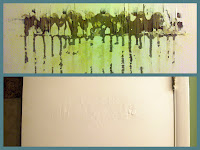 Not perfect, but with the towels, you can't tell: 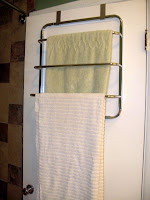 ~  Then, I decided to tackle a bookshelf that we got, oh, about 20 years ago that had never been stained: 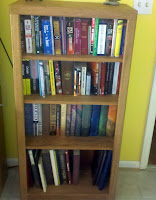 Geez, if I had known how easy it was, I would've done it YEARS ago.

~  After lugging the bookcase up & down the stairs to the basement, then rearranging some furniture just to rearrange it back (because I didn't like the way it looked), I noticed a nagging in my back that was very much like the pain I had the day before my sciatica attack. Off to the chiropractor!  My back was fine the next day.

~  Probably not a great idea to watch a lot of HGTV when I have a week to myself!

~  The exciting news around here: 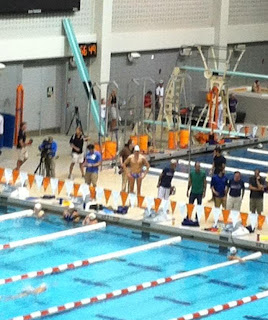 You can't tell who the guy with the swim cap is, but...it's Michael Phelps!  The USA Swim Team is in the big city practicing at the university.  The first lucky 1200 people got to go in and watch practice yesterday, and my SIL & their 3 kids were 4 of them!  (Shout out to my SIL who allowed me to use her picture!) There is a "local" (meaning area around big city) on the men's and women's team.  The guy on the men's team originally didn't think he made the team...in fact, he was in Charlotte on the way home when he found out that Phelps decided not to swim in one of the races, which meant he was in!  Talk about a rollercoaster of emotions!

~  I just had to laugh about an area boy winning gold in gymnastics during the Jr. Olympics.  In his interview, he said that his inspiration for wanting the gold was the promise of a pig.  I'm sure his parents didn't think he had much of a chance, and promised him a "teacup pig" if he brought home the gold.  I can't make this stuff up, folks!

Have a good weekend!
Email ThisBlogThis!Share to TwitterShare to FacebookShare to Pinterest
Labels: friday fragments