1. The Summer Olympics officially begin this Friday night...will you be watching? If you could see just one event in person which one would you pick?

I LOVE the Olympics!  For this one, I think I would pick swimming.  There are a couple of locals who made the teams.  Davis Tarwater went to high school in the big city; he originally didn't make the team, but Phelps decided that he didn't want to swim in a relay, so Tarwater got in.  It's a great story:  he was back in Charlotte when he got the call that he made it.
The other local is Claire Donahue.  She's from another small town in the next county over.

3. July 25th is 'officially' Threading the Needle Day...can you sew? On a scale of 1-10 with 1 being not at all and 10 being Betsy Ross-like, how would you rate your skill with a needle and thread?
Being the 6th girl (and the baby girl) in the family, I learned how to sew but it wasn't a necessity like it was with my older sisters.  I tell them that mom lost all her patience on them, so she didn't have any with me.  I can sew on a button and make minor repairs, but that's it, so I'd give myself a 2.

4. 'Threading the Needle' can also mean to walk a fine line between two things or issues (think awkward social situation). When was the last time you had to 'thread the needle', figuratively speaking?
I'm having a hard time with this one...and coming up with a whole lot of nothing.

5. Kidney, pinto, black, or navy...your favorite bean?
I don't like any of them just to eat.  For New Year's, I'll make pinto beans for luck, but will put them in Hoppin' John so I'm not eating them straight up.  I like kidney beans and black beans in other dishes.

6. Have you ever hosted a garage sale? Was it more success or bust?
When we moved from SC, we moved ourselves, so we sold a lot of stuff.  I think it was a success, but CH wasn't with me and I think he thought that I didn't ask enough for things.  Everything was sold, though!

7. What makes you roll your eyes?
CH's corny jokes.  Or, when he makes the same comment as he hands his id to the cashier. (something like, "the guy I got this from looks just like me")

8. Insert your own random thought here.
I took this picture last week when I thought we were about to get a storm: 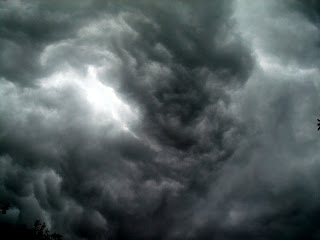 I posted it on google+, and my brother said that it looked like an angry gorilla with white foam coming out of his mouth.  Can you see it?  (you may have to click on the picture so you can see a bigger view)  We ended up not even getting a drop.
Email ThisBlogThis!Share to TwitterShare to FacebookShare to Pinterest
Labels: family, Wednesday Hodgepodge