1. The Summer Olympics begin next week and London is playing host. If you had the chance to go in person which (non-Olympic) London site would you most like to visit?
Have I mentioned that CH & I visited London last October?  And we loved it?  And we want to go back?  We hit most of the major landmarks, but we didn't get to actually go into Westminster Abbey, so I would pick that one.  And, I think we missed a few pubs, too!

2. What is something in your life right now that feels like an Olympic event?
The past couple of weeks, it's been taking care of Laika.  It's hard work to keep that big puppy out of trouble!

3. What's your favorite supper to prepare and serve when it's too hot to cook.
#1:  Going to a local restaurant that has "brewery" at the end of it's name!
#2:  If we're going to stay home, then it would be chicken salad:  Perdue short cut Chicken, cream cheese, crushed pineapple, grapes, and almonds.  Easy peasy!

4. July 18th is National Get Out of the Doghouse Day...when was the last time you were 'in the doghouse'?
I thought I was going to be in the doghouse after I ripped off the top coat of the bathroom door when CH was gone, but I was able to "somewhat" fix it.

5. What television advertisement do you find particularly irritating or inappropriate? You may not answer with 'all of them'. I know some of you were thinking about
I can't think of one.  I even slept on this question, and still don't have an answer.  I saw that the commercial where the woman says, "Shut the front door" was offensive to some mothers, and they thought that was inappropriate, but I actually thought it was quite funny.  Lighten up, people.

6. Share one piece of interesting news from the year you were born.
I have to admit:  I looked this one up.  2 months, 2 days after I was born, Adolph Eichmann was hanged in Jerusalem.    From Wikipedia:
Eichmann was a German Nazi SS-Obersturmbannführer (lieutenant colonel) and one of the major organizers of the Holocaust. Because of his organizational talents and ideological reliability, Eichmann was charged by SS-Obergruppenführer Reinhard Heydrich with the task of facilitating and managing the logistics of mass deportation of Jews to ghettosand extermination camps in German-occupied Eastern Europe.
After the war, he fled to Argentina using a fraudulently obtained laissez-passer issued by the International Red Cross.[4][5] He lived in Argentina under a false identity, working for Mercedes-Benz until 1960. He was captured by Mossad operatives in Argentina and taken to Israel to face trial in an Israeli court on 15 criminal charges, including crimes against humanity and war crimes. He was found guilty and executed by hanging in 1962. He is the only person to have been executed in Israel on conviction by a civilian court.
7. What's the best part of your average day?
Dinner.  When all of the boys were home, that was the time of day that we were all together.  Even though most nights it's just CH, YS, & I, it's still nice to have that little bit of time together to talk about our day.

8. Insert your own random thought here.
Last night was our monthly "special ed ladies' dinner", and it just so happened we had a birthday girl: 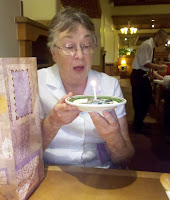 Our server was nice enough to put a candle in the middle of some Andes candies!  I guess Olive Garden isn't doing the complimentary piece of birthday cake any more!  She doesn't look 70, does she?
I took some hilarious video of 2 of the ladies acting somewhat inappropriately:  one lady was attempting to throw a straw wrapper down another ladies' shirt.  I promised her that I would delete the video, so I'm going to honor that and not post it.  We are professionals, after all!  So, you'll have to make do with this picture that's not the best quality because our server took it with my camera phone: 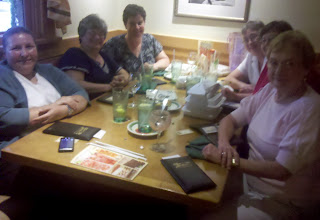 Since I'm not going to be at the same school as a couple of the ladies, I'm really going to look forward to these monthly dinners!