Apparently it's not too late to join in  with Stephani's Weekend Wrap-up!  I have no excuse for not getting this posted yesterday, other than pure laziness.  I'm really having a lazy summer this year!  And so, here's my wrap-up, as weak as it is! 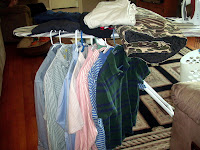 MS was so excited on Friday:  he went to the Habitat Store and got all this for $35!  6 button-downs, 2 polo-style shirts, 2 shorts, a bathing suit, Columbia long pants, and a camo vest.  All of the shirts are named-brands and look new.

Sunday, YS left for his last high school band camp.  It's a bit sad, knowing that this marks the beginning of his "high school lasts". 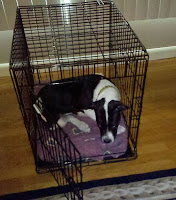 Crate training is going well with Laika.  After coming home last Sunday to some "minor" messes, I decided that enough is enough, and whether she likes it or not, she's going in the crate.  I think we're going to have to go up to the next size crate if she keeps growing. 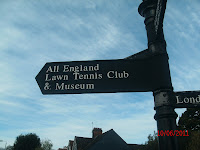 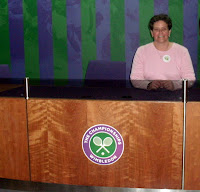 I watched a LOT of this little tennis tournament last week.  See where I'm sitting in the Press Centre?  That's where the tennis players sit for their interviews post-match.  It was so cool to finally see it on tv, knowing that I've walked through the Centre and seen, with my own eyes, Henman Hill, Centre Court, Court 1, and everything else they showed on tv.  CH can't believe that I still get so emotional recalling that visit.  Definitely one of the highlights of my life so far!

Yesterday was a bit of a bummer.  We had a wooden bar with 3 pegs on our bathroom door for towels that I've hated since the first day I saw it.  CH had glued it to the door after it fell off with the weight of 2 towels.  So, I decided to try to get it off.  The result was a splintered door.  YIKES!  Then, I decided to go ahead and put the over the door towel rack together.  Things were going great, but then one of the screws wouldn't go in because the hole wasn't big enough.  At that point, I was really frustrated, and decided to just give up.  After looking online, I "think" I can fix the door good enough to repaint it, which was my initial goal.  If that doesn't work, I guess we'll get a new door.  So...I'm off this morning to exchange the towel rack, and buy wood glue and wood putty.  Fingers crossed, everyone!

It's not to late to get involved in the Weekend Wrap-up!
Email ThisBlogThis!Share to TwitterShare to FacebookShare to Pinterest
Labels: dogs, MS, tennis, Weekend Wrap-up, YS