I have been so incredibly crazy busy lately.  Work has been crazy with placements, transfers, and annual reviews that it would have been nice to have had done when I started the new school.  And, on top of that, I feel like I'm basically starting the speech program at my new school.  I've been getting to work early almost every day, and leaving  late most days.
Last week I also had community band practice on Wednesday, and then a very special practice on Thursday night.  Friday night was the 75th Anniversary Celebration of the Small Town High School Band.  Thursday night we practiced a couple of songs on the field with the current band.  For the second song, one of my sisters (who was the drum major) directed next to YS. 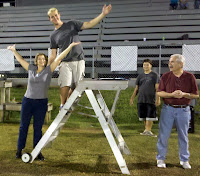 I was a bit disappointed that there weren't very many band members from my time to show up at the reception or to participate in the half-time festivities.  5 of the 6 members of my family who were in the band were there, though. 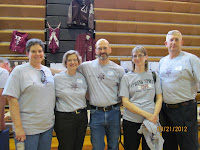 (Me:  flute & flugelhorn, #7 sibling: french horn & drum major, #10:  trombone, #4:  trumpet, and #6:  percussion)
It was a BLAST playing in the stands, although I had forgotten how loud it gets up there.  I had never played most of the stand music, so it was interesting sight reading the pieces.  Plus, the pace was a bit faster than I remembered. Maybe it was just that it was crowded since there were extra people in the band section.  It was still pretty fun, though. 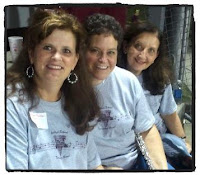 (3 "old" flautists from past bands)
I'm telling you, those that didn't participate really missed out!
Email ThisBlogThis!Share to TwitterShare to FacebookShare to Pinterest