Today, my baby is officially an adult.  I'm having a hard time believing that he's 18; I must be in denial!  YS was our "bonus" baby (despite what MS says, YS was NOT an accident!): we thought we had stopped after MS.  I tell people that God definitely has a sense of humor:  I just knew that MS was going to be born before my birthday that year, because I was NOT going to have a baby when I was 30.  He came late (a week after I turned 30), and then, 2 1/2 years later, we had YS.
I can't imagine life without him.  He was a 10 pound boy that I delivered naturally (not by choice!)  He has been a joy "most" of his life.  He definitely hasn't been as rowdy as the other 2, and is the most responsible of the 3 boys. 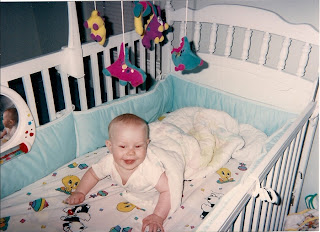 There was one time that we went to the beach.  We got in the car and were about 30 minutes down the road, when he asked, "Where are we going?"  Poor kid!  I guess by the 3rd child, you just tell him to get in the car and he does it without questioning where he's going! 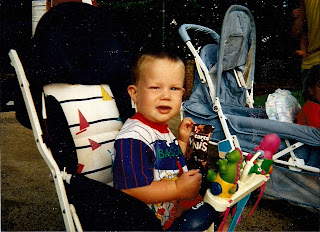 (Waiting for the Olympic Torch to come through our town in SC in 1996)
He was the one who picked out Ally; or rather Ally picked him: 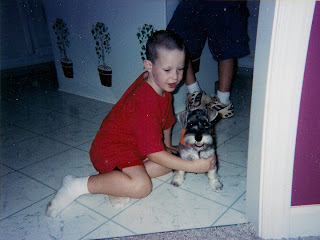 He's always been such a sweetie pie: 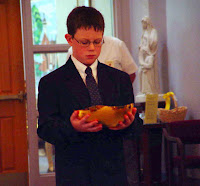 (He said he was scared to death he was going to drop the host!  He was chosen to carry it up to the altar during his 1st Communion.)
He tried football, but didn't like hitting people.

(The photographer told him to look mean.)
Not to worry, he found his niche; first with the trumpet: 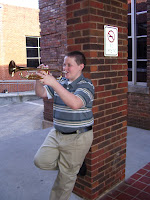 then switched over to the baritone after he got his braces: 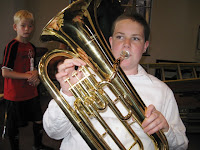 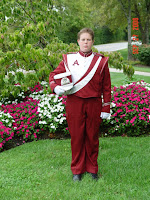 He's also shown us his talent with his cooking skills:

And responsible?  This kid wrote the book  (well, with MOST things!).  CH says he's the one we could give a checkbook to, make sure he knows how much money is in it, and he could live on his own without us worrying. 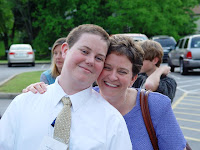 Within the past year, we've seen another big change with him.  He's grown very confident with himself.  He has always been a "don't rock the boat" kind of person, and he still is to a certain extent.  But, he has started to voice his opinions and to be able to back it up.  He has grown into this incredibly handsome, caring, responsible, funny young man. 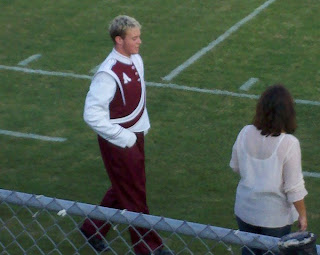 Happy Birthday, YS!  Oh, and, if you see this before I get to tell you:

(This is the song I used to sing to the boys when they woke up on their birthdays!)